When Worlds Collude - 3 (Bharatanatyam in Beijing)

Cultural cross-pollination is often boringly common in one direction, but rare and interesting in the opposite direction. Nobody looks twice at people from non-Asian cultures who wear white martial arts uniforms and learn Judo, Kung-fu or Tae-Kwon-Do. India, for example, has thousands of East Asian-style martial arts training centres.

As an example of a rare and interesting cultural flow in the reverse direction, a recent article in The Hindu drew attention to a Chinese dance teacher in Beijing who teaches about a hundred girls the intricacies of the South Indian dance form, Bharatanatyam (pronounced BHUH-ruh-thuh-NAAT-yuhm, with the first 't' soft and the second hard and with only one long vowel in the entire word).

Jin Shanshan was introduced to Bharatanatyam by the legendary Chinese dancer Zhang Jun, who had visited India in the 1950s. Ms Jin later visited India herself and learned from masters in the art, and today she runs a popular class of her own in China's capital, with plans to open another centre in Shanghai.

The Hindu also carried an interview with Ms Jin. 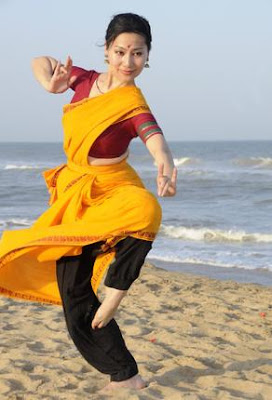 This is a video clip from The Hindu.

Extreme makeovers - It's amazing what a sari, a 'pottu' and chanting in Sanskrit can do to one's appearance

If I have a quibble, it's just that I think Kuchipudi is a more graceful dance form than Bharatanatyam. But I can't deny that I found this very pleasurable to watch.