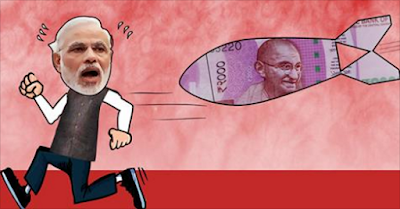 On November 8, 2016, Indian prime minster Narendra Modi announced a shock decision that he claimed would strike a blow against "black money" in the economy. He announced at 8 PM that 500 and 1000 rupee notes would cease to be valid by midnight, and that the only way to preserve one's cash would be to have these notes converted at a bank. This move promised to flush out all the unaccounted wealth held by people.

There were a few potential problems with Modi's approach, however:

The turmoil was further compounded by poor execution.


Along the way, as the government saw that most of the 500 and 1000 rupee notes were re-entering the system through bank deposits that appeared legitimate, it realised that its objective of exposing black money had failed. Either most of the cash in the economy was actually legitimate, or those with black money had succeeded in laundering it by using poor people as fronts.

About a month after the initial announcement, the government changed its tune to claim that the objective of the demonetisation exercise was actually to push India into becoming a "cashless" economy. In subsequent days, this claim too was toned down in the face of obvious logistical challenges, such as poor penetration of electronic payment systems, mobile networks and sometimes even electric supply. The currently stated objective is a "less cash" economy, which is a rather tame and uninspiring one when compared to the sound and fury that accompanied the initial announcement.

Where We Are Now


At any rate, what matters is that the Indian economy has been hit hard, and that brings us to the topic of this post. There are those (mainly upper class, city-dwelling folk) who believe that the situation will ease in the next couple of months as more cash in the form of 100 rupee notes is printed and released into the economy. Some have even argued that the economy is healthy because prices have stayed stable. But they are missing what has actually happened to the economy in the meantime.

Prices are stable today only because demand has been suddenly choked by a lack of cash. This is technically a period of recession, and it has been brought about by one executive decision. But supply has also been hit, and the full shock will be felt as the pipeline dries up. The economic hinterland has essentially locked up. Factories have closed due to lack of demand as well as the inability to pay workers in cash. Workers have returned to their villages to a lifestyle of subsistence while they weather the storm. Farmers have had no cash to buy seeds, and that has drastically reduced planting of the Rabi (winter) crop. There may not be an actual famine when the crop is due for harvest in February-March, but food prices will rise sharply because of the agricultural shortfall.

In short, the Indian economy is heading for a period of stagflation - the worst of all possible worlds. There will be high unemployment and prices will rise steeply. Many of the small business shutdowns today will end up being permanent because of creditors forcing asset selloffs. The shock will probably hit the country with full force after April 2017, once agricultural shortages from the inadequate Rabi harvest begin to be felt.

At that point, everyone (whether a supporter of Mr Modi or otherwise) will see what destruction he has wrought.

When a strong leader with little understanding of economics and a baseless faith in his own abilities takes such drastic decisions, an entire nation pays the price. In the past, we have only seen such tragedies play out in communist dictatorships (under Stalin, Mao and Pol Pot).

India is about to give the world an example from the ranks of the democracies.

As a postscript, it will be interesting to see who within Modi's BJP party fires the first arrow of revolt. I predict it will be the old patriarch, LK Advani, who will then be joined by several others who will snipe at Modi while taking cover behind Advani. If he survives the revolt, Modi will spend the last two years of his term as a lame duck prime minister, and it is very likely that he will have to return to his home state of Gujarat in disgrace after the 2019 election.

Posted by prasadgc at 23:28 No comments: