End As a World

I read a Science Fiction story long ago, a story called "End as a World" by FL Wallace.

The narrator is a young boy, who writes about a day when something big is about to happen. Nobody is in the mood to do anything important, because anything they do today seems so insignificant. A sign on the street says it all: "This is the day the world ends!" People are walking about, looking up at the sky from time to time, because whatever is supposed to happen is supposed to happen with a flash and a bang.

I got a very similar feeling from some emails I read on an alumni mailing list. One person posted a depressing link about a book called "Scatter, Adapt and Remember" (How humans will survive a mass extinction), with scary predictions like this:

Over the past four years, bee colonies have undergone a disturbing transformation. As helpless beekeepers looked on, the machinelike efficiency of these communal insects devolved into inexplicable disorganization. Worker bees would fly away, never to return; adolescent bees wandered aimlessly in the hive; and the daily jobs in the colony were left undone until honey production stopped and eggs died of neglect. Colony collapse disorder, as it is known, has claimed roughly 30 percent of bee colonies every winter since 2007.

Are we in the first act of a mass extinction that will end in the death of millions of plant and animal species across the planet, including us?

Another person posted a similarly depressing article by futurist Jaron Lanier that considered another angle, which is that technological efficiencies are eliminating jobs at a rate that will end up destroying the middle class and democracy itself.

And earlier this morning, I had read another depressing article by Nobel laureate Paul Krugman on how policymakers and the elite had failed to learn lessons from history and to apply economic theory wisely, as a result of which our economic woes are likely to continue and worsen.

It certainly seemed like a time for the world to end.


"Colony Collapse Syndrome was widely blamed on new-generation pesticides from Monsanto, Bayer and the like. After a long campaign (which was predictably opposed by the corporations concerned), Europe banned these pesticides for two years. Hopefully, this was the cause, in which case bee populations will recover and the ban will be made permanent."

Over the next 5 to 10 years, energy is going to get really cheap and plentiful. We are on the cusp of an energy revolution. New sources of energy (coal seam gas, shale oil), less ecologically disastrous ways of extracting them, and a tipping-point in solar energy economics, will all contribute to an energy glut.

Energy is the ultimate currency. Energy is the enabler and the multiplier of prosperity. It's literally true that everything on earth came from the sun. Solar energy is responsible for everything that exists today around us, both natural and man-made. Now we're going to have much, much more of that energy at our disposal. What will that mean?

First, let's understand the current crisis that Jaron Lanier is talking about, of technological improvements destroying the middle class by eliminating their jobs. We're not talking about impending scarcity here. We're only talking about the breakdown of a system that connected us as producers to ourselves as consumers. If it now takes fewer of us to produce, how will the newly-superfluous among us consume? That really is the only question. The answer is that we will have to overhaul the economic mechanisms that connect production to consumption. In other words, jobs. Yes, they'll probably go, but it may not be a bad thing. Because we're not talking about scarcity. We're talking about a crisis of plenty, or drastically improved efficiency. That can't be a bad thing. Disruption is not destruction, merely adjustment.

We already have a model of how such an economy might function. It's called the oil-rich Middle East. Income tax is zero in the Gulf states, because the government doesn't need citizens' money. It controls oil, and the revenues from oil are sufficient to buy prosperity for all its citizens. Indeed, the citizens of such states get sweetheart deals - exclusive landlordship of real estate, compulsorily enforced sleeping partnerships of businesses run by expats, etc. Expats come in and do all the work. The locals drive around in BMWs.

This is what the future could look like with cheap and plentiful energy coupled with massive technology efficiencies. Instead of expats, we'll have automation. All of us will be the locals. There will be enough resources to feed and clothe everybody. We won't have to work much to get all that food, clothing, housing and entertainment. In other words, the middle class could disappear. We just need to rewire our economic systems to create more of a welfare state. It's the only way to stave off violent revolution. I could live with that :-).

The energy glut is going to do some wonderful things. It can turn the world's deserts into farmland within 50 years. Have you seen the size of Australia and the percentage of its area that is inhabited? The country is effectively just tiny slivers of coastline. 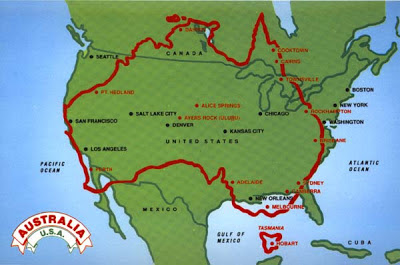 The difference is the clout that a populated interior delivers

Now deliver cheap and plentiful energy, enough to desalinate tons of seawater and irrigate the vast deserts in the interior. All of a sudden, we're talking about a continent that can house and feed 300 million people, up from 23 million today. This is what cheap energy means.

Yes, our world is going to end soon. And a better one will soon arise."

By the way, do you know how that story "End as a world" finally turned out?

And then it came, a flash across the sky, a silver streak, the biggest vapor trail there ever was. It went from this side to that side in no time. It split the sky and was gone before the shock blast hit us. Nobody said anything. We stood there and shivered and straightened up after the rumbling sound passed.
[...]
In front of me, old Fred Butler [...] cracked his knuckles. "He did it," he whispered, "All the way to Mars and back. Safe and right on schedule." He jumped up in the air and kept jumping up. [...] Factory whistles started blowing.
[...]
It was just like the papers said:
This was the day the world ended. And the Universe began.

Posted by prasadgc at 05:53 No comments:

Mirror Mirror (From Hollywood To Bollywood, And Back Again)

I've had the weirdest feeling after watching the Hollywood movie "Mirror Mirror", ostensibly yet another retelling of the Snow White fable. The last scene of the movie and the research I was compelled to do after it, transported me to the Punjab and thereafter to Iran and back again to the US. Whew!

The movie itself was reasonably watchable, although not the dramatically different viewpoint it promised to be at the outset when the wicked queen began narrating the story. Always alert to the angle of sexism, I was gratified to see the objectification of men (specifically one shirtless man) on an equal footing, although disappointed that Snow White did the cooking for the dwarves yet again.

The big surprise came at the end of the movie, when Snow White burst into song. It wasn't the fact that she sang. It was the flavour of the music. Can you recognise it?

"I believe (in love)" - A spiced-up Hollywood musical

I did a double-take. The lilting, catchy tune, the signature shoulder-twitch of the Punjabi dance - this had to be deliberate. But why would a Hollywood director slip in a cross-cultural piece like that? The mystery appeared to be cleared up a couple of minutes later as the credits rolled. The director was Tarsem Singh Dhandwar. Aha! That explains it all, I thought.

A spot of Googling turned up this review of the film:

Not often does Hollywood put out movies romanticizing tyrannicide and the assassination of foreign leaders of friendly countries, in this case India.  Julia Roberts is the wicked Queen, witch, and false pretender, but actually the stand-in for Indira Gandhi, with an uncanny resemblance of look and dress in the final scene (I wonder if anyone told her?). This movie presents a romanticized and idealized version of how her assassination should have proceeded and should have been processed, namely in a triumphal manner with no reprisals but rather celebration and joyous union and love.  As the plot proceeds, you will find all sorts of markers of Sikh theology, including numerous references to daggers, hair, mirrors, water, immersions, submersions, bodily penetrations, transformations, the temple at Amritsar, dwarves who enlarge themselves, and the notion of woman as princess, among many others; director Tarsem Singh knows this material better than I do (read up on Sikh theology before you go, if you haven’t already).

The silly critics complained that the plot didn’t make sense, but from the half dozen or so reviews I read they didn’t even begin to understand the movie.

Without wishing to take sides on either the politics or the religion, I found this a daring and remarkable film.  The sad thing is that no one is paying attention.

The Sikh angle on Indira Gandhi made a lot of sense. After all, in the real world, the assassination of India's former Prime Minister was followed by a pogrom in which more than 3000 Sikhs were killed. Tarsem Singh is a Sikh, and his portrayal of Indira Gandhi as a wicked witch is not only understandable, but enthusiastically endorsed by many, many non-Sikh Indians (myself included).

However, the song itself had many more layers to it. The first surprising fact I learned was that it was sung by  Lily Collins (the actor who played Snow White) herself. The second was that she is the daughter of none other than Phil Collins.

Then I read that the original version of this song was sung by an Iranian singer called Googoosh. Tarsem Singh had heard Googoosh's rendering of it in his childhood, and he wanted this in his film. This is a clip of Googoosh from the mid-70s singing "I believe (in love)".

OK, so it isn't Bollywood, then. Is that what Persian music sounds like?

(So that's what pre-Ayatollah Iran looked and sounded like. In hindsight, the Shah seems to have been quite a modern bloke, the kind of leader the Middle East sadly lacks today.)

But the mystery went even deeper. This article says that after a very long hunt, the original songwriter was found, and it turned out to be an American woman called Nina Hart.

So what I watched was a Hollywood movie, which had a song at the end that sounded like a Bollywood song, but that was because the movie's Indian director heard it in his childhood sung by an Iranian, who it turned out was singing a song written by an American.

I believe (in situational irony).

Posted by prasadgc at 05:42 No comments: