The New Vegemite is Quite Nice

I guess one of the items on the Australian citizenship test ought to be "Do you like Vegemite?", with anyone answering "No" not only rejected but also deported. It seems to be one of those items that definitively differentiate Australians from non-Australians. 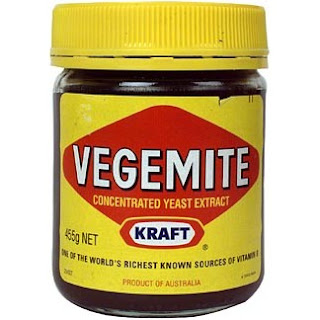 I've learnt to sort of like Vegemite. It's an acquired taste. I can tell why a lot of people do like it, but while I can eat a vegemite sandwich without wincing, I must confess it's not my favourite spread either.

That's why I was interested when Kraft came out with a New Vegemite with a lighter taste. 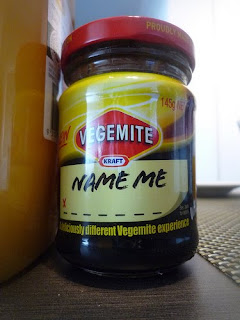 I tried it and was hooked. I've finished my first bottle within a week of buying it, and replenished the kitchen shelf at once.

How do I describe the taste? It's like vegemite mixed with cheese spread. The harsh salty taste of classic Vegemite is softened, so much so that one can eat a spoonful of the stuff straight. Did I say I was hooked?

Kraft had a "Name Me" contest but I saw the notice too late. The contest had already closed, and we have to wait a while to see which name won. I was going to suggest "ButterMite" to suggest a much smoother Vegemite.

I'm sure "real" Aussies will turn up their noses at this imposter and call it "un-Australian". I don't care. I'm a first-generation migrant and my tastes are an unabashed mixture of the Australian and the un-Australian :-). Perhaps the ones who take to the new Vegemite and make it a success will be others like myself. In which case, the morphing of Vegemite will reflect in microcosm the larger demographic changes happening across Australia. The old Vegemite isn't going away. Both brands will co-exist, and that again seems to me symbolic of the peaceful integration of the new with the old. 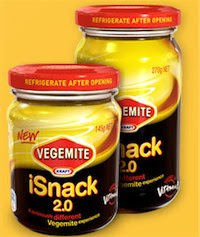 With all due respect, Kraft, I think my idea of "Buttermite" would have been better.

Posted by prasadgc at 06:16 No comments: