The Cold War and the threat of nuclear armageddon inspired most of post-World War II spy fiction. English language readers generally heard the Western side of the story with British and American heroes, and I'm sure there were equally gripping novels available on the other side of the Iron Curtain featuring heroes with names ending in -sky or -vitch, as PG Wodehouse would have said.

Considering that the threat of nuclear war today arises mainly from the Indian subcontinent, it's surprising that we haven't so far seen much spy fiction set in this region.

That long drought may soon be coming to an end. Two recent debut novels by Indian authors, featuring heroes from the Indian spy agency RAW and their escapades in neighbouring Pakistan, provide some welcome analysis, however fictional, of the issues that bedevil the South Asian region. 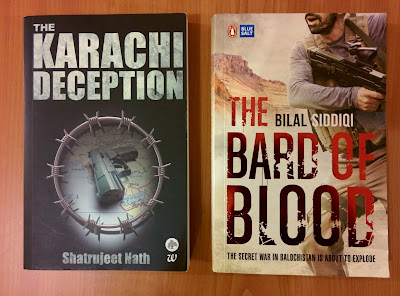 [I reviewed Shatrujeet Nath's second novel on this blog in January. This book is a work of mythological fiction - "The Guardians of the Halahala".]

Without giving away the details of either story, let me just say they deal with topics that should be very familiar to Indian and Pakistani readers.

The name Dawood Ibrahim is notorious throughout India. Ibrahim was a Mumbai-based don who fled the country when the heat on him began to increase. He is believed to have been responsible for the Mumbai blasts of 1993. He has been sighted in the UAE on occasion but is now believed to be hiding out in Pakistan.

In The Karachi Deception, Irshad Dilawar is the thinly-disguised equivalent of Dawood Ibrahim, and the story is of a group of RAW agents who are sent into Pakistan to eliminate him. Of course, nothing is ever straightforward in a good spy novel, and there are twists and turns galore.

The separatist movement in Pakistan's province of Balochistan is likewise well-known in the subcontinent. Pakistan has long accused India of providing support to Baloch separatists, a charge that India denies. However, given Pakistan's own barely secret support for separatism in the Indian state of Kashmir (and its equally stout denial), Indian citizens would not be surprised at (and may in fact welcome) their government's tit-for-tat involvement in Balochistan.

The Bard of Blood is largely woven around the Baloch separatist movement, although it involves characters from the larger AfPak region, such as Mullah Omar of the Afghan Taliban. Again, the story focuses on a group of RAW agents on a mission to Balochistan, and there is betrayal and intrigue here too. There is a scene featuring a meeting between the fictional Indian prime minister Shailendra Patel and Chinese president Zhou Bocheng in Ahmedabad, a sly reference to the actual meeting of Narendra Modi and Xi Jinping in the same city.

Both books weave historical and contemporary facts with fiction to create an engaging story. Needless to say, the villains in both novels are members of Pakistan's spy agency ISI (Inter-Services Intelligence).

It is important to note that Bilal Siddiqi, the author of The Bard of Blood, is just twenty years old! This novel is a terrific accomplishment for one so young.

Having said that, Shatrujeet Nath's is by far the more polished work. The sophistication of the plot, the quality of the language and the richness of the atmosphere evoked by The Karachi Deception are first rate. This is not to say that The Bard of Blood is amateurish. It is also a very readable novel, but there are definitely better books in the author's future. Siddiqi is a good twelve years younger than Nath was when he wrote his first book, so he can certainly look forward to producing more sophisticated writing as he matures.

One thing I must say, though. I am a strong believer in quality as evidenced by the little details. Sloppiness in English grammar and composition detracts greatly from the overall impression of a book's quality, and Bilal Siddiqi should definitely get himself a more conscientious editor. There were at least three glaring errors of language in his book (apart from the constant and erroneous reference to the Baloch people as "Balochis").

3. On page 151, there is a reference to the "draft itinerary" of an important meeting. That should of course have been "draft agenda".

I'm pedantic about English, so these kinds of mistakes can ruin a book for me. I hope Siddiqi fixes these errors in the next edition of the book, and ensures that such mistakes don't mar his future writing. Shatrujeet Nath's novel has a couple of typos in it, but fortunately nothing more egregious.

I did enjoy both books, and would recommend them to other fans of the spy genre as well as to those interested in South Asian politics. Here's looking forward to more subcontinental spy fiction from these and other authors. It would be good to see Sri Lanka, Burma, Nepal and China included in the ambit of future stories, since they no doubt play a role in real-life covert operations in the region.
Posted by prasadgc at 06:14 No comments:

India Has No Excuse

I was shocked to read recently that China's GDP is 5 times that of India's. Five times! Not 20% more, not 50% more. Five times more!

How? How did a country with roughly equal population, and that was at roughly the same level as recently as the 1980s, end up doing not just slightly better, but so much better?

Why couldn't India achieve something comparable? If India's GDP could have been just three times what it is, can you imagine how many hundreds of millions of people could have been lifted out of poverty and into the middle classes? When you look at it that way, you have to conclude that a crime of incalculable proportions has been perpetrated on the Indian people.

I often hear Indians claim that India is poor because it was looted by its British colonialists for two hundred years. But the example of China shows that up as a mere excuse. The British left India two generations ago. Since then, if we compare India and China as two independent countries in charge of their own destinies, the British are nowhere in the picture. If China could progress so much in the same time, what's India's excuse?

Besides, being looted is hardly an excuse when one looks at countries like Japan and Germany, which were both utterly devastated and left in ruins after the Second World War ended in 1945, with a significant portion of their able-bodied men killed or turned into invalids. Yet in less than twenty years, both countries had not just restored their industrial strength but had also established themselves as manufacturers of quality. Being knocked down is no excuse for staying down.

There are those who will blame Nehru (who died way back in 1963) or the socialist policies of the Congress party. These excuses might be valid in a dictatorship. In a democracy, where people have a right to judge the performance of their government and to regularly reward and punish political parties based on their assessment, where does the buck stop?

I can only conclude that Indians' expectations have been too low for too long, and that they have suddenly woken up and realised that the rest of the world has passed them by. The one comparable country in terms of civilisational past, size of population and parity two generations ago, is now five times their country's size.

The blame lies with the expectations, attitudes and will to action on the part of Indian citizens.
Posted by prasadgc at 15:35 No comments: