One of the most feared subjects back when I studied engineering was Strength of Materials.

I can see why people have trouble with the concept. I'm willing to suspend disbelief when entering an alternative universe, such as religion, science fiction or fantasy, but the narrative must not strain credulity by violating premises beyond the alternate reality it proposes.

Take the narrative of Lord Krishna, who shelters the villagers of Vrindavan from a storm by holding up Mount Govardhan like an umbrella with his little finger. OK, I'll buy the divinity of Krishna, but not the rigid body assumption for the mountain. We're probably talking Krishna with a muddy finger, and crushed villagers here.

Ditto with the original Superman movie. OK, the guy has super-powers from our yellow sun, I'll buy that. What I won't buy is the strength of the steel used to build helicopters on planet Earth. You can't lift a helicopter by its slender landing pylons. What the movie should have shown, realistically, is Superman looking down in dismay at a helicopter wreck below, holding a piece of landing pylon in his super-strong hand. 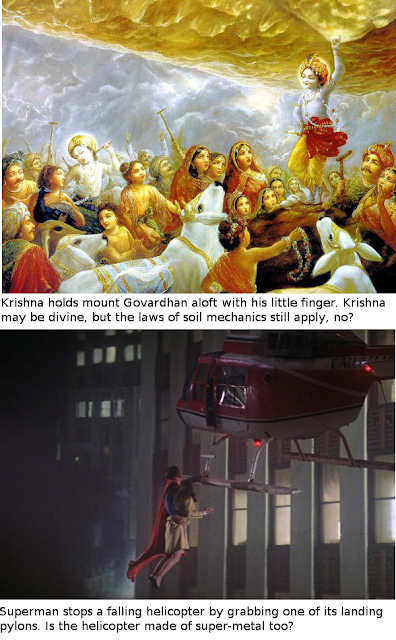 Religions and movie-makers had better lift their game. Too many people nowadays have actually cleared Strength of Materials.
Posted by prasadgc at 07:33 2 comments: