The Indic Identity - What It Is And What It Isn't

My exploratory thoughts on what an Indic civilisational identity could look like attracted some appreciation but also some critical comment.

I would like to expand on one set of related comments, which is that the Indic identity should more properly be called the "Dharmic" identity, which is a name that has recently come into vogue (I suspect, thanks to the influential writings of Rajiv Malhotra).

Fundamentally, I disagree with this.

First, I disagree on a personal level because an atheist like myself simply cannot believe the mystical ideas that are axiomatic to the dharmic worldview - an all-pervading supreme consciousness that underlies all of creation itself, the immortal atma or soul, karma or the law of cosmic consequences, and so on.

Hence the "dharma" part of the Dharmic identity is completely alien to me. Some well-meaning Hindu friends have attempted to tell me that one can be an atheist as well as a Hindu, since Hinduism is a very broad church. Well, it's heartwarming that a certain worldview accepts mine, but honesty prevents me from reciprocating. The metaphysical aspects of the dharmic philosophy make no rational sense to me, and so I cannot accept them.

In order to explain this statement, we will need to step back a fair bit.

A course called "Careers, Roles and Identity" that I enrolled in at management school turned out to fundamentally alter my worldview and show me new ways of looking at things. The definition of Identity that I learnt here has revolutionised my personal philosophy. Identity, I learnt, is "the meaning you give to the situation in which you find yourself".

This is revolutionary because it turns the whole notion of "Who am I?" on its head. Who I am turns out to have nothing much to do with any objective attribute of myself, except what I think is important, - which then makes identity entirely subjective. Two people may have had almost exactly the same social, cultural and economic background as well as near-identical life experiences, yet they could form very different identities simply because they looked at these situations and events differently.

My theory of shared identities builds on this model. It deals with how we view ourselves in relation to other individuals. We subjectively evaluate (1) our similarity of appearance (which is influenced by race or genetics), (2) how we see ourselves in terms of a group narrative or community history, and (3) the set of ideas that we agree on. This is our mental model which makes us feel that we "belong" to a group, and also the extent to which we feel we belong.

Genetics can be thought of as "hardware" and cannot be easily changed except through generations of cross-breeding. However, genetic identity is based on a subjective view of our racial appearance and what it means to us. This explains why family, tribe, clan and ethnic group tend to be such powerfully emotive grounds for a feeling of belonging, even in the case of individuals with whom we may have had no prior relationship. At the same time, since genetic identity is subjective, loyalties to family, clan or ethnic group cannot be deterministically predicted.

Received history can be thought of as "firmware". It is largely immutable, although secure and enlightened individuals can consciously revise the model of their own group history, perhaps even identify with another group's narrative.

Thoughts, ideas, theories and ideologies are "software". They are much less "fixed", although many may endure for life.

Together, genetic identity, shared community history and one's current set of ideas and ideologies form one's mental model. Again, secure and thinking individuals constantly revise and refine their mental model of themselves and the world. 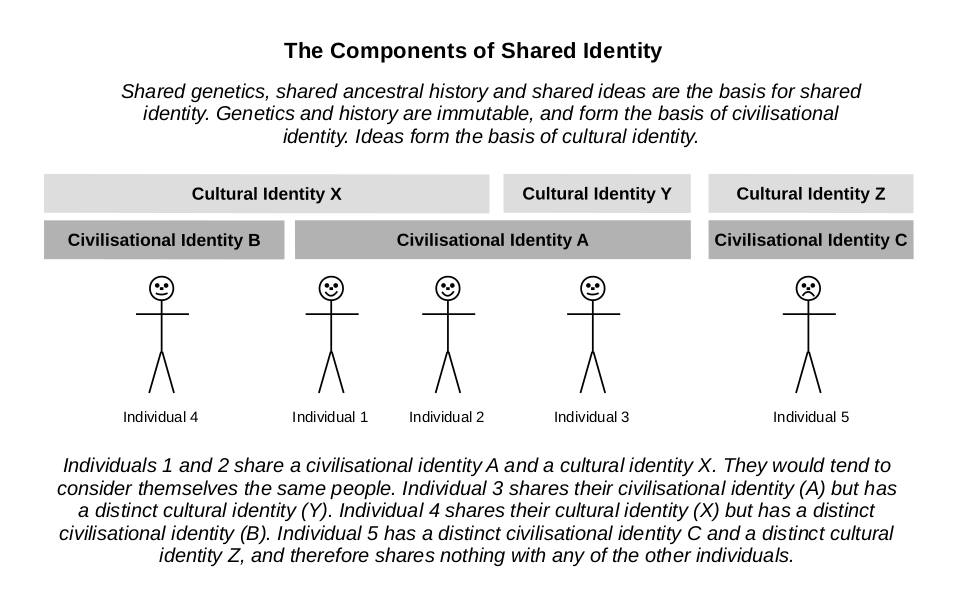 Western civilisation, for example, could be thought of as being made up of a Caucasian racial identity, a shared Hebraic/Hellenic historical identity and commonly held ideological beliefs such as a belief in democracy, the rule of law, individual rights, etc. (I will explain the terms Hebraic and Hellenic in a minute.) Two Caucasian individuals with the same cultural background would tend to see themselves as the same people, especially in contrast to other individuals who do not share either or both identities. Other ethnic groups may share specific ideas and philosophies with individuals belonging to Western civilisation, but there is a natural limit to such self-identification, mainly because of differences in racial and historical background. African-Americans, for example, cannot exclusively identify with Western civilisation even after generations of cultural conditioning, because the racial part of their identity, based on their genetic hardware, draws them back to their African roots. Besides, many of them have a community narrative based on the experience of slavery, which prevents them from identifying completely with their Caucasian compatriots.

The example of African-Americans brings us to the important concept of hybrid identities, especially in relation to the notion of authenticity.

Authenticity is a key concept that I want to address, because cultural purists (usually from the right of the political spectrum) have a simplistic idea of identity. To them, hybrid identities are marked by confusion and are therefore inauthentic; only "pure" identities are authentic. But such simplistic ideologies are dead at the starting gate, because there are no pure identities. All identities are combinations of genetic, historical and ideological views of oneself. They are all subjective and are hence software. The ideas underpinning them have evolved and grown through interplay over millennia. Therefore purity of identity is a chimera. Not only is it a chimera, any "pure" culture is, ipso facto, stagnant and dead. All living cultures are malleable and fluid. As they cross-pollinate through ideas, hybrids form all the time. By definition, all these hybrids are authentic. It is "pure" cultures that are inauthentic, and this is also by definition, since pure cultures only exist in the imagination.

Typically, the cultural make-up of an individual draws from multiple groups of related ideas. Religion and language are two of the two most powerful markers of self-identification, along with gender identity.

Cultural layers can coexist in spite of inherent contradictions (e.g., religious faith and training in scientific rationalism). Also, like any software, any strand of cultural identity can be modified or even removed completely.

The "dharmic" identity has a genetic basis, being associated with people from South Asia and to a lesser extent Southeast Asia. It also has a unique historical narrative (although one with parts that are in dispute, such as the Aryan Invasion Theory) and a set of core metaphysical and abstract philosophical beliefs. It could conceivably form a civilisational identity, but it is unlikely to be a good one.

The first problem, of course, is obvious when one looks at the social reality of the Indian nation-state to which this identity is proffered.

There are people who are part of the Indic civilisational identity who would feel left out of a purely Dharmic cultural identity. These include not just Indian Christians, Muslims and atheists, but also people, mostly Muslim, from other South Asian countries.

Besides, the Dharmic cultural identity is not inherently egalitarian towards all the individuals that it includes. 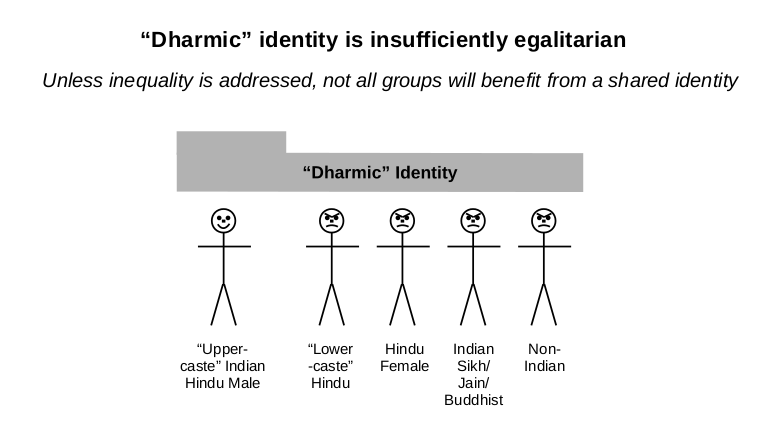 Women, the so-called "lower" castes, non-Hindus and non-Indians could all feel like second-class members of this group because of entrenched biases in the social culture that is enmeshed with the core dharmic philosophy. It is hard to separate out abstract philosophy from social prescriptions when the two come tightly bound in a single cultural package.

It is far more powerful to adopt the Indic civilisational identity as a basis of a shared identity, since many more individuals can accept this, and undesirable elements of culture can be dropped without one's core identity being threatened. Some individuals, of course, will also have a dharmic cultural identity, with the specialised characteristics of their particular faith shaping this identity more finely. but they will not be "more equal" than others who share their civilisational identity, which is the problem when a common dharmic identity is sought to be imposed on all. 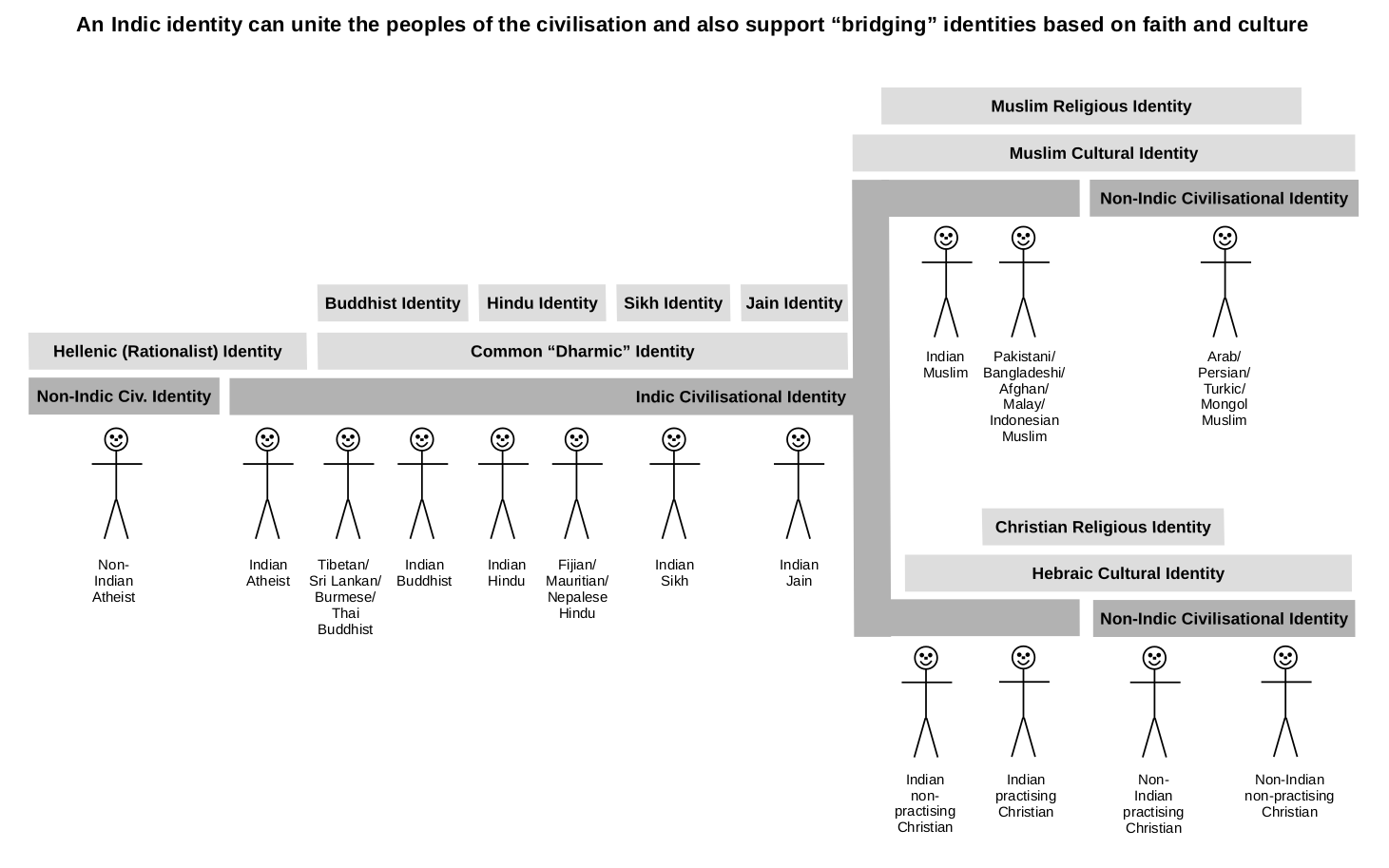 As a contrast, it is useful to look at the Western identity. It is simpler than the Indic one, but it is not monolithic either. 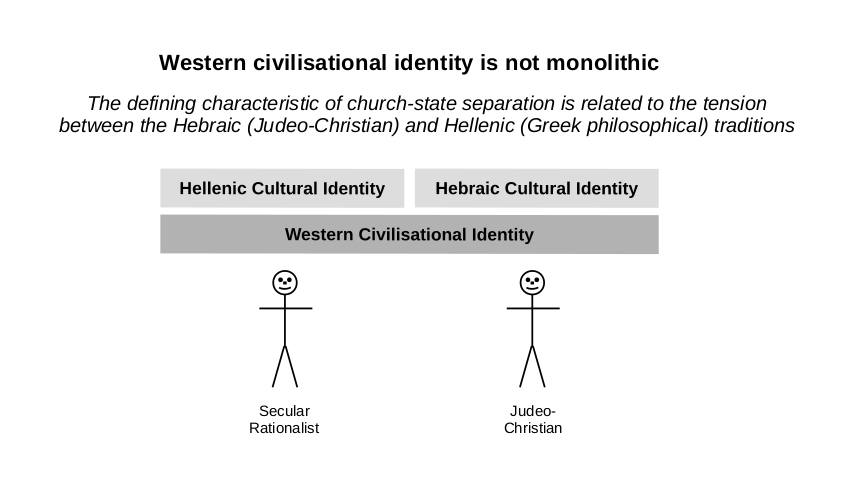 Western identity consists of a shared civilisation identity (Caucasian genetics and European history, in the main) but with two mutually opposed cultural identities, the Hebraic and the Hellenic. The Hebraic culture refers to the Judeo-Christian tradition that underpins the two major religions of the West, Judaism and Christianity. The Hellenic culture refers to the rational schools of philosophical thought that originated with the ancient Greeks. The tension between the Hebraic and Hellenic cultures is reflected in the separation of church and state in the modern West. Western society reflects Western identity.

Similarly, although the (Han) Chinese appear to have a monolithic identity, there have been many cultural influences that have shaped their identity/identities. They share a racial identity and a historical narrative (e.g., the invasion and subsequent repulsion of the Mongols, the "century of humiliation", etc.) The two sets of indigenous cultural ideas are Confucianism and Taoism. The former emphasises duty, hard work and the importance of social structures and hierarchies. The latter emphasises oneness with nature and an ability to "go with the flow". These are quite distinct philosophies. In addition, Buddhism is a third influence imported from India, which stresses compassion and the renunciation of desire as the means to a fulfilling life. Finally, Communism was a twentieth-century import from Europe, and a version of this philosophy endures to this day.

Civilisational and cultural identities need not result in constant conflict. The world sees shifting alliances based on shared (or not shared!) values. This implies that groups of people with no common civilisational identity could ally with one another based on shared cultural identities. Opposition to a common group that is more alien to two parties than they are to each other could also lead to political alliances.

To find one's place in the world, one needs to establish an identity that is self-confident yet respectful of others on equal terms. The model of the Indic civilisational identity described above, which layers cultural identity above civilisational identity, provides the maximum scope for individuals to engage effectively with one another to form groups and build bridges, to find commonality where it occurs and to be respectful of difference when none is found.

Posted by prasadgc at 03:00 No comments: