I came across this picture on Facebook today and it made me think about my consciousness of my own identity. 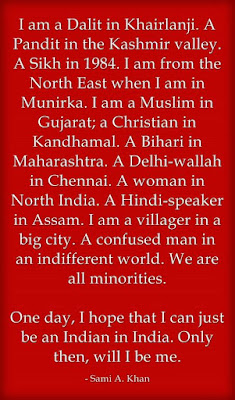 Sami Ahmad Khan has stated poetically what I have unconsciously felt for a long time.

Right from my childhood, I have at various times been conscious of being a Tamilian in Karnataka, a brahmin in Tamil Nadu, a South Indian in Bombay, Ahmedabad and Kanpur, as well as a Hindu and an Indian in the UAE and Australia. Throughout my life, I have always had the slightly uncomfortable sense of belonging to a minority and of having to keep my head down to avoid drawing attention to my minority identity. On occasion, in each of these environments, I have had to endure my community being slandered in my presence while feeling powerless to speak up.
I have also briefly been in a place where "my kind" was in the majority (CMC Ltd, Madras), and I hated it. The conformity that was implicitly demanded offended my sensibilities. In my own mind, I have a complex and hybrid identity that refuses to be slotted into any box.
I therefore believe that Utopia is a place where *everyone* is in a minority. This isn't unachievable. My first place of work (CMC Ltd, Bombay) was almost exactly such a place. No linguistic/regional group dominated, not even Maharashtrians. There were almost as many women as men in all roles including management (My first two bosses were women). And while it was majority Hindu, there were quite a few Muslims, Christians, Zoroastrians, Jains and Sikhs in the office to prevent that from becoming a stifling cultural presence.
Hopefully, sharing my background will allow people to understand where I come from whenever I wade into the culture wars as a "liberal".
Posted by prasadgc at 02:45 No comments:

Is "Rabid Atheism" As Bad As Rabid Religiosity?

I posted on Facebook in response to a news item that Sylvester Stallone had sent his family to Haridwar in India to perform a "shradh" (Hindu funeral rites) for his son Sage, in the hope that his son's soul would attain peace.

I posted that in order to comment on the human need for comfort in times of grieving, which a purely rational way of thinking (which is what atheism is) cannot provide, even though it is probably the truth.

Atheism is too bracing a truth to offer needed comfort to grieving people. That explains why religion continues to have such a hold on humanity. The Hindu ceremony is no more valid than a Christian funeral service, because there really is nothing after death. But I do understand why Stallone would seek out ways to find comfort.

How do you know there's nothing after death? Have you been there and back? Rabid atheism is as stupid as rabid religiosity. I would leave individual souls to seek out their own truth, whatever that turns out to be.

Let me answer this in two parts.

First, atheism is not a belief. It is the refusal to believe in ideas that have no evidence to back them up. Perhaps the term "atheism" is too emotive for many people. Let's just call it rationalism then, with no loss of accuracy.

Do you believe that after you shut down your computer, Windows (or whatever your operating system is) continues to run somewhere "up there"? You surely know that an operating system, although an intangible thing ("software"), only runs when electricity flows through the hardware circuits of your computer. When the computer is down, the operating system simply cannot be running.

Research has also shown that the brain consumes energy when experiencing thoughts and feelings. It is very like a computer that requires energy to process information. In fact, it's an exact analogue.

Isn't it therefore highly unlikely that there is no such thing as a thinking, feeling, disembodied soul? Just because the belief in a soul is widespread, it does not mean it is true. On the contrary, it simply means the majority of humanity is not thinking logically. This may be a hard idea to accept, but as the saying goes, truth is sometimes bitter.

Second, here's why rationalists can't simply "leave individual souls to seek out their own truth".

Implicit in the question is the argument that beliefs, however irrational, are benign personal affairs that should be no one else's business.

Indeed, personal beliefs are every individual's own business, except when they manifest themselves as impositions on other people.

This is exactly what religious beliefs do. They don't remain benign, personal beliefs for long.

"My religion says apostasy is a crime punishable by death. So if someone from my faith says they no longer believe,  they must be killed."

"My religion says the cow is holy and eating its meat is a sin. So I am justified in lynching you because I think you may have eaten a cow's meat."

This is why rationalists cannot sit back and let people maintain their irrational beliefs. Because sooner or later, those "personal" beliefs start to affect the lives of other people who do not share them, and who have a right not to share them.

So no, there is no such thing as "rabid atheism". Uncompromising adherence to logic is not rabidity.

And no, atheism is nowhere near as bad as religiosity.
Posted by prasadgc at 16:48 No comments:

Three Levels Of Failure Of The Indian Polity

The Dadri lynching incident and its sorry aftermath have exposed the failure of the Indian polity at three different levels, although this may not be obvious to a casual observer.

The three levels are:

1. The principle of a secular state
2. A law-abiding citizenry
3. The machinery of law enforcement

A secular state would not have laws restricting what citizens may do based on respecting religious sentiment. In the recent Indian context, a ban on cow slaughter on religious grounds is incompatible with the principle of a secular state (although such bans may be possible to justify on other grounds, such as cruelty to animals).

The ban on cow slaughter on grounds of Hindu religious sentiment is therefore the first failure.

Even with a ban imposed on religious grounds, a tragedy such as the Dadri lynching need not have occurred if the citizenry had been law-abiding and not susceptible to inflammatory sentiments whipped up by mischievous demagogues. A complaint could have been made to the police, who could have investigated to determine if the ban had in fact been violated. If it had, the person or persons concerned could have been charged and brought before a court, which may have found them guilty and sentenced them to appropriate punishment under the law.

The mob lynching of Mohamed Akhlaq was therefore the second failure.

The actions of police in sending meat for forensic analysis (implying that the presence or absence of beef had a bearing on the severity of the crime), and those of ruling party and government functionaries all the way up to the prime minister (who failed to call out the actual crime and instead made all kinds of excuses and worse), were therefore the third failure.

The first step to correcting a problem is analysis. It is clear that India needs to introspect and determine whether it wants to be a secular state with a law abiding citizenry and impartial, competent law enforcement.

Posted by prasadgc at 17:05 No comments:

I recently read an interesting review of the movie "Parched", and posted about it on Facebook.

The post elicited an interesting response from a male friend, who seemed a bit uncomfortable about some of the bold statements in it. He expressed reservations about what he called the "feminist agenda". When I countered that the so-called "feminist agenda" was about nothing more than equal treatment of the two sexes (which is hardly sinister), he made a couple of statements.

"If equal treatment was warranted then nature would have made us all [the] same."

"Men and Women are not sub-groups. They together make humankind. No matter how much we try both these pillars will remain different and that's what nature intended."

I realise I may not be doing justice to his views based on two statements lifted from a conversation, but I would like to share what I posted in response to them:

This is going to take a while to explain but it may be worth it, so I request your patience.

There are sociological theories about this that stem from a fundamental difference between the sexes, not so much physiological but the relative difficulty of establishing paternity as opposed to maternity.

The mother-child relationship is readily recognised, because a woman's pregnancy and childbirth are events that are not easily hidden. In contrast, the father-child relationship is not readily recognisable, because conception is a very private affair! It is the desire to establish paternity beyond doubt that has led to severe restrictions being placed on women. To put it bluntly, women's eggs may only be fertilised under controlled conditions that establish paternity. That is the real reason why women are not allowed freedom of movement, freedom to mingle with members of the opposite sex, or in general, sexual freedom.

Further, this patriarchal system institutes severe punishment for those women who slip past these restrictions and attempt to have their eggs fertilised outside of the controlled conditions prescribed for them (i.e., marriage). That's why we have shaming of women in extramarital or premarital relationships, poor treatment of "illegitimate" children, and extreme punishments like "honour killing". (Indeed, in matriarchal societies, there is no such thing as an illegitimate child, because every child has a mother!)

Knowing this history, we can understand both why patriarchy does what it does, and why it is a highly unfair system. It is born out of the insecurity of men to establish paternity. Restricting the freedoms of one half of humanity is too high a price to pay to satisfy that insecurity. It is far better to educate men to overcome their insecurity over paternity than to continue to restrict women's freedom, which includes their sexual freedom.

It is not as if the patriarchy benefits men uniformly, either. While men do get a better deal than women overall, the patriarchy also unfairly constrains what men may or may not do. This is why many men consider it unacceptable to cry, and why we have such an epidemic of unreported male depression in society. This is also why less evolved societies look down on stay-at-home dads, whereas men and women should be free to decide the roles that are appropriate for their families.

So I really do not see anything sinister in the "feminist agenda". In fact, I embrace it wholeheartedly, because the patriarchy is an unfair system that disadvantages all of us. You are right that men and women are built differently, but we can see how an unfair system has developed because of this difference. It takes a very minor change to get rid of this system, and it pertains to how men deal with their insecurities about the need to establish paternity and the need to control women's sexuality. This is an individual conflict every man must resolve within himself.

This was based on what I remembered reading a long time ago on the patriarchy stemming from the need to establish paternity, so I searched for references and finally found this.

I think this is an important set of ideas for everyone to understand, especially men. The patriarchy disadvantages us all (women more than men, certainly), so the sooner it is dismantled, the better it will be for society.
Posted by prasadgc at 17:21 No comments: