I came across this article recently, which purported to offer six reasons why intelligent people couldn't find happiness.

As someone who has scored creditably on IQ tests in the past, I took a personal interest in what it had to say. To cut a long story short, I don't believe a simplistic characterisation of people as "intelligent" is sufficiently meaningful to predict their predisposition to happiness. I believe happiness is more a function of personal philosophy, and I can vouch for that because my own philosophy has undergone dramatic change over my lifetime, and it has had an effect on my perceived state of happiness.

You can read the article for yourself, but here's my analysis of the six main points.

I used to be one, and it did cause me to brood over minutiae, but now I rely more on big-picture thinking, especially what I like to call the "Jupiter-Saturn philosophy".

In mythology, Jupiter is wise and jolly (the word 'jovial' comes from Jove, which is another name for Jupiter). He sees everything in the world, and it gives him cause for cheer.

Saturn is wise but melancholy, hence the word 'saturnine'. He sees the world too, but it only gives him cause for gloom.

But now, if both Jupiter and Saturn are wise (i.e., they both know all that is worth knowing), how come their outlooks on life are so different? Who is right?

My answer is that Jupiter is right. Happiness is one of the primary goals of existence (some would argue that 'meaning' is the primary one). Since both Jupiter and Saturn see the same objective reality, but Jupiter has clearly chosen to frame his subjective reality in a way that makes him see the brighter side and be happy, it is clear that he is wiser. Saturn, in fact, is a fool. Who else would choose to be unhappy? The Jupiter-Saturn philosophy strongly suggests that happiness is not a function of objective reality but one's subjective interpretation of it. We can choose to frame each situation such that it gives us cheer. Why not do it?

As a second safeguard against over-analysis, I delegate more of my decision-making to objective criteria, such as statistical data, trends, expert opinion, etc. In other words, if my gut feeling makes me feel bad about a situation but objective criteria tell me there is nothing to worry about, I comfort myself with them and ignore my gut feelings. Most of the time, my fears turn out to have been baseless after all.

This may sound paradoxical, but I'm simultaneously optimistic and pessimistic. I believe that things get better over time, and that we are living in the best of all times. At the same time, I don't expect that things will go smoothly for me when I undertake something.

I don't know when I developed this habit, but I now tend to forgive myself easily. I recognise that I'm no better and no worse than other people. I can make the same mistakes that others do. It happens. We have to learn lessons and move on.

I have a personal philosophy of "from now forward" that prevents me from wasting time brooding about the past and what I could have done differently. I merely resolve not to make the same mistake again, and concentrate on what to do next, now that I am where I am.

I don't understand why this should cause unhappiness. On the contrary, it gives one a set of goals. I always have something exciting to look forward to (personal projects that I've planned for myself), and a set of achievements in the past that I can look back on with satisfaction.

This is actually less of a problem today than in the past, when interactions were limited by geography. Today, it is possible to have deep and meaningful conversations with people in other parts of the world, and to find like-minded people virtually anywhere. Social media has been a boon to me. I interact on a daily basis with some amazing people, many of whom I have never met in person.

I can't comment on this since I'm not a professional psychologist, but "existential depression", insofar as it's not a clinical condition, can be corrected by reframing. It is true that life has no inherent meaning and that we have not been put on this earth for a purpose, but it is equally true that we give our lives whatever meaning we choose. I have found this to be a profoundly liberating philosophy. There is no cosmic authority to satisfy or disappoint. We are free to do what we set ourselves to do.

Finally, since I believe happiness itself is the goal, if a person fails to have happiness in spite of all the necessary conditions for it, it must be concluded that the person is not in fact intelligent.

There is empirical evidence for this. The biggest longitudinal study of gifted people (the Terman study) found that most gifted people were happy, even though not all of them achieved positions of eminence. It tells me that gifted people tend to acquire a self-awareness that allows them to be at peace with themselves. In fact, I find it amusing that people would even want to look for correlations between giftedness and achievement, since achievement is often driven by a sense of discontent. In the choice between contentment and achievement, contentment is therefore preferable - by definition.

Posted by prasadgc at 22:22 No comments:

What Are The Second And Third Order Effects Of Demonetisation? 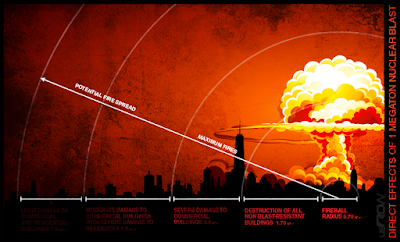 There are reports from major Indian cities that the queues at banks and ATMs have greatly reduced, and that one can walk up to an ATM and withdraw the new 500 rupee note without any delay. With this, many observers feel, the worst of the demonetisation pain is over, and the country will shortly return to normal.

Nothing could be further from the truth. In fact, the worst is yet to come. The optimism is a delusion of those living in a metropolitan bubble.

What has eased is the "first order" effect of demonetisation - the shortage of cash. If the government had prepared adequately for the demonetisation exercise by having sufficient stocks of 100 rupee notes and new 500 rupee notes to exchange, and had been able to effect the exchange within two weeks, the ill-effects could have been contained fairly easily. However, the significant duration that it has taken for this problem to abate (two months) has created second order problems, which in turn will create third order problems.

What are these second order and third order problems?

These are the two second order problems.

The demonetisation shock hit just when farmers were in the middle of buying seeds to plant the Rabi crop. Part of the planting had happened, but the latter half was disrupted. The Rabi harvest is due in Feb-March, so the shortfall is going to be seen when the crop reaches the market. Food price inflation will start in April 2017.

2. Massive unemployment in the small-scale and unorganised sectors

At least 35% unemployment has already been reported. Migrant labourers have left for their villages to better ride out the storm through subsistence farming. Factories and shops have closed.

Many of the closures will be permanent because creditors will have to be paid, forcing asset sell-offs. Therefore, unemployment will not ease significantly in the short term.

These two conditions together are known as stagflation, which is what India is heading towards.

But this is not all. When farmers and small enterprises suffer sustained operating losses, they lose their ability to repay their loans. This then translates into the following third order effects.

As loans to small businesses and farmers turn bad, banks will suffer increasing proportions of Non-Performing Assets (NPAs). This will curtail their ability to offer credit, ensuring a prolonged recession.

As the banking sector weakens, the country's sovereign rating could also be downgraded. This will make it harder to attract foreign investment, further dampening growth prospects and prolonging the recession.

In short, India is likely to see the second order impact around April 2017 in the form of rising prices and widespread unemployment in the small-scale and unorganised sectors. The second half of 2017 will see the start of a prolonged recession, which is the third order effect.

Two people deserve to be marched from their desks in disgrace - Prime Minister Narendra Modi and RBI Governor Urjit Patel. Modi's feat will have been as a turnaround manager. He will have turned a boom into a full-blown recession in about 6 months. Urjit Patel will be remembered as the man who could not say no.

Update 14/01/2017: I have created a cartoon mashup to illustrate what I think will happen. 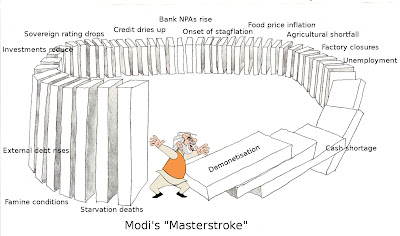 Posted by prasadgc at 20:09 No comments: