The Presumption Of Innocence Applies In Criminal Court, Not In The Polling Booth

For a while now, a friend of mine has been making the very persuasive argument that it is defamation and character assassination for people to keep accusing Narendra Modi of involvement in the 2002 Gujarat riots, since the accusation has been examined in great detail by the courts and dismissed as being without merit. What's more, since the prosecution has been supported by a very hostile Congress government and an investigative agency (the CBI) coopted by this government, the clean chit he has received should be all the more convincing.

Of course, the court in question is the Ahmedabad court in Modi's own state of Gujarat where his writ runs unchallenged, so one does not have to be a cynic to imagine the heavy hand of the state government tipping the scales of justice. Such things are not unheard of.

Nevertheless, my friend's argument has been weighing on my mind. Is it unfair to persist in making accusations once a court has ruled a person innocent?

It now strikes me that he overstates his case.

In a criminal case, a defendant is presumed innocent until proven guilty, and such proof has to be "beyond the shadow of a doubt", not just circumstantial or "on the balance of probabilities".

However, in civil cases, there is no concept of "guilt". The person being accused is not called a "defendant", nor is the opposite side called the "prosecution". The players in a civil case are the "plaintiff" (the person making a complaint) and the "respondent" (the person responding to the complaint). The judge does not rule on the guilt or otherwise of the respondent. The judge either "finds for the plaintiff" or "finds for the respondent". To reach this conclusion, the judge does not require proof that is "beyond the shadow of a doubt". The conclusion can be reached "on the balance of probabilities" based on evidence that may be circumstantial. Further, if the judge finds for the plaintiff, the respondent is not "punished", but only pays "damages". An adverse judgement in a civil court carries no danger of jail time, only a fine.

An excellent example of this distinction was seen during the OJ Simpson trials of the '90s. After a lengthy trial in a criminal court, Simpson was acquitted since the charge of murder (of his wife Nicole) could not be proven "beyond the shadow of a doubt". Shortly after his acquittal, Nicole's family took him to civil court, where, "on the balance of probabilities", a charge of "wrongful death" was sustained and Simpson had to pay damages to her family. The outcome pleased many, because while everyone "knew" that OJ Simpson was guilty, the evidence available was insufficient to punish him according to the law. However, a degree of justice was done.

I think we are in a similar situation today with Narendra Modi. The fact that Modi has been a lifelong member of the RSS, an organisation not known for its amity towards Muslims (or Christians), will forever colour the way he is seen with respect to the riots. Like in the OJ Simpson case, it is a matter of "knowing" he is guilty while being unable to legally prove it or ensure punishment.

But does this mean, as my friend seems to suggest, that there can be no reason now for anyone to refrain from voting for Modi? The answer, I think, lies in the analogy with the civil court.

Modi has been acquitted in a criminal court and therefore cannot be punished with a jail term. But the court of public opinion is more like a civil court where every voter is a judge. Here, circumstantial evidence and the balance of probabilities may be reasonably applied to reach a conclusion. If a voter finds against Modi, he may impose a penalty on him - his vote.

In 1960, the Democratic Party ran a brilliant campaign that cost Richard Nixon the election. The poster that did the trick turned out to be prescient, since later events proved that Nixon was indeed untrustworthy. 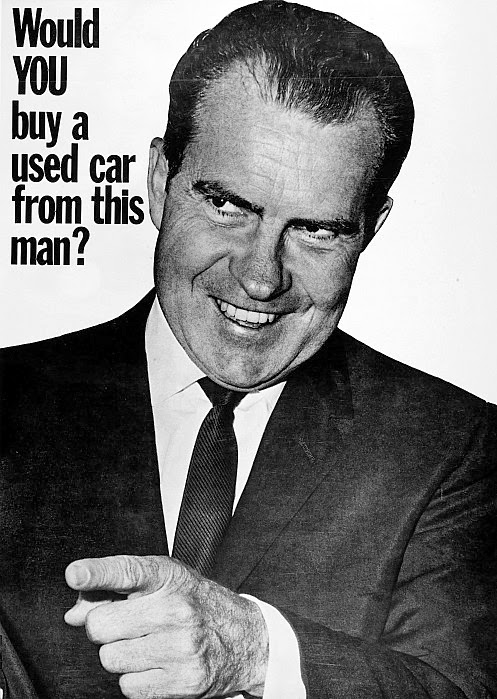 In retrospect, this was not character assassination at all but a friendly warning to the electorate

Yes, Narendra Modi cannot be sent to jail for the Gujarat riots, and it may be time to give up efforts on that front. But there is no reason why a voter cannot deny him a vote. It is entirely reasonable to do so "on the balance of probabilities". Unlike former prime minister AB Vajpayee, a known softie who remained largely neutral in spite of his membership of the RSS, there is nothing soft about Modi. Indeed, his toughness is one of the bragging points of his followers. 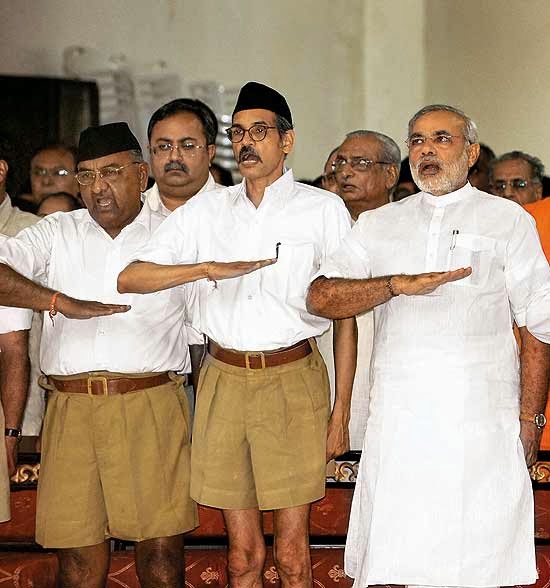 Do you trust this man to be an inclusive leader?

On the balance of probabilities, the social fabric could be damaged beyond repair with this man as PM. All of his economics and all of his efficiency cannot put a broken country together again.
Posted by prasadgc at 01:23 No comments: