In a recognition that the Asian Century is upon us, the Australian government has commissioned a policy white paper on the place of Australia in the new Asia.

Let's not be distracted by GFC II or any short-term economic crisis sweeping the world. Over the medium to long term, there is going to be a massive shift in the make-up of the world, from being mostly poor to being mostly middle-class. (Whoopee!)

What's interesting is that the bulk of this middle-class will be from Asia. [What's also interesting is that while the aggregate spending of this Asian middle class will be huge, an individual family will still be highly budget-conscious, because they still won't be as well-off as a Western middle-class family. That calls for a very different product and marketing strategy to sell into this market.]

The rise of Asia is therefore a significant shift in the world's centre of gravity, and Australia would be wise to plan for it. This is in fact a welcome development for Australia, since the historical "tyranny of distance" that the country has suffered from has now been replaced by the "advantage of adjacency", as the Economist puts it. Australia is now closer to the action than any other Western country and should take full advantage of it. Given that Australians still don't have a high awareness of Asian societies, how they work and how to work with them, perhaps the white paper will spur the necessary investments in education and the like to better gear up the country.

The related controversy is around the notion of "Big Australia" (i.e., should Australia aim for a population significantly above its current 20 million?) and immigration policy. The relative advantages of size versus sustainability will be fought over for a few years at least. Regardless of which side is "right", it's important that Australia begin to have this debate. The stakes are high and the potential payoffs enormous.

I like it when debates are about planning for prosperity rather than about problems.

Posted by prasadgc at 19:42 No comments:

They say learning a different language, especially in one's fifties, keeps the brain nimble and may prevent the onset of Alzheimer's and other conditions. They also say one should try and learn a language whose script, vocabulary, grammar, etc., are very different from one's own. The logic being that learning similar languages will simply reuse old neural pathways in the brain and not create new ones. That's why many Westerners have favoured learning Japanese. It has until recently been the most "useful" non-Western language. Perhaps Mandarin will overtake Japanese soon in this department.

And this is an entirely unscientific assertion, but perhaps this is why I had never heard of Alzheimer's while in India. Everybody there is at least bilingual. And if an Indian knew English, Hindi and a South Indian language, they would know languages from three linguistic families with completely different morphology and syntax.

I was reminded of all this when I saw an out-of-office autoreply from a person on one of the mailing lists I'm subscribed to. This is in French, and I did attend a semester of French at college, but I would think any English speaker could decipher this using the "neural pathways" they already have:

A few familiar words (if spelt slightly differently) and a well-understood context, and the message becomes completely comprehensible. Even the "Bien à vous" sign-off seems to translate to the Aussie "Good on ya" (though it probably doesn't mean the same thing!)

As Mr Spock would say, fascinating.

Posted by prasadgc at 18:19 No comments:

Germany's Sacrifice to Save Europe

Autism and the Engineer's Brain

The August 29, 2011 issue of Time magazine had an article "Could new marriage patterns explain autism?" I was intrigued, and read it with interest. The full article is only available to subscribers, but a summary can be found here.
The theory is that a certain type of autism (i.e., Asperger's syndrome) is remarkably similar to the normal functioning of an engineer's brain. Quite aside from the ribbing that engineers are likely to receive from their spouses and others thanks to this theory, there is a serious implication to this.

In the late 1990s, [researcher Simon Baron-Cohen had] come to believe that a common cognitive profile — a tendency toward what he called systemizing (focusing on systems and how they work), combined with noted deficits in empathy, or the ability to read and relate to others — existed both in people with autism and, to a much lesser extent, in many of their relatives. He'd begun to theorize that this sort of brain type would be common in any population that brought people with very strong math, science and tech skills to cluster together — and to think that if these high systemizers were choosing one another as mates, they might be particularly likely to have autistic children.

The article goes on to describe research from the Netherlands, where a survey of schoolchildren from three similar regions (i.e., similar by area and socioeconomic profile) - Eindhoven, Haarlem and Utrecht - showed that two to four times as many children in Eindhoven had been diagnosed with autism compared to the other two regions. Eindhoven is known as the Dutch Silicon Valley and has a higher concentration of IT workers and engineers compared to the others.
The article also says the change in marriage patterns (i.e., more marriages between engineer types) does not adequately account for the rise in cases of autism, so one shouldn't rush to conclusions here. However, this could be one of the factors responsible.
The article prompted me to think about myself anew. I'm comfortable with the way I think, because that has always been me, but the article was a bit of a jolt. Did I have a brain that was "normal" for an engineer but also autistic to some degree? The prospect was a bit chilling, because it implied that had I married another engineer, our children, with reinforcing traits from both parents, could very likely have been autistic. As it happened, my wife turned out to be an accountant with a brain that functions (exasperatingly to me) totally unlike that of an engineer! Our son was assessed as moderately gifted but not autistic. Of course, I also derive lots of pleasure from interacting with people, so perhaps I myself have balancing traits. I believe this is referred to in the literature as a "strong female brain" (though why they don't call it a "sensitive male brain" is beyond me).
I began to see myself a bit differently after reading that article. For instance, I have always had a breakfast of eggs and toast in the same way for many years (the routine is itself a telltale sign, I guess). I watched myself recently as an impartial observer as I went about fixing this breakfast, and I realised that "normal" people would go about it very differently. The many steps along the way are probably undertaken unthinkingly by normal people, but to me, they represented problems that had certain solutions that were superior to others. I had to find the "best" solution to each of these problems before I could have a satisfactory breakfast.
Here are three of the "problems" I identified when fixing myself a breakfast of fried eggs on toast. I wonder how many people can identify with this kind of thinking.
Problem 1: How to take two eggs out of a box of twelve
To most people, this is not a "problem". Just take any two eggs out of it and put the box back in the fridge! But this was a serious issue to me. I thought about it in many ways before arriving at the "correct" solution. If someone else takes eggs out of the box anytime in-between, I have to rearrange them to get them back to a "correct" configuration, and I absolutely hate it if an odd number of eggs is left in the box. 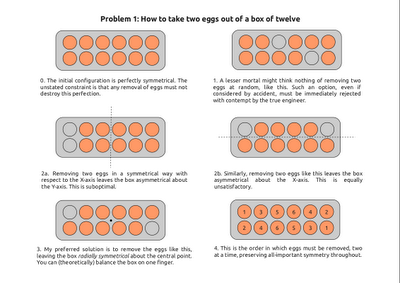 Problem 2: How to place a fried egg on a slice of bread
This is a fiendish problem! There is no clean way to place something circular (infuriatingly, not perfectly circular!) onto something square without bits sticking out. But I did find a solution to that, too. 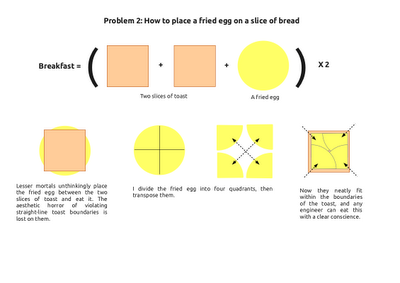 Problem 3: How to apply ketchup to a sandwich
After getting the eggs out of the box correctly and placing the fried egg on the bread equally elegantly, it's time to add ketchup. This is another hard problem, and the many solutions I tried were all unsatisfactory. Finally, I hit upon one. This is not symmetrical (which bugs me a little), but it has characteristics of uniformity on average. I'm pragmatic enough to settle for a "good enough" solution. 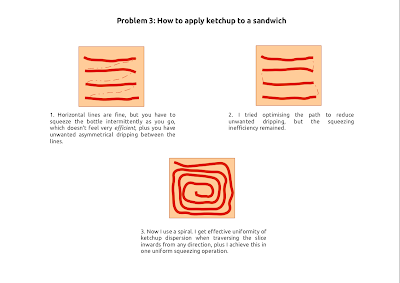 This is what I have been doing for years, and this is perfectly natural to me. I solved all of these problems years ago and I enjoy the satisfaction of an elegantly and "correctly" prepared breakfast every morning.
But then I read the article on autism and saw myself doing all this, and I thought to myself, "Oh...my...God!"
Posted by prasadgc at 22:00 5 comments: