I'm not a fan of India's Gandhi family (no relatives of Mahatma Gandhi), much less a fan of the Gandhi dynasty. I think a democracy doesn't need to look to a single family to provide continuing leadership. [Of course, I'm also against reverse-discrimination, so if members of the Gandhi family choose to stand for election and win, I don't see why they shouldn't be allowed to rule.]

Well, at any rate, since the international press is going on about Rahul Gandhi being the son, grandson and great-grandson of former Prime Ministers, I thought I'd put together a photo collection of the dynasty, and just for kicks, I've used postage stamps wherever available. We still don't know if Rahul Gandhi will be PM. Maybe his sister Priyanka will. At any rate, here's the clan: 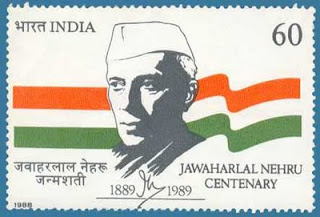 He's the only prime minister from the family whom I actually admire. The man was a true democrat. It was thanks to his idealism that India survived as a democracy during its difficult infancy. So many other "great" leaders of newly-independent European colonies went down a very different path (e.g., Nkrumah of Ghana, Soekarno of Indonesia, etc.) Lots of people today criticise Nehru for taking India down a socialistic path (more correctly, a mixed economy), but I think that was the right choice at the time. Government was the only agency with the funds and the vision to develop the country. It was also correct for India to liberalise and move to regular market capitalism after a few decades, once basic economic stability and depth had been established. 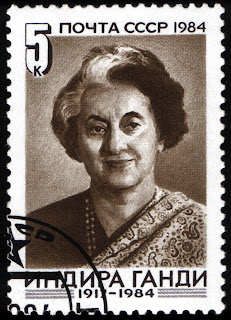 I never liked her. Unlike her father, Indira Gandhi did her best to destroy India's democratic institutions. Fortunately, by then, Indian democracy was mature enough to withstand her attacks and ultimately outlast her. The postage stamp is from the former USSR. The Indo-Soviet love affair was at its height during her reign. Again, I think that wasn't a bad thing for the time. Better Brezhnev than Nixon. 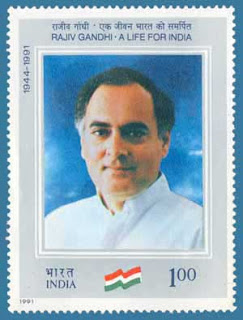 I didn't think much of him either. Indira Gandhi was undemocratic, but she was at least competent. Rajiv did not even have competence to recommend him. I was sorry, though, when he was assassinated by a suicide bomber of the Sri Lankan Tamil Tigers. [It must be doubly satisfying this week for Rajiv's widow Sonia Gandhi. Her party won re-election, and the Tamil Tigers were finally defeated and their leaders killed.] 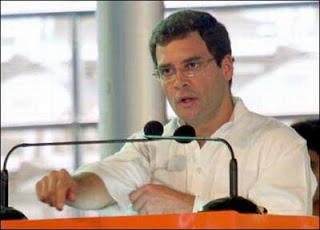 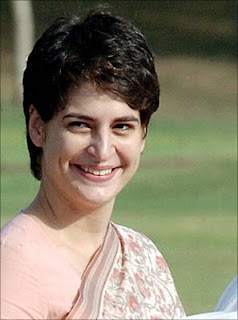 I don't know much about the Gandhi children. They seem decent enough. But then, so was their father Rajiv, until he became PM. In a few short years, he had turned from "Mr. Clean" into a cynical politician like all the rest.

Now we'll see if PM Manmohan Singh turns out to be a mere seat-warmer for Rahul or Priyanka. Well, the people get the government they deserve.

Posted by prasadgc at 04:56 No comments:

Notes on the 2009 Indian Election

So the exit polls have been proven wrong, and India has ended up with a more decisive election result than predicted. The ruling Congress party and its allies will probably be able to stitch together a relatively stable coalition government without having to rely on support from ideologically different groups such as the communists. Perhaps in the present economic climate, India needs decisive leadership more than it needs checks on the government's power.

A few quick observations on the election and what it may mean:

1. Dr. Manmohan Singh was much more impressive in his earlier incarnation as India's Finance Minister under former Prime Minister P.V. Narasimha Rao (1991-1996) than as Prime Minister himself in the last 5 years. I'll be charitable and attribute the relative lack of pathbreaking reform during the last five years to the fact that a dependence on leftist coalition partners tied his hands. Now that that excuse is no longer available, the new government had better deliver.

2. The election seems to have strengthened the centrist parties and weakened both the left and the right. I think this is a good thing given these troubled times. Governments need to be pragmatic and relatively unencumbered by ideological baggage. Let's hope the new Congress government is able to do what's right for the country without being caught up in endless ideological debates.

3. Shashi Tharoor, the former (unsuccessful) candidate for UN Secretary-General, said in a speech after his record win in Thiruvananthapuram that these were the "accountability elections". Where governance was good, incumbents won. Where it wasn't, they lost. Tharoor was gracious and honest enough to point out that this was as true for his own party as for others. I agree with his analysis. The Indian electorate certainly seems to have voted for good government.

4. I wonder if there will be pressure on Dr. Manmohan Singh to step aside partway through his term to make way for Rahul Gandhi, the scion of India's "democratic dynasty". Although I'm against dynastic rule, I think this may in some ways be an improvement. I'm no longer young, so I probably shouldn't be accused of ageism when I say India's political leadership is a generation older than the demographics of the country would justify. The old need to give way to the young. Plus, I think Dr. Manmohan Singh would be far better as an advisor than as a leader. As the old saying goes, academics should be on tap but not on top.

5. Lastly, a moment of unabashed gloating in the achievement of my native country. India has shamed all the countries in its neighbourhood with yet another smooth election, all the more remarkable for its sheer logistics and relative absence of violence. These neighbours have a hard act to follow. India has also shamed many western countries that continue to rely on paper ballots. The 2004 and 2009 elections have shown that electronic voting machines can and do work even in large and diverse countries with significant numbers of illiterate voters. The actual voting process necessarily took time to organise (5 voting days spread over a month to cater to over half a billion voters), but the tabulation and announcement of the results got over in less than a day.

What next for India? It's very, very early days yet, with the results having just been announced. The days that follow will show how things unfold.
Posted by prasadgc at 07:36 No comments:

Wisdom Dawns on the Importance of Market Liquidity

I've been crying myself hoarse for years about the need for liquid (i.e., competitive) markets. A free market does not mean a laissez-faire market. It means a market that is guaranteed to be liquid, with plenty of buyers and sellers, and with no player large enough to influence prices through its actions alone.

The recent noises emanating from the Obama administration are a welcome indication that this lesson has been learnt. The world has paid - is continuing to pay - a very heavy price for the state of market illiquidity that has resulting in some players becoming too big to fail.

We need aggressive antitrust, not just in the interests of fairness, but in the interests of our very survival. I hate to argue by pandering to practicality over principle, but that seems to be the only argument that works. Monopolistic and oligopolistic markets are unfair, but that doesn't seem to bother people. Monopolistic and oligopolistic markets can lead to systemic collapses that end in a deep recession - that probably gets more people to take notice and act.

The European Union recently acted boldly in fining Intel over a billion Euros for abusing its monopoly in computer chips. We need more such action against all monopolies, not only other IT monopolies like Microsoft but its counterparts in every industry.

By keeping markets liquid, we keep them healthy and our livelihoods safe.

Posted by prasadgc at 05:52 No comments:

I saw Star Trek over the weekend at Castle Towers Megaplex.

In short, the only thing that prevented me from being wowed by the movie was the fact that all the reviews I had read had prepared me to expect something pretty good. The fact that the movie lived up to the hype was ironically a bit of an anticlimax.

I've been a Star Trek fan since the early eighties, when the series started showing on Indian TV. The only thing that managed to knock Star Trek down my list of favourite TV shows was Star Trek - The Next Generation, which began airing in the mid-nineties :-).

The new movie directed by JJ Abrams takes us back to the original story and provides us a newly-minted background to the characters of the Enterprise crew. It's very slickly done, although I do have a few quibbles. I would hardly be a Trekkie if I didn't ;-).

I don't have to provide a standard synopsis of the movie. There are plenty of others available. Here are my quibbles alone, but keep in mind that they in no way detract from the impact and appeal of the movie. You should go and see it on the big screen, even if you aren't familiar with the genre. It's very beginner-friendly.

On to nitpicking, then.

1. A prequel should try and be consistent with its future history. To a large extent, Star Trek succeeds in "backporting" its future characters' idiosyncrasies back to their newly-presented roots, but there are glaring exceptions. In Star Trek IV - The Voyage Home, the crew lands on Vulcan, and Spock has a conversation with his mother. JJ Abrams's prequel not only kills off Spock's mother but all 6 billion denizens of Vulcan, along with the planet itself. It's going to be hard to watch The Voyage Home again without feeling acutely uncomfortable. Abrams shouldn't have done this to us.

2. Captain Pike is in a wheelchair at the end of Abrams's movie, and has already become Admiral. The Cage and The Menagerie are still ahead of him. Is he demoted, does he get out of the wheelchair only to go back to it in time for The Menagerie, or is this another Pike? Highly illogical.

3. The human-Vulcan quandary affecting Spock seems to be resolved too soon. It's not until The Voyage Home that Spock is supposed to "feel" fine.

4. Spock designed the Kobayashi Maru test. I'm fine with that. But the point of it was for the cadets to learn fear? Spock wants Starfleet officers to learn lessons through an emotion? Illogical again.

5. And what's with the Uhura business, anyway? There's not a hint of anything between Spock and Uhura in any of the original episodes, so how are they going to explain the cooling off that surely must have happened after the Abrams movie? Perhaps there will be sequels to the prequel that will resolve this. Advice to the director: don't start anything you can't finish.

There were many nice touches I did enjoy. Bones gives us another variation of his "I'm a doctor, not a with physicists duly lining up for the honour this time. On the other hand, there were many opportunities for him to say, "He's dead, Jim," but he passed them all up.

Jim Kirk can't resist anything in a skirt, even as he's about to pass out in sickbay. It's pretty hilarious, though I've often wondered if that isn't a fatal character trait for a ship's captain. (Picard, by contrast, is a gentleman who will even carry his guests' bags and he gets my vote over Kirk every time.)

Spock's reluctance to say "Live long and prosper" to his own past self on the grounds that it would be "self-serving" is pretty wry and shows that Vulcans understand humour after all.

The villain Nero is very casual whenever he hails Federation ships. He's so informal you'd almost expect him to go, "How'ya doin'?"

One final nitpick. I would have appreciated an explanation of why there are no seatbelts on starships in the twentythird century. I was hoping the prequel would explain that. Oh, well.

Posted by prasadgc at 07:41 No comments: