How Conscience Made A Vegetarian Eat Beef

I had beef for lunch today.

This may not sound like a big deal to most people, but to me, it has been a very, very big deal.

You see, I have been a lifelong vegetarian. Meat of any kind has been alien to my diet.

So why did I eat meat today? And why did I choose beef of all things?

To answer that question, we need to dig a little into culture, and into what we ultimately hold most sacred.

I was born in India to a Hindu family. To Hindus, cows are sacred animals. Killing a cow is widely considered a sin, although there are many Hindus today who do eat beef.

My family belongs to the brahmin caste, which has a tradition of strict vegetarianism. Even eggs are considered taboo by most brahmins. Thanks to my upbringing, I have always been vegetarian. Call it cultural conditioning.

(For the record, I am against the caste system and I do NOT identify myself as a brahmin. I only bring up that historical fact because it is relevant. I want to illustrate the weight of tradition that I defied today, and why I did so.)

The May 2014 election in India brought to power a right-wing Hindu party (the BJP) that seeks to assert the Hindu nature of Indian society. This militant brand of political Hinduism is called Hindutva (just as Islamism is the militant political flavour of Islam). One of the explicit planks of Hindutva is a ban on cow slaughter. The state government of Maharashtra has since banned the sale and consumption of beef throughout the state. Other BJP-ruled states have begun to make moves in the same direction. In general, these pro-cow measures also have a covert anti-Muslim agenda, since Islam, unlike Hinduism, has no injunctions against the killing of cows.

Two days ago, on the outskirts of the national capital New Delhi, a Hindu mob gathered at a temple to a rallying call that claimed that a certain Muslim family had killed a cow and had stored its meat for food. The mob descended on the family dwelling, dragged out a 50 year old man and his 22 year old son, and beat them brutally. The older man died and the son was admitted to hospital in a critical condition. All this for the "crime" of eating beef. The gruesome incident is reported here, here and here.

In an ostensibly secular democracy, a twisted political version of Hinduism has taken hold of a large enough group of people that those who are going about their business eating the food they have always eaten are now in danger of losing their lives.

This incident has outraged me. It has outraged me so much that I have to do more than just write words against it. It finally occurred to me this morning what I needed to do.

As soon as I had the idea that I would have to symbolically eat beef, I at once knew both that it was the right thing to do, and that it would be one of the hardest things I have ever done. I confess I suffered trepidation as lunchtime approached, but I stayed firm. I reminded myself that courage is not the absence of fear but the quality of marching on in spite of fear. 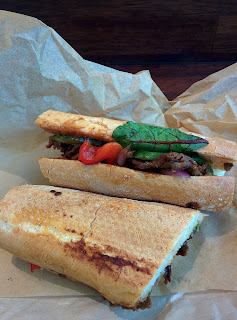 A single beef baguette, cut in half


I sat down at a secluded table and prepared to eat. I will not pretend that this was easy. I was afraid I might throw up at the first bite. Indeed, there were three or four moments when I almost gagged, but I fought the instinct and continued until I finished. My burning anger kept me going. 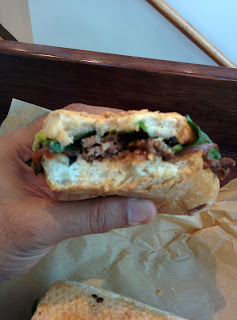 The first half being eaten... 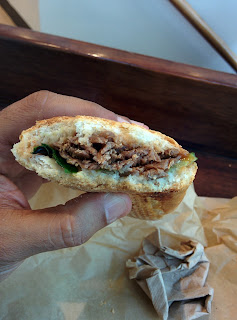 And that was that. I was born Hindu and have been a lifelong vegetarian. But today, for the first time in my life, I ate beef. I may never eat beef again in my life, but it was terribly important to me that I do it at least once. My conscience demanded it. A secular democracy where people can do whatever they please as long as they don't harm others - that is something that is extremely sacred to me. It is my sacred cow, one might say.

I ate beef today in order to make a statement, and the statement is simply this:

F**K YOU, BLOODY HINDUTVA A***OLES! YOU DO NOT SPEAK FOR ME, AND I WILL NOT STAND BY AND LET YOU DESTROY THE COUNTRY OF MY BIRTH!

Update: Less than an hour after my lunch, I saw the following regional Australian newspaper lying on a desk in my office (I work for a media company). It seems to support my theory that the entire universe is a simulation running on a computer somewhere, and that its operating system employs "locality of reference" to reuse recent patterns rather than create all-new ones. 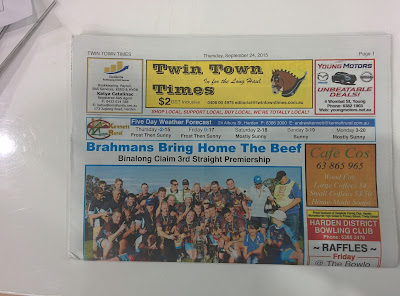 A sports team called the Binalong Brahmans seems to have won a championship. What a name, and what a headline!
Posted by prasadgc at 20:30 No comments: