Obama's "Gaffes" - The Truth and Nothing But the Truth

Conventional wisdom holds that Obama made two major gaffes during his long presidential campaign. The first was during the Democratic primaries when he remarked at a private dinner that many poor whites in Pennsylvania were bitter and clung to guns and religion. Hillary Clinton pounced on him for that bit of political incorrectness and attempted to squeeze every bit of mileage she could from it (not very much, as it turned out). Then, towards the end of the campaign, there was his comment to Joe the Plumber that "spreading the wealth around" was a desirable thing in the current circumstances, a comment that was promptly seized upon by the Republicans to proclaim Obama a socialist.

Now that the election is safely over, and far from the heat and dust of US politics, I have to wonder what Obama said that was so wrong.

Do uneducated poor whites in the Appalachian region bitterly cling to guns and religion? Sweet Jesus, that's God's own truth, so shoot me.

And wouldn't spreading the wealth around just be the opposite of George Bush's policy of concentrating wealth in the hands of a few? That hasn't exactly been the best policy as current events have shown, so why the fuss?

I think it would be far better to suffix the word "socialist" every time it's used with the Seinfeldian phrase, "not that there's anything wrong with that."

(My idea of Utopia isn't socialism (not that there's anything wrong with that) and neither is it laissez-faire capitalism, but if we cannot have competitive markets to spread the wealth around in a capitalistically acceptable way, then perhaps a little fiscal spreading through progressive taxation is the way to go.)

After the election, Obama made another "gaffe". He said he wouldn't hold séances to contact dead presidents like Nancy Reagan did. That was untrue only in a literal sense. In spirit (pun intended), it was a fair comment since Nancy Reagan was known to consult astrologers.

All in all, I think I like Obama's gaffes better than his trite statements. They have the clear ring of truth. Keep them coming, Mr. President!

Posted by prasadgc at 03:49 No comments:

The Smartest US President

Barack Obama's impressive résumé and obvious intelligence have the world in raptures, but there was at least one President before him who could give him a run for his money in the intellectual department.
That President was Thomas Jefferson, horticulturist, statesman, architect, archaeologist, paleontologist, author, inventor, and founder of the University of Virginia (source: Wikipedia). Rather than reference the tons of material written by and about Jefferson, I will only quote one example of his many prescient words:

I believe that banking institutions are more dangerous to our liberties than standing armies. If the American people ever allow private banks to control the issue of their currency, first by inflation, then by deflation, the banks and corporations that will grow up around the banks will deprive the people of all their property until their children wake up homeless on the continent their fathers conquered.

Beat that, Barack Obama. Jefferson predicted the current mess in 1802. (And yes, the Fed is a private organisation, not owned or controlled by the US government.)
No wonder Kennedy said when welcoming a group of 49 Nobel laureates to the White House that it was "the most extraordinary collection of talent and human knowledge that has ever been gathered together at the White House - with the possible exception of when Thomas Jefferson dined alone."
Posted by prasadgc at 21:30 1 comment:

Change has indeed come to America. And what momentous change!

Take your eyes off Barack Obama for a minute to see the greater wonder. Michelle Obama enters the White House as First Lady of the country that enslaved her ancestors. Now that is poetic. None of Barack's ancestors was ever a slave. It is in Michelle Obama that I see the wheel of history come full circle.

Still, the world has reached but one milestone. We rejoice that a black (or as my pedantic mind would interject, "half-black, half-white") person has won the recognition he deserves for his talent and potential without regard to his race. That is a triumph of American meritocracy. The next milestone for our collective civilisation will be when such an achievement does not evoke comment.

Personally, my opinion of the US has now soared. Having always looked at the US from outside, I would say it was US foreign policy that has had the greatest influence on my opinion. Specifically, as an Indian growing up in India during the seventies and eighties, resentment was my uppermost feeling whenever I thought of the US. US foreign policy never practised what it preached. It preached democracy and human rights. Yet when asked to choose between democratic India and authoritarian Pakistan, the US always came down on the side of Pakistan. Repeated evidence of Pakistan's sponsorship of terrorism in Kashmir and elsewhere in India was ignored by successive American administrations. In particular, Nixon's shameful partisanship during the 1971 Bangladesh war will remain forever in my mind, and I could not help but feel glee at his subsequent ignominous departure from public life. If I was religious, I would call it karma.

It has only been in recent times (i.e., during the Clinton adminstration) that India has received more favourable treatment compared to its troublesome neighbour. And that's not so much because the US finally saw the error of its ways but because India became economically so much more important. Barack Obama too understands where the threat to peace comes from today. He is the highest-profile American to have talked about possible military action against Pakistan to root out terrorism. One more example of his clear thinking if one was needed. At last, an American President who sees what only Indians could see so far.

Regional politics aside, Obama's election now robs every dictatorship around the world of its last remaining excuses. I remember eighties-era Soviet propaganda and its boast - that it was easier for the descendent of a Russian serf to achieve high office in the USSR than it was for the descendent of an African slave to become a governor or the President of the US. Now, a truly liberal American populace has shown the lie to that sort of thinking. As recently as a couple of months ago, people around the world were muttering that American racism was alive and well, that American voters would never "allow" a black person to become President.

America retorted: Yes, we can. Just watch us.

And the world watched, mouth agape.

I have always resented it when Americans referred to their country as "the greatest nation on Earth." Today, I'll swallow that resentment and grant them the right to say that. As Obama said in his victory speech in Chicago, "the true strength of our nation comes not from the might of our arms or the scale of our wealth, but from the enduring power of our ideals: democracy, liberty, opportunity, and unyielding hope."

Meritocracy matters. At least two generations of talented Indians have left India's shores for the US. "Opportunity" is the word most often used to explain their decision to migrate, but what provides opportunity is the undiscriminating meritocracy of American society. You perform, you are rewarded. No wonder Indians are known as the most successful ethnic minority in the US. The entrepreneurial Indian provides the seed, and the meritocratic American environment provides the fertile soil for that seed to become the biggest tree it possibly can. Reportedly, 40% of Silicon Valley's startups have Indian owners. So many Indian names feature in the senior executive level of the American corporate world and in the faculty lists of the Ivy League. In contrast, India's own soil has been sadly barren for several decades, and native seeds could never grow into such tall trees in that soil.

The challenge that Barack Obama's election poses to India is different from the challenge that it poses to many other countries. India is already a democracy with an equally impressive record of righting historical wrongs and empowering its historically disadvantaged minorities. Next year's Indian elections may see the elevation of a Dalit ("untouchable") woman to the highest office in the land. That will be doubly impressive for a society that has historically been both patriarchal and caste-ridden. No, the challenge for India from Obama's election is to develop as an equally visible meritocracy. Can India provide opportunity to all, regardless of personal background? Affirmative action is hugely effective in India in churning and inverting the social pyramid, but it is also hugely controversial and creates its own pockets of unfairness. There is also entrenched unfairness and bigotry in the Indian populace at large of the kind that Americans were so recently accused of. As an example, the leader of the party that formed the current Indian government was effectively denied the Prime Ministership in spite of her Indian citizenship because she was born Italian. Even educated Indians wrote emphatic comments on blogs swearing that they would never accept her as PM. Welcome to racism, Indian-style. India needs to answer the American challenge - Can a white person become prime minister of India? Because meritocracy counts, and change starts at the top (or at the bottom, if you're talking about the mind of an individual).

We will definitely see this election reverberate throughout the world. Obama's greatest handicap now is the weight of expectations that he carries. No one expects that he will sell out US interests in a naive internationalist spirit. He will first and foremost safeguard US interests. If he can see (in a way that past US administrations could not) that US interests are best served by supporting a network of true democracies around the world rather than by propping up acquiescent dictators, he would have achieved a win-win situation for all of us.

I also cynically hope he will renege on his protectionist election promises. Protectionism always harms those it is meant to protect, so I'm hoping he will prove to be as pragmatic (on trade) as he was when he rejected campaign financing after initially pledging support for it.

Posted by prasadgc at 01:36 No comments:

Apparently, this ad saying "Let the issues be the issue" is running in Manhattan on the eve of the US election. It dramatically shows a white Barack Obama and an African-American John McCain. It's a great idea, just imagining how race could be factored out of the election so that voters could concentrate on the really important issues. 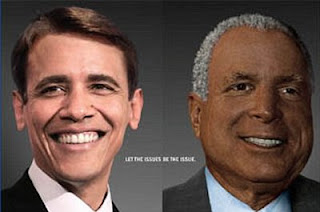 Why didn't they do this earlier, and why only in Manhattan?

Posted by prasadgc at 04:49 No comments:

I read everywhere about John McCain being "a man of honor", with no one challenging his bravery or his principles, only his policies and choice of VP (if at all). I wonder why this detailed piece on McCain titled "Make-Believe Maverick" by Tim Dickinson hasn't been more widely known. The article was originally published on Rolling Stone.

It's either a brilliant exposé or a smear, and I'm not in a position to say which it is, but it's worth a read anyway. It's also profoundly disturbing.

I've always favoured Obama as US President, and this article has only reinforced my feeling.

Posted by prasadgc at 05:38 No comments: