The Ugly Logic Behind Agni - Necessity, not Luxury

I'm reading a lot of sanctimonious comments on news sites by Westerners (and Indian leftists) asking why a poor country like India is wasting scarce development resources on building nuclear missiles.

An understandable sentiment, but the Indian missile program is not being dictated by megalomania.

I put together this image to explain the logic that forces India's hand. 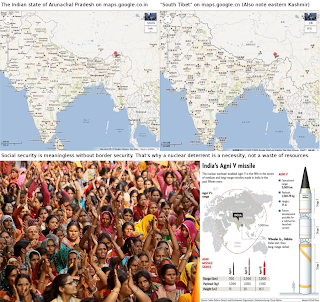 It would of course be ideal if the world was free of nuclear weapons, but when neighbours claim your territory and have fought wars over it in the past, there is an ugly logic that dictates your choices. It means the poor will have to wait another day.
Posted by prasadgc at 07:16 No comments:

I saw "The Best Exotic Marigold Hotel" (TBEMH) today at Castle Hill Megaplex and quite liked it.

There are lots of reviews on the web that will give you the basic plot and a sketch of the main characters, so I won't repeat all that here. I'll talk about some overall impressions and general thoughts.

Having a foot in both worlds (India and the West), I think the film has dealt very sympathetically with the theme of people struggling to adapt to a changing world. Sometimes the audience is meant to empathise (as with the recent widow dealing with an unfeeling, robotic call centre operator) and sometimes meant to look on in vengeful glee (as with the racist patient who insists on being seen only by an "English" (i.e., Caucasian) doctor and doesn't seem to find a single one in modern Britain). The storyline isn't always believable, but even the cliches and the semi-predictable twists have their purpose, to illustrate some idea or the other. As long as we take them in that spirit, we can tolerate the lack of realism.

No Western reviewer is likely to pick up on the following, so I should do so.

There was an Australian movie a couple of years ago ("The Waiting City") that dealt with a related theme, that of an Australian couple with unresolved relationship issues who travel to Kolkata (Calcutta) to adopt a child. That was nice too, although a bit sad.

All in all, TBEMH wasn't bad as a movie, but I suspect the idea (of elderly and financially hard-up Brits spending their retirement in India) wouldn't really work. India is a hard country to live in, and one needs money, contacts and sharp elbows to survive. For people triply softened by age, vulnerable finances and little prior exposure to chaotic systems, I believe it would be very hard. Heck, I doubt if *I* could survive there anymore. The makers of the movie have been very politically correct, I must say.
Posted by prasadgc at 07:54 No comments:

So Pakistani President Zardari has come and gone. A state visit thinly disguised as a private one, this is one that has raised the usual cautious optimism.

It has also prompted the weary cynicism that comes from repeated disappointment. As that cynical blogger has pointed out,

- Zardari cannot rein in his army and the ISI;
- He cannot call back the jihadists unleashed upon this country (India) by his predecessors and the army;
- He cannot stop or hand over Hafiz Muhammad Saeed and other terrorists operating with impunity from Pakistani soil; and [so]
- [...] he cannot deliver on his promise of living peacefully with India.

He's superficially right. However, I think this time is fundamentally different.

I don't believe Zardari is going to bring about a change in the Pakistani mindset towards India. If anything, it's the other way around. I think the Pakistani mindset has already been altered by harsh circumstance in recent months, which is why Zardari has been sent to India with an olive branch. The presidential visit is in fact the second straw in the wind that indicates a welcome Pakistani realism. The first was the decision by Pakistan to liberalise trade with India and move towards reciprocity by granting Most Favoured Nation status to India by the end of 2012. They need the economic lifeline that an open trade border with India will give them - cheaper imports and a large market for exports.

After the collapse of the Soviet Union, I have become extremely conscious of the role economics has to play in the destiny of nations. Once you're bankrupt, your options are pretty much limited to surrender and implosion. Pakistan is bankrupt, make no mistake about it. The 65-year war with India is over, and Pakistan has lost. What we're seeing is the surrender dance.

India needs to play its cards right to ensure that Pakistan has a "soft landing", so to speak. In hostility, Pakistanis have enjoyed the illusion of parity with India. In peace, they cannot escape the reality that India is an order of magnitude bigger on any scale. They will not take it well. Some elements may adopt a "death-before-dishonour" approach to derail the process of surrender (for that is what this is), and trigger one last, violent engagement that may even go nuclear. While the process overall is going India's way, that is the one aspect to watch out for that could spoil the party.

In business, acquisitions are often termed "mergers" to assuage egos in the corporation being taken over. India must adopt a similar stance in its PR and take care not to display triumphalism at the recent turn of events. Thankfully, we may not need to worry on that score. The mild, modest and totally self-effacing Manmohan Singh is probably the best person to shepherd the two countries into their new and extremely unequal relationship.

If the trend continues without disturbance, culminating in the collapse of the only counterweight to India in South Asia, we will be seeing a dramatically altered power structure in Asia. India will have the luxury of playing off the core powers (China, Russia and Iran) against the peripheral powers (the West) to its own advantage. Has the Indian foreign policy establishment gamed this scenario, and are they prepared to exploit it? The future is here now.
Posted by prasadgc at 02:07 No comments:

By now, many of you would have read the article "I'm Christian, Unless You're Gay" that's doing the rounds of the Internet. You may even have read some of the responses to it.

I'm neither Christian nor gay, and my own journey towards forming a sympathetic view of homosexuality may hold learnings for other people, so let me post about it here. I guess my upbringing in India has been indirectly influenced by the prudery of centuries of foreign rule. Certainly the Kama Sutra and the stone carvings at the temples of Khajuraho and Konarak show that Hindu civilisation was not in itself prudish. But four centuries of Muslim rule and two centuries of rule by a largely Victorian Britain changed the character of Indian middle class society. I could hardly talk to my parents about sex when I was growing up, much less about homosexuality. It would have embarrassed all of us.


My personal life is boringly conservative (and I like it that way) but my views are shockingly liberal :-).

Well, however liberal I became in my attitudes towards sex in general, on the topic of homosexuality, I still retained a knee-jerk response until fairly recently. It may be fair to say that I was personally repulsed by the idea. And my education in a scientific discipline like engineering made me question whether homosexuality was even natural! After all, gays couldn't reproduce, so that "proved" to me that homosexuality was an aberration from what was natural. I believed it was a disease or a mental condition that needed to be cured. However, I should point out that I never at any time thought of it as 'evil'. I just considered it unnatural, not a crime or a sin. No one was being harmed, after all. I believed homosexuality was no more a crime than (voluntary) prostitution and needed to be decriminalised.

My last reservations about the 'naturalness' of homosexuality fell away rather dramatically, and it happened not on a personal or emotional level, but at an intellectual level, since that was the level on which my position was based.

I read somewhere (I can't remember the source now, but here's a similar one) that between 7% and 10% of the individuals in any mammalian species are homosexual. All of a sudden, what had seemed unnatural to me became natural, and I realised I had no reason to consider gays abnormal anymore. Ever since I read Desmond Morris's book The Naked Ape, I had learnt to think of man as just another animal. [In fact, as an amusing exercise, I would look at people and try to see them as primates. I could see people as monkeys, with their eyes, ears, facial hair and even their expressions and mannerisms appearing very simian.] So suddenly, I realised I had no reason to consider human gays abnormal in any respect, because their existence was entirely consistent with the existence of gays in every other mammalian species. There was nothing to be "cured", after all. My liberal-humanist philosophy took over at that point, and that is how I became a supporter of gay rights.

It also helps that I am strongly anti-organised religion. So when I read about the Westboro Baptist Church and their slogans like "God hates fags", I know who the bad guys are.

This is an honest, warts-and-all account of my personal journey. Parts of the narrative may not appeal to all, but it's the truth. I guess a description of my position today could be "I'm humanist, unless you're religious". Just kidding ;-).
Posted by prasadgc at 14:13 No comments: