It's with sadness that I read of the passing of former Philippine president Corazon Aquino. 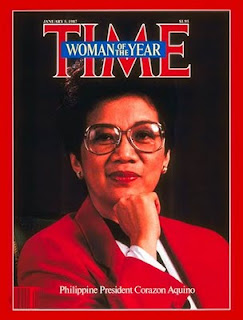 It was 1986. I was a student at management school in faraway India when she became President of the Philippines after an epic struggle against a dictatorship. I shared the revulsion of many around the world at the cowardly way in which Philippines dictator Ferdinand Marcos (allegedly) ordered her husband Benigno Aquino to be murdered just as he stepped off the plane on his return to the Philippines to challenge the dictatorship. Like so many others, I watched and cheered as Corazon bravely took up her husband's mantle even though she had no political experience at all. She became the focal point of the revolt that represented the people's intense frustration with Marcos's tyranny and misrule. If she had failed to step up at the right time, the movement may well have fizzled out. Step up she did, and it must have taken enormous courage to do so.

In those days, there was no World-Wide Web to follow events in real-time. Time and Newsweek were my two main sources of information, and I devoured them voraciously. Now, when I read reviews of her life, the old familiar names come rushing back - Juan Ponce Enrile (Marcos's defence minister who precipitated the revolt by being the first to break ranks with him), General Fidel Ramos (who lent crucial support to Aquino), Cardinal Jaime Sin (the head of the Roman Catholic church in the Philippines who called on the people to support the uprising against Marcos), Gregorio "Gringo" Honasan (a weird serial mutineer who led coup attempts against Marcos, Aquino and reportedly now against Arroyo), etc.

I think Corazon Aquino faced more than her share of challenges during her term, with both natural disasters and man-made ones confronting her on a regular basis. (She faced down 7 coup attempts in 6 years!) She could not solve all the problems of the Philippines, but I believe she made the greatest contribution of all - not just in deposing a dictator but in systematically dismantling the institutions of that dictatorship in order to make the country safe from a similar dictator in future. In the process, she became a powerful symbol of democracy and "People Power" throughout the world.

At a human level, she symbolises something equally important. From whatever I read, I gather that she never lost her egalitarian touch and did not let power corrupt her. Till the end, she remained modest and unassuming.

Such leaders are very rare. I mourn her passing.

[Update 04/08/2009: It was touching to see that two of former dictator Ferdinand Marcos's children came to pay their respects at Corazon Aquino's funeral. Life's too short for familial blood-feuds.]
Posted by prasadgc at 18:03 No comments: