It seems that only the sudden elevation of Julia Gillard as Australia's first female Prime Minister has caught the world's eye, but a quiet revolution has been underway for a while. 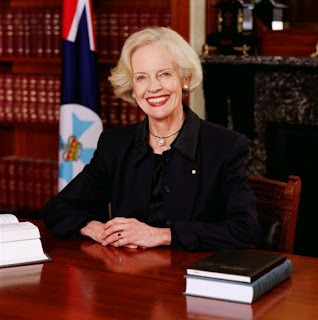 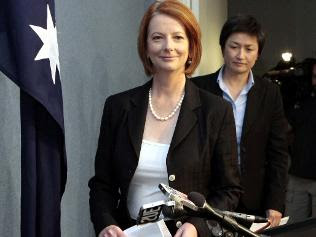 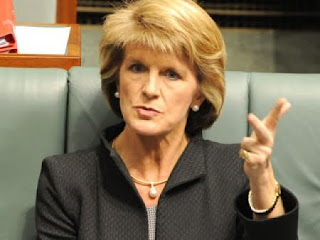 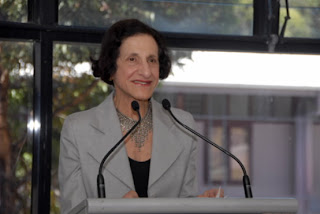 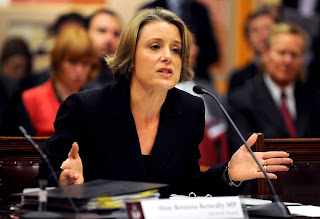 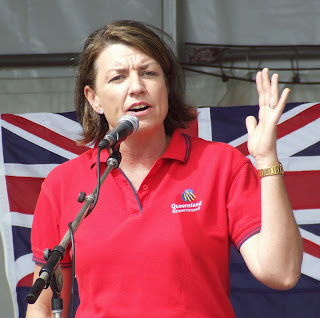 Queensland Premier Anna Bligh
And that's just the political sphere. There are scores of women in the federal and state parliaments, including some ministers. This is just the set of those who have risen to a position of unquestioned eminence.

Business has been less progressive, but here too, the bastions have begun to fall. 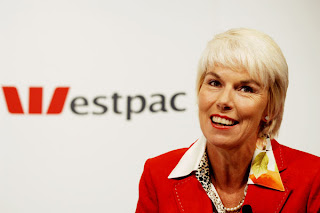 Gail Kelly, CEO of Australia's largest bank (Westpac)
A quiet social revolution has been taking place in Australia, and while the country can obviously lay legitimate claim to the label of an equal-opportunity society (don't let the focus on gender distract you from the ethnicity of Marie Bashir and Penny Wong above), a recent article titled The Invisible Men uncovers a new and possibly disturbing side to modern Australian gender relations.

Watch this space. This is no decadent society. This is social ferment at its best.

It must have been the most unkindest cut of all to have one's hitherto loyal deputy turn so savagely against them.

Today's coup had all the hallmarks of that classic Shakespearean tragedy.

The out-of-touch autocrat, the shadowy conspirators, the honourable front-person recruited to the cause, the treacherous assassination, and so on right down to the "Not that I loved Kevin less" speech.

[...] It’s these beliefs that have been my compass during the three and half years of the most loyal service I could offer to my colleague, Kevin Rudd. I asked my colleagues to make a leadership change. A change because I believed that a good Government was losing its way. [...] I love this country and I was not going to sit idly by and watch an incoming Opposition cut education, cut health and smash rights at work.

She may as well have said her former boss was "as dear to me as are the ruddy drops that visit my sad heart" (Act II, Scene I). One has to appreciate the genius of the bard...

And in the other unremarked tragedy (for Australia at least), Lindsay Tanner, perhaps the most competent minister in the Rudd cabinet, has resigned. Of course it was all for "family reasons", but it seems a bit of a coincidence that Tanner (along with Anthony Albanese - Marc Anthony?) was one of the very few people to support Rudd in the face of the backstabbery hatched by these fine public figures.

I voted for the Labor party in 2007 believing that Kevin Rudd would be PM for the full term of the government. Now some people I don't know have replaced him with someone else for reasons I don't understand, and I haven't been consulted. This voter is angry (and is not alone by the looks of it). If it had been Peter Costello heading the Liberals instead of that clown Abbott, I would have switched loyalties in a heartbeat. [Who knows, it could now very well be the turn of the Liberals' backroom boys to develop cold feet and do a Caesar on Abbot.]

I used to like Julia Gillard and wanted her to be PM someday. Now I'm not so sure. It's hard to like someone who's holding a bloodstained knife.

Even if they are honourable. 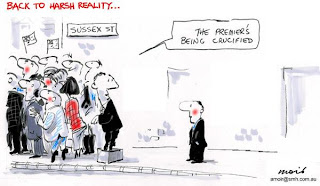 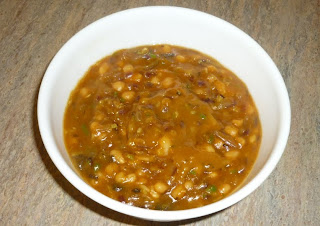 Mushroom-Baked Beans Curry
Whenever the opportunity to commandeer the kitchen presents itself, I put together as many ingredients that are exclusive to my taste as possible, so I can turn out fewer unpopular dishes, if that makes sense. For example, I'm alone in my household when it comes to liking mushrooms and baked beans, so it wasn't going to be long before a combo of this sort made its appearance.

1 tin of mushrooms in "butter sauce" (Butter sauce? Some kind of maize starch, as it turns out)
1 tin of baked beans in tomato sauce
1 spanish onion
2 cloves of garlic
1 chilli (Jalapeno peppers are my favourite)
2 tablespoons of grapeseed oil
1 pinch of turmeric powder

This is a dish that can't make up its mind whether to be sweet or salty, so you'll have to make its mind up for it. Add salt or ketchup as per your fancy. I chose salt because that was my mood for the day.

Posted by prasadgc at 02:35 No comments:

As If The Big Four Were Not Enough

It almost makes me laugh in the midst of my rage.

Here I am, arguing that Australia needs a Ten Pillar Policy to bring back competition to the banking sector, and here are banking officials lobbying politicians to accept further mergers. And there are ministers who were "open to the idea". I want to know who these representatives of the people are so we can vote them out.

The arguments take my breath away.

One of the themes pushed was that a merged ANZ and NAB would promise to slash fees and charges across the board.

Yes, I totally reject the lessons of economics and therefore trust the big banks to cut fees and charges as they gain more negotiating power. Like they did during the financial crisis. (Another link here.)

The move, it was argued, would prompt CBA and Westpac to follow suit and deliver customers a major benefit.

A major benefit! Yes, why not have all four banks merge into one massive monopoly that can deliver a major benefit to customers right on their backside? They will be forever grateful.

I guess we dodged a bullet here, but we're all to blame for creating a tolerant climate where such ideas can be entertained. Corporates and politicians must learn that consumers are voters, and that they jealously guard their interests. But I don't see much hope that we can force a Ten Pillar Policy on the government with the citizenry sleeping so soundly.

Posted by prasadgc at 22:09 No comments: