If someone ever did a per-capita Olympic medal calculation, India would be at the bottom of the heap.  [Update 01/08/2012: There is one, and India is at the bottom of the heap.] In some ways, that's a no-win situation. Winning medals at international events takes serious investment, and only rich countries (or communist countries who make it a matter of pride) can afford to spend that kind of money. So either India gets ridiculed for not winning medals, or it gets criticised for wasting money on sports when there are "so many starving millions", as the critics will be quick to scream.

Fair enough, but Indians can at least maintain a sense of humour, can't they?

At the opening ceremony of the London Olympics, a young Indian woman in a red top and blue trousers joined the athletes and marched at the head of the Indian delegation. 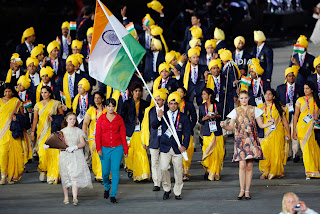 Indian officialdom reacted in the way it knows best.

The head of the Indian delegation, P K M Raja, said the woman had "embarrassed us in front of the world". (There are far more embarrassing things about India, Mr. Raja. Where do we start? Corruption? The complete non-governance of the government? The loser mentality?)


Calling the incident "bizarre", he said the Indian team would be demanding an apology. (From whom? Nobody owes you any apology. Stop taking yourselves so bloody seriously and learn to laugh at the ridiculous.)


"The Indian contingent was shown for just 10 seconds and to think this lady hogged all the limelight," said Mr Raja. ("Boo hoo! Because these 10 seconds are the only chance our athletes have of being in the limelight.")


Me, I had a hearty laugh. Indians have arrived at last, I thought. We can play practical jokes with the best of them. Here are two of my personal heroes of the art of gatecrashing: 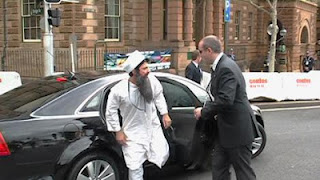 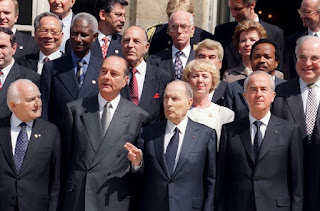 Claude Khazizian (with the red handkerchief), a distinguished-looking betting shop employee, who loved to bluff his way past security and pose with heads of state


Do these people not deserve our applause and adulation? Breathes there a man with soul so dead, who never to himself hath said, "This is a joke, a hilarious riot"?

Fortunately, the disgracefully humourless behaviour of the Indian official was somewhat mitigated by that bulwark of sanity, the cartoonist. This is a sample. 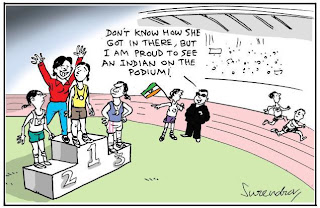 
Thanks to that cartoon, India, you've barely managed to win the Bronze for humour. We expect better the next time.
Posted by prasadgc at 05:56 5 comments:

They hae slain the Earl O'Moray
And Lady Mondegreen.

What the poem actually says:

They hae slain the Earl O'Moray
And laid him on the green.

I had my own Lady Mondegreen moment over the weekend when I was listening to an old childhood favourite, the Carpenters song "Only Yesterday".

You showed me the way to leave the past
And all its tears behind me.

I then realised I had spent my entire life until last weekend thinking it was:

You showed me the way to leave the past
And now it steals behind me.

How creepy to have your past steal behind you just when you thought you had left it!

Posted by prasadgc at 19:58 No comments:

The Greatest Indian Since Gandhi

CNN-IBN have recently run an opinion poll to select "The Greatest Indian After Mahatma Gandhi".

I voted in that poll myself, and my choice was Dr BR Ambedkar.

While Gandhi was obviously not one of the candidates, I'm not sure I would have rated him the highest even if he had been. Many of Gandhi's ideas were good, his principles were admirable, and the independence of India a spectacular achievement, but greatness is subjective, and the perception of the relative greatness of people varies with the passage of time. Gandhi today is not the colossus he once was. Many of us today see him as a good human being with his share of flaws.

I can't vote for Sardar Patel, not now anyway. I used to admire him until the BJP and allied parties adopted him as some sort of right-wing hero. I don't know if Patel himself subscribed to the ideology of the Hindutva movement, but their support of him makes him tainted goods, in my opinion. That's unfortunate.

I guess I could have voted for Nehru. Nehru's commitment to both secularism and socialism have come under fire (but not from me!) Nehru did some amazing things to make India what it is today (just think about the directions in which his peers Nkrumah, Tito, Nasser and Sukarno took their countries). His pro-technology, agnostic world-view also mirrors mine.

Ultimately, I decided on Ambedkar because we of the non-Dalit elite have simply not understood what life as a Dalit must have been like, and it is time we acknowledged this. India will be great only when the evil of caste is wiped out from its society, and Ambedkar symbolises the fact that a Dalit is no lower than anyone else, and can be as great as the greatest of them. The odds that Dr Ambedkar had to surmount to become a lawyer (studying at Columbia and the LSE, no less) and ultimately lead the team that drafted the Indian constitution, probably match the long and difficult journey of Barack Obama from a single-parent home to the White House. When reading his biography, I'm happy to read that he did receive encouragement from people of nominally "higher" castes, such as his Brahmin teacher. This parallels the support Dr Abdul Kalam received in his childhood from a few Brahmins, even though society as a whole segregated Brahmins from non-Brahmins, especially Muslims. (These examples show that even in the worst of times, there is hope for India because humanity never completely deserts its people.)

The famous historian Ramachandra Guha (author of the seminal tome "India After Gandhi") has written a brilliant article on the poll, concluding that "This anointing of the Singular and Unique goes against the plural ethos of a democratic Republic" and that "one might choose hundred great Indians, or fifty, or ten, or even, as I have ended by doing here, three. But not just One."

Dr Ramachandra Guha's points are very well-argued, and I cannot do justice to his piece by summarising it here. It deserves to be read in full.

He contrasts the popular vote in this contest against the vote of a panel of experts, and criticises the aam aadmi's (the common man's) vote on two counts - one of ignoring Kamaladevi Chattopadhyaya and the other of elevating Dr APJ Abdul Kalam. He says the aam aadmi, in contrast to the expert panel, has got it "spectacularly wrong" on both these counts. I am ashamed to admit I had never even heard of Kamaladevi Chattopadhyaya until I read his piece, so on behalf of the aam aadmi, I am happy to accept Dr Guha's rebuke.

I must, however, raise a point in favour of the aam aadmi's choice of Dr. APJ Abdul Kalam as the greatest Indian since Gandhi. It's not just that Dr Kalam is a decent and good man or "The Good Muslim" as he put it. It's that Dr Kalam as President has allowed Indians to feel better about their country as a State. Corrupt and cynical politicians have besmirched this country's reputation. The common man is ashamed of the Indian state. The greatest contribution of Dr Kalam's has been to make the highest office in the land an outpost of decency, if only for 5 years. Dr Guha has sadly ignored the symbolic power of cleansing that Dr Kalam's single term as President has had on the Indian psyche. We have been uplifted by those 5 years. Even the most cynical Indian would not call Dr Kalam a "rubber stamp", the derogatory epithet we apply to all other Presidents. Think about this, Dr Guha. The aam aadmi is not "spectacularly wrong".

I should quote Gerald W Johnson from his book "Communism - A Study of Revolution":

Although any one man you may point out may be a foolish fellow, all the people, taken together, have a political wisdom that in the long run is superior to that of any one man.


That's how I would rest my case. While my personal choice remains Dr. Ambedkar, the people have spoken, and the Greatest Indian since Gandhi is therefore Dr APJ Abdul Kalam.
Posted by prasadgc at 21:19 1 comment: