If you want to know what a mining industry "fat cat" looks like, look no further. 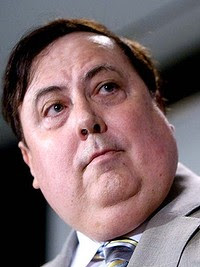 That's Clive Palmer, director and owner of Mineralogy Pty Ltd. and worth a few billion.

Like most mining industry fat cats, Palmer is naturally unhappy with the Australian government's proposed new resources tax. The industry has hit out with a series of ads purporting to show that the new tax will hurt Australia by scaring away foreign investment. And now that the government is striking back with ads of its own, Palmer has attacked the "wasteful use of taxpayer's money".

Hang on a minute! Isn't the mining industry wasting shareholders' money by running its ads? Oh, but that's to shore up shareholders' profits, which will surely be hit if the companies sit by and do nothing.

Why can't the same rule apply to the government, then? The government is merely running ads to shore up its future tax revenue, which will surely be hit if it does nothing to counter the industry's lobbying.

The industry lobby's scare campaign says Australia will lose out on investment with this tax, because investors will take their dollars to more favourable tax regimes. But with reports that other countries are planning to emulate Australia's example, where will those investment dollars go? Still scared? Ooga-booga!

I'm with the government on this one. I own shares in resources companies, but I'm not about to be fooled by the industry's arguments. We need to build back the budget surplus and the resources boom is the best vehicle to do that. The government missed the chance to make some money off the last resources boom. They shouldn't let the next one slip. These companies pay less tax in Australia than in other countries. More importantly, they pay tax at a lower rate than I do. Let them pull their weight, say I. They're not about to go anywhere else. After a bit of bluster, they'll stay on and pay the tax.

I've contributed to GetUp!'s campaign to counter the industry's spin, and I'll be letting the government and my MP know where I stand. Nobody holds a gun to my head. Certainly not a fat cat.

Posted by prasadgc at 07:31 No comments: