During the American War of Independence, a man by the name of Benedict Arnold fought on the side of the fledgeling United States. Arnold won some key battles against British forces, and was injured in the foot at the Battle of Quebec. He was promoted to the rank of Major-General in recognition of his many contributions.

Later on, however, as a result of perceived slights at the hands of his superiors, Arnold turned traitor and attempted to hand over his command of West Point to the British. He failed in that attempt, but escaped to British lines and fought against his former compatriots thereafter.

How does the US remember Benedict Arnold today? How does an often comically over-patriotic nation handle the memory of a man who was both patriot and traitor?

There is no statue erected in honour of Benedict Arnold. Arnold is remembered in the US today by the Boot Memorial. 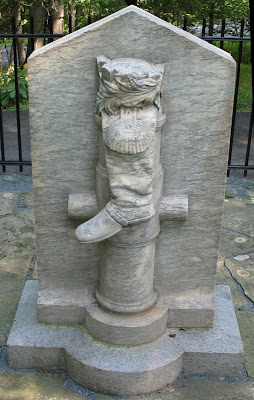 The Boot Memorial honours the injury that Arnold suffered in the cause of American Independence, but does not mention him by name because he turned traitor later.

In India today, the legacy of a man called Vinayak Damodar Savarkar, is being fiercely debated.

VD Savarkar fought for Indian Independence against the British. Unlike Gandhi and the Indian National Congress, he did not choose the path of non-violent, passive resistance and non-cooperation. He believed in violent revolution, so when he was captured by the British in connection with a suspected conspiracy, he received a severe sentence. He was sentenced to 50 years in prison in the infamously harsh Andaman islands in the Indian Ocean.

While in the Andamans, Savarkar wrote numerous mercy petitions to the British, and was finally released after serving just 10 years of his 50 year sentence.

After his return to the Indian mainland as a free man, Savarkar was as good as his word and never again worked against the British. What he did do was work against the Indian National Congress, which suited the British very well indeed.

Gandhi and the Congress aimed to secure Hindu-Muslim unity, and to work towards Indian independence from the British as a undivided political entity. Savarkar, on the other hand, worked to unify the "Hindu nation" against the Muslims, and eventually became the President of the right-wing Hindu Mahasabha. In this, he effectively took the same side as Jinnah, who also believed in the "Two-Nation Theory" that Hindus and Muslims were separate "nations" and could not share a single state. The actions of Jinnah and Savarkar thus deepened the divide between Hindus and Muslims. Indeed, Jinnah's Muslim League and Savarkar's Hindu Mahasabha became unlikely coalition partners in many provincial governments when the Congress resigned from those governments to protest certain actions of the British.

Savarkar's writings acquired a distinctly fascist tone, and he became more interested in the "independence of the Hindu nation" from Muslims and Christians than with the independence of India from British rule. He turned from being a revolutionary into a collaborator. His being a collaborator is clear from  the fact that he got into no more trouble with the British authorities. The trouble he was giving to the Congress played right into the hands of the British.

How must India remember Savarkar today? The Hindu right-wing insists on calling him "Veer" (brave) Savarkar, but there is little that smacks of bravery in the grovelling letters he wrote to the British during his incarceration in the Andamans. India certainly needs to acknowledge his early contributions to the freedom struggle which earned him his prison sentence, but this acknowledgement must be tempered by the knowledge of his subsequent betrayal of that freedom struggle and his actions that favoured the British.

India needs to erect a monument in honour of Savarkar's early contributions, but this monument should not acknowledge him by name on account of his later actions as a collaborator. Only word of mouth should associate him with the monument, just like Benedict Arnold is only unofficially associated with the Boot Memorial.
Posted by prasadgc at 20:01 No comments: