The case of journalist-turned-government minister MJ Akbar in India got me thinking about the probability of guilt when a man is independently accused of sexual harassment by a number of different women. At last count, 16 different women have come forward as part of the #MeToo wave sweeping India, to accuse Akbar of various kinds of sexual misconduct.

At the time of writing, Akbar has chosen to brazen it out by filing a criminal defamation suit against the first woman who made her accusation public.

This case has since become a cause célèbre in India, with commentators taking various positions on it.

I personally believe that the weight of credibility is on the side of Akbar's accusers, but I was wondering whether there was a way to approach such a situation more objectively, even quantitatively. After all, each individual accusation could be dismissed as a case of "He said, she said", but put together, the accusations build up a more compelling argument.

Let's start with the simplest case. A man is accused of misbehaviour by a woman. He denies it. Neither of them has any evidence, or any witness, to back up their claim. Prima facie, both of them seem equally credible. What should an objective observer think?

Now, this obviously contradicts the legal principle that an accused person is 100% innocent until proven guilty, but this is not a court of law, where evidence is required beyond the shadow of a doubt before an accused can be convicted of a crime. This is a thought experiment. We are trying to compute what we can adopt as a working hypothesis, based on the balance of probabilities.

In graphical terms, this is what the picture looks like when a man is accused by just one woman:

Now let's make this more interesting. Let's say a second woman steps forward to make a similar accusation, based on an independent incident. And let's say he denies this accusation too.

Does our view of the man's guilt change? Do we still think it's just his word against his accusers', and therefore that he's no more guilty than we thought before? Or do we start to doubt him a little more now? If so, by how much?

My model is that each subsequent accusation halves the probability of his innocence. And so, this is what the picture should look like:

It's important to note that we are not treating the three claims as completely independent, and assigning a 33.33% probability to each. That's because the claims of the two women, while independent, nevertheless reinforce each other. The accusation of the second woman halves the probability of innocence that we granted him after the first accusation. So we assign a probability of only 25% to his innocence now, not 33.33%.

What happens when a third woman steps forward? It's easy to follow the logic now:

With three independent accusers, the man's probability of innocence reduces to 12.5%, notwithstanding his protestations.

Stated in mathematical terms, the probability of a man's guilt when independently accused by 'N' women is given by

Let's apply this model of guilt to the MJ Akbar case. The number of his accusers now stands at 16:


What's the probability that Akbar is guilty?

Update 17/10/2018: MJ Akbar has resigned as Minister of State for External Affairs, after 20 women expressed their desire to testify in court against him. Three of them were from the original list (Tushita Patel, Kanika Gahlaut and Suparna Sharma), but the other 17 were all new, bringing the total number of his accusers to 33.

Posted by prasadgc at 08:03 No comments:

I've been enjoying watching Sabrina The Teenage Witch, and as I near the end of Season 3, I'm struck by some remarkable parallels with another serial I saw not too long ago - Buffy The Vampire Slayer. 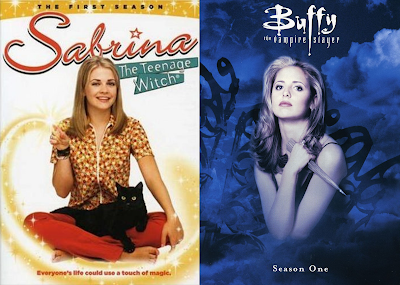 Two shows with an intended audience of teenage girls have been strangely fascinating to a middle-aged man...

Both feature spunky teenage girls with powers out of the ordinary, and the serials show them dealing simultaneously with challenges from two worlds, the human and the supernatural. High school can be a fairly big deal by itself to a teenager, so the discovery of supernatural powers and the responsibilities that go with them is an additional burden. Yet the young ladies manage admirably.

Obviously, the two serials are very different in tone. Sabrina is pure lighthearted comedy. Buffy is darker, with a constant backdrop of evil, and many characters die, but it's not without some humour of its own. 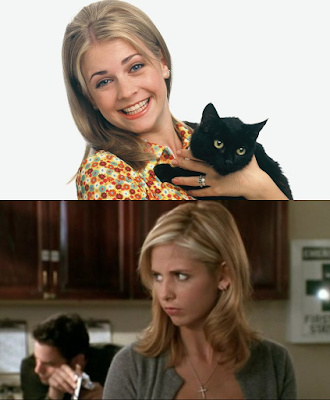 Both serials are almost entirely carried on the diminutive shoulders of their heroines. Sabrina is a cheerful, upbeat girl with a quick wit and a ready excuse for every inexplicable situation she finds herself in. Buffy belies her tiny size and packs a deadly wallop in a fight, not to mention a sharp tongue in everyday banter. 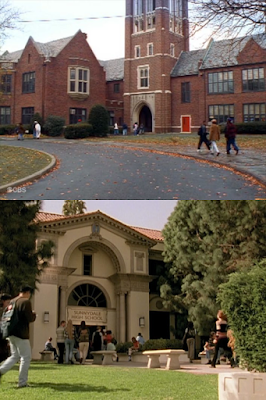 I guess American public schools all look alike, with their classrooms, corridors and student lockers where most of the action in the serials takes place. Both schools see their share of strange happenings, although Sunnydale High, being situated right on top of the Hellmouth, is in an arguably worse situation. 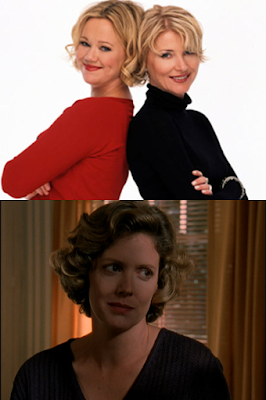 Sabrina's aunts provide a nice foil to each other, with the elder Zelda being (or trying to be) the more responsible one, and Hilda being almost as irresponsible as Sabrina herself. Buffy's home situation is far less humorous, with single mum Joyce doing her best to be supportive and strict at the same time. 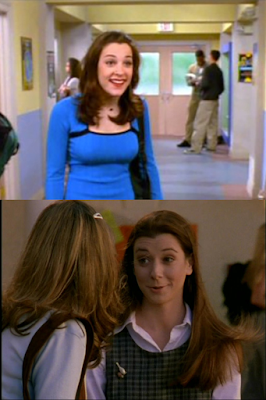 Sabrina had a BFF in Season One called Jenny Kelley (Michelle Beaudoin), who disappeared mysteriously and was thereafter replaced by the angst-ridden Valerie Birkhead. Her closest parallel in the Buffy serial is Willow. Willow develops some magical abilities over the course of the series, but Valerie remains purely mortal. Indeed, she doesn't even know that Sabrina is a witch. 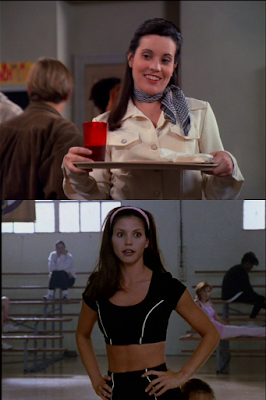 I guess the high school experience for girls isn't complete without at least one mean girl. In Sabrina's case, it's cheerleader Libby with her constant airs and putdowns ("Freak!"). Buffy has to endure the snob Cordelia ("I mean, they promised me they'd take me to St. Croix, and then they just decide to go to Tuscany. Art and buildings? I was totally beachless for a month and a half. No one has suffered like I have. Of course I think that that kind of adversity builds character. Well, then I thought, I already have a lot of character. Is it possible to have too much character?").

But both heroines know how to give it back.

Libby (as Sabrina approaches her table): Looking for the loser convention?
Sabrina: I am...and look...I've found it!

Cordelia: You're really campaigning for bitch of the year, aren't you?
Buffy: As defending champion, you nervous? 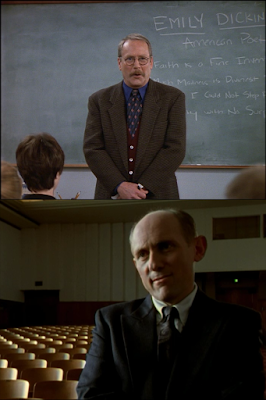 Sabrina is shown to be a straight-A student, and such kids are usually favourites of their teachers and principals. But for some strange reason, her vice-principal Willard Kraft is unreasonably suspicious of her and keeps looking for excuses to give her detention slips. Buffy's principal Snyder probably has more reason for his extreme lack of trust in her. After all, she had started a fire in her previous school. [Later on, it turns out that Snyder knows much more about Buffy than anyone suspected.]

The portal to the supernatural realm 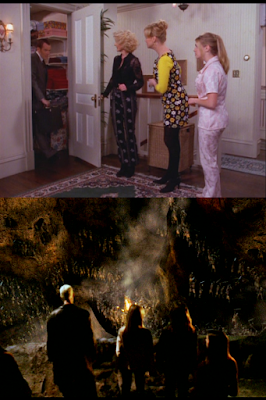 The linen closet;
the Hellmouth

For Sabrina and her family, stepping across to the "Other Realm" is easy. They just walk into the linen closet at home and close the door behind them. A crash of thunder and a flash of lightning from under the door tell us they've crossed over. Occasionally, unwelcome visitors from the Other Realm enter the house through the same doorway. Buffy's Hellmouth is a much nastier business, with vampires and worse crossing over to our human world with alarming regularity. The school is situated right over the Hellmouth, and this is taken as a matter-of-fact explanation for why many strange things keep happening. 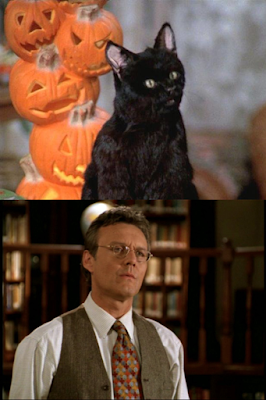 This parallel may be a bit of a stretch. Salem is a "witch familiar", cursed to take the form of a cat for a hundred years, all for the crime of plotting to take over the world, an ambition he has never quite given up. Nevertheless, he comes to Sabrina's aid from time to time with advice based on his years of witching knowledge. Giles is Buffy's "Watcher" and is responsible for her training. While Giles takes his job extremely seriously, Salem would probably run from any such responsibility, sobbing in his trademark way if forced to take it on.

The (male) classmate and/or boyfriend 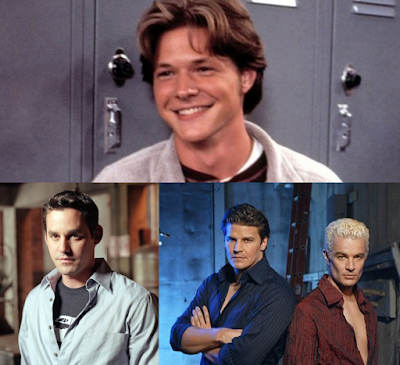 There is no clean parallel between the Sabrina and Buffy serials in this department. Harvey is Sabrina's classmate as well as her boyfriend. Xander initially wants to be Buffy's boyfriend but ends up being just her classmate and friend. At various times, the vampires Angel and Spike end up being Buffy's boyfriends. The big difference is that Harvey remains innocent of the realisation that Sabrina is a witch, whereas all of Buffy's male companions know that she's a slayer.

I wonder how many of these parallels were deliberate. After all, both these serials were made and aired at around the same time. Sabrina ran from 1996 to 2000, while Buffy ran from 1997 to 2001.
Posted by prasadgc at 08:29 No comments: