The temple of the bachelor-god Ayyappa at Sabarimala in Kerala has courted controversy recently, but the issue is a longstanding one, and not something unique to Sabarimala either.

[Sabarimala means Sabari's hill. The word 'mala' is a Dravidian one that means mountain or hill. It is not to be confused with the Sanskrit word 'maala' meaning garland.]

The basic issue is that orthodox Hinduism considers menstruating women to be ritually unclean, and therefore they are not permitted to perform religious rites or visit temples when they have their periods. The Ayyappa temple at Sabarimala goes even further in its restrictions. No female between the ages of puberty and menopause is permitted to visit the temple. In other words, the very capability for menstruation is a disqualification for entry.

In our modern world increasingly informed by egalitarian feminist sentiment, it's only a matter of time before such restrictions begin to be challenged, and a chance remark by a temple priest (perhaps quoted out of context) has ignited a furore.

In the social media age, the appropriate hashtag #HappyToBleed has begun to trend. This campaign is to challenge menstrual taboos in general, not just to seek entry for women into the Sabarimala temple.

In the face of such opposition, the head priest at the Ayyappa temple has dug in his heels and stated the bleeding obvious, that he will safeguard the "purity" of the temple even if he has to resign.

However, it's time to ask some fundamental questions.

One does not need to ask the most fundamental question, i.e., why do people feel the need to worship or go to a temple in the first place? Let us accept that that's a bridge too far for many.

If we accept that people have a need for religious expression, then the next question would be whether it is fair to prevent some from exercising that right merely because of some aspect of nature that they cannot control. If a divine Being created human beings, with all of our bodily functions, why would that Being find these functions suddenly objectionable when these humans try to offer worship?

Indeed, there is evidence in Hindu scripture itself that the divine is not so pedantic.

In the Ramayana, the exiled prince Rama (believed to be an avatar of the god Vishnu), came upon an old woman called Sabari (also spelt Shabari) during his wanderings. Sabari offered him some fruits that she had collected, but she only wanted him to eat the sweetest ones. So she bit into each fruit first to taste it, threw away those that weren't sweet, and only offered Rama the ones that were. Rama's brother Lakshmana was horrified, because of the cultural taboo relating to another's saliva. But the divine Rama looked beyond matters of hygiene to recognise the devotion and love of the old woman. He accepted and ate the nominally defiled fruits without a murmur. 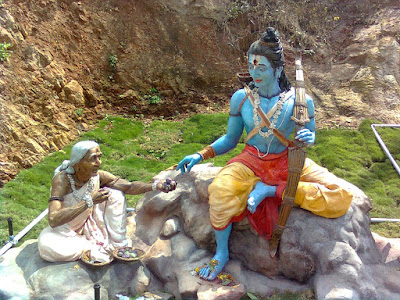 Rama accepting fruits from Shabari that she had tasted first.
Moral: God cares more about devotion than about bodily fluids.

The lesson from the parable of Sabari is clear. God cares more about devotion than about bodily fluids. If the custodians of Hindu temples everywhere (including the temple at the hill ironically named after the old woman) learn that lesson, the practice of the religion would align better with its spirit.
Posted by prasadgc at 02:13 No comments:

I watched 5 movies on the 14 hour flight back from Dubai to Sydney, having slept throughout the 6 hour flight from London to Dubai.

For an animated film, this is surprisingly deep in the seriousness of its content. While I'm no psychologist, I was impressed by its analysis of human behaviour and the functioning of the brain. The story is that of a hitherto happy young girl of 11 who is suddenly uprooted from familiar and pleasant surroundings and thrust into a markedly less pleasant world, with traumatic results. The five emotions in her brain, normally dominated by Joy, develop new dynamics when Sadness, Anger, Fear and Disgust also get a chance to exercise their influence.

The main takeaways for me from this movie are an improved appreciation of the so-called "negative" emotions. Sadness, for example, is useful to analyse problems and also to prompt connections with other people, Fear is useful to protect oneself from danger, and Disgust is also useful in preventing oneself from eating poisonous substances. One needs a healthy balance between all of them.

The best scene in the movie is the family dinnertime conversation between the three main characters. This is picked apart in fine detail using the mechanism of the five personified emotions within each character's brain.

Compared to the 2005 and 2007 versions of the franchise, the 2015 movie failed to impress. I thought the characters were much better developed in the older series. Ioan Gruffud as Reed Richards, Jessica Alba as Sue Storm, Chris Evans as Johnny Storm and Michael Chiklis as Ben Grimm were much truer to their comic book versions (and much more engaging as characters) than Miles Teller, Kate Mara, Michael Jordan and Jamie Bell in the 2015 version. Even the special effects, which one would expect to have improved in a decade, are not as good.

The 2015 film does attempt a change to reflect diversity. Johnny Storm and his father Dr. Franklin Storm are now played by black characters, while Sue Storm, still Caucasian, requires a change of background to become the elder Franklin's adopted daughter. While I favour diversity on screen to mirror society, I'm also a purist and therefore not sure whether tampering with the origins of comic book legends is such a good idea.

They say people tend to cry more when watching movies on planes, and I was fully prepared to use this as an excuse when watching Bajrangi Bhaijaan, but thankfully, the much-anticipated need for tissues did not arise. Perhaps the combination of humorous scenes and some over-the-top situations made it far lighter. The film is a bold attempt at confronting both religious prejudice and ultra-nationalist sentiment within India, and it does succeed to a great extent. However, don't expect me to develop the warm-and-fuzzies for the Pakistani military and the ISI as a result of this film. Also, my negative feelings towards Salman Khan the actor prevented me from warming sufficiently to his character. You can't run over homeless people and ask your driver to take the rap in real-life, while posing as a sincere and devout person for the movies.

Still, when judged on its own merits, Bajrangi Bhaijaan is a pretty decent film.

It's Already Tomorrow in Hong Kong:

I try to watch at least one example of "world cinema", i.e., neither Hollywood nor Bollywood, during every flight, and this time I chose a Vietnamese film ("Gentle"), mainly because it was just 84 minutes long. I found out during the final credits that this film has been loosely based on the Dostoevsky story "A Gentle Creature". The movie deals with the feelings of isolation and the tragic suicide of an emotionally delicate young woman who is married to a well-meaning but excessively formal and distant husband. Set as a series of flashbacks after the suicide, it has the depressing sense of hopelessness of an unpreventable train wreck. This kind of movie is definitely not my cup of tea, and I only watched it because it was short and I had not read the depressing storyline beforehand.

This Ian McKellan-starrer starts with a very interesting premise. Sherlock Holmes is old, living alone in the country with a housekeeper and her young son, and is losing his memory, so much so that he cannot even remember why he retired 30 years earlier. He's vaguely aware that a case that was documented as a success by Doctor Watson was in fact no such thing. Holmes is aware that his conclusion in that case was wrong, and that is why he retired. He did not trust himself after making such a serious mistake. Now in his old age, unable to remember the facts of the case clearly, he struggles to go back and right his wrongs.

The acting (by all characters) is superb, but the pace is a bit slow, and crucially, the resolution of the case isn't very satisfying, although the scene of Holmes's Japanese-style closure is quite touching.

This was a thoroughly enjoyable and riveting movie from start to finish. It has everything one expects to see in a modern superhero movie - a flawed protagonist who nevertheless has the audience's sympathy, some family drama, cool super powers and special effects, plenty of action and suspense, lots of humour and a mean villain.

This Bollywood murder mystery set in Calcutta during the Second World War starts off very promisingly. Of course, I have no idea what wartime Calcutta looked like, but the period setting seemed quite authentic to me, including a logo on some crockery that depicted the borders of undivided India.

However, it ended very disappointingly. There were too many twists in the tale, and it went from being intriguing to contrived in a very short space of time. Also, while a corpse or two comes with the territory, this murder mystery was much more gory than required.

After Despicable Me (1 & 2), I can only say this was disappointing. Some of the gags were funny, including some subtle digs at the English habit of drinking tea (even during a police car chase), but it didn't quite hit the mark.

It's Already Tomorrow In Hong Kong:

This was one of the most watchable "chick flicks" I've seen in a long time. It's quite a short movie (72 minutes), but very engrossing. The two main characters are a Chinese-American girl (who speaks no Chinese) visiting Hong Kong, and an expat white American guy she runs into who has been in Hong Kong for over 10 years and can even speak some Cantonese. It's an utterly believable depiction of how two people (who may or may not be in relationships with other people - I'm not telling) can gradually find themselves slipping into a relationship themselves. The characters, the settings and the conversations are extremely natural and credible, also very funny in places ("So a Chinese person in the US is an immigrant, but an American person in China is an expat?"). It's quite a masterpiece of social commentary, and I could definitely watch this movie again. It's that well done.