As a child, I was a history buff as well as a science fiction buff, and one of my favourite genres was Alternative History, which dealt with questions such as "what would the world be like if the Nazis had defeated the Allies, or if Carthage had defeated Rome"?

As I grew older, the romance of war faded, as I began to realise the truth of General Sherman's famous quote, "War is hell". The romance of history then took on a subtler hue for me, as I began to see the gentler ways in which cultures have influenced each other, even those that were historical enemies (especially those that were historical enemies!).

In early 2012, I visited the fort of Amer in Rajasthan, India, and saw a curious sight, which I wrote about in my blog. 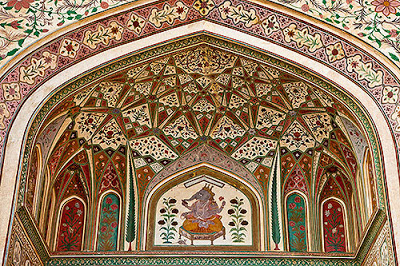 
Islam is uncompromisingly opposed to polytheism and idolatry, an opposition that continues to this day and has caused deep resentment among other cultures. Yet here Lord Ganesh sits peacefully enough, blending harmoniously with the characteristic geometric art of a culture that has historically been hostile to the Hindu pantheon.

I constantly look for such examples of cultural cross-pollination in everyday situations, and I get goose-bumps when I find ones that touch me personally.

For example, when I read about the 2009-2010 "Green Movement" protests in Iran, I experienced a thrill when I read that the protesters had assembled in Tehran's main square, Maidan-e-azadi ("Freedom Field" or "Freedom Square"). Indians need no translation of these words at all. We understand them in our bones. There is an Azad Maidan in the heart of Mumbai as well. I realised with a start that Persian civilisation had touched me personally, after centuries of trade, invasion and cultural exchange had done their work. The world had now reached a point where an Indian-born person like myself could read a news item about Iran in an Australian newspaper through the medium of English - and natively understand the Farsi words in them.

I've been on this cultural forensic quest for a long time.

It occurred to me one day when I was still in my teens that most of my world-view was shaped either by my Indianness or by my exposure to English-language works. Surely, there must be a world of interactions between other people out there that had nothing to do with India or the English-speaking world. For example, the Japanese and the Germans were allies in the Second World War. Surely these two cultures, completely alien to each other but brought together by forces of history, must have had some influence on each other! My father, a linguist, confirmed my conjecture with an example from language. He told me that the Japanese word for part-time work was arubaito, which comes from the German word for work, arbeit.

The influence of the West on the rest of the world is no news. It's the flows in the reverse direction that are more interesting, such as Indian place-names influencing the names of fabrics and clothing (calico, cashmere, jodhpurs and dungarees).

On Christmas evening we were supposed to be specially festive in the Old English fashion. The hall was horribly draughty, but it seemed to be the proper place to revel in, and it was decorated with Japanese fans and Chinese lanterns, which gave it a very Old English effect.

It's this particular kind of "Old English effect" that I'm looking for, where foreign cultural influences are assimilated to the point where they become native. Sort of like curry being considered the unofficial UK national dish, or falafel and hommus being considered Israeli national dishes.

In our post-modern world, we each boast several identities, not just a single one. That's because we are each the product of several worlds that have perhaps collided violently in the past, but which today conspire to influence us with their rich, hybrid flavours.

I'll share my findings on this blog under the title "When Worlds Collude".

GCP, the Islamic arches are more spiked towards the top. This one is not Islamic. Many writers have pointed out this misunderstanding.

The point is not the arches themselves but the larger style of architecture and the artwork, which are unmistakably Islamic.

Can you post some links? I couldn't find anything other than a confirmation that this is a fusion of Hindu and Islamic styles.

There are many such arches in the photographs in the attached link which the author claims have Hindu origins.