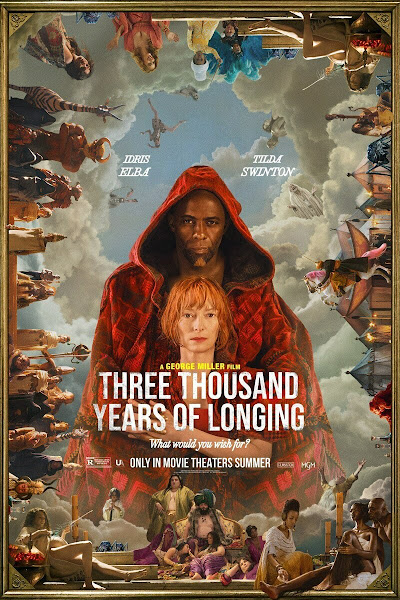 I saw this movie earlier this evening at the cinemas, and thought it was interesting enough to write about.

This won't be my usual style of review. That's because I see this movie as being composed of two layers - an original plot premise, and a certain style of execution.

I'll first extract that plot premise as I understand it, and lay it out for you in distilled form.

Then I'll try to tease out the various core themes and lines of tension that the plot presents, which may then suggest various creative means to resolve them.

Finally, I'll evaluate how well the movie actually delivered on this plot premise, both in terms of storytelling and in terms of cinematography.

The protagonist is a modern-day single woman, a middle-aged professional who has seen a few ups and downs in her life and reached a stage of philosophical equanimity. The story begins when she comes across an interesting-looking bottle in a Middle Eastern bazaar during one of her travels, and buys it. Back in her hotel room, she opens the bottle and out comes a genie who grants her three wishes.

The interesting twist here is that the woman is genuinely contented and does not wish for anything, which surprises the genie.

Besides, she has heard too many stories (and jokes) about this wish-granting business ending badly, to risk falling into the same trap.

The genie needs her to make three wishes, otherwise he will never be free. He understands that the stories she has heard have made her suspicious of genies as tricksters. He then tells her his own life story, about the three times he ended up being imprisoned in the bottle.

The woman then does something.

That's the plot premise. The job of the storywriter is to flesh this out into a captivating story.

Core themes and lines of tension

1. The inner tension between contentment and making a wish - what happens? Does one triumph over the other, or is there another creative way to resolve this conflict?

2. The suspicion that genies are tricky characters not to be trusted - is this suspicion justified? The story could take either tack and run with it.

3. What stories would the genie tell the woman? Ostensibly, they are just a narrative of whatever happened to him, but their ulterior purpose is to overcome her reluctance to make three wishes. So what would the stories be? Would they be true stories, lies, or half-truths? Put together, what course of action would they compel her to take?

4. How would the movie's finale resolve all of these tensions satisfactorily? The genie's selfish motives, the unresolved question of the genie's own trustworthiness, the woman's suspicion of making wishes, her genuine contentment and absence of desire, and the suggested cumulative moral of the genie's three stories - how would they all play out?

To put it bluntly, the movie disappointed me, because I have grown to expect far more intelligent and creative storytelling approaches in modern films. Any number of talented storywriters could have picked up this plot premise and run with it in different brilliant directions.

First, the genie's own stories, while mildly interesting, did not seem to provide any significant lessons. Neither did they provide plot elements that played out in the present day with the protagonist.

Second, the events in the present day, while touching upon elements of modernity, science and technology, did not leverage them in any meaningful way. An early scene shows a speaker on a stage talking about storytelling and narrative, and suggests that advances in modern science and our understanding of the world have dispelled many of the mysteries that in earlier days were attributed to metaphysical phenomena. This is an extremely intriguing idea that makes us wonder how the genie phenomenon would be explained in scientific terms in today's world, but this is dealt with in a very superficial and unconvincing way. Hand-waving about electromagnetism and organic matter isn't enough for an audience used to sophisticated science-fiction.

Third, the protagonist's core character was not leveraged effectively enough. There should have been a dramatic development that both resolved a moral dilemma and heightened the audience's appreciation of her character. If there was one, it was rather weak.

Fourth, there was no satisfying denouement that closed the narrative loop, no "Chekhov's gun" earlier in the plot, for example, that popped up again at the climax to play a pivotal role.

In short, the storytelling was disappointing.

The cinematography was vivid and colourful, providing a swift panorama of Middle Eastern "history" over three thousand years to the present day. This part was well done. (If I had to make a wish, it would be never to be born into a palace. The stress induced by all the intrigues would get to me long before any assassins could.)

Final score: 3 stars out of 5. That's for the original plot premise and the cinematography. Better creativity in fleshing out the plot would have earned it a 4 or a 4.5.