It wasn't my decision to spend two days at a meditation retreat at Wollongong's Chinese Buddhist temple. You could say I was...Shanghaied. My wife booked my son and me, and off we went. 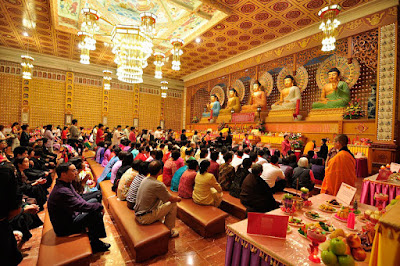 It was a fairly intense set of sessions over the course of two days (from dinner on a Friday to lunch on a Sunday). 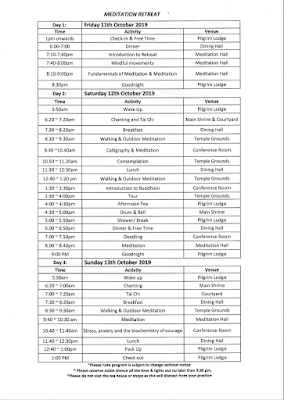 This timetable should give you an idea of what the retreat covered.

There were sessions on not just "sitting meditation", but also "walking meditation" and mindfulness exercises such as calligraphy and even doodling. There were also some tai qi sessions.

These were some of my learnings:

The science and the superstition around Buddhism:

I ignored the "woo" around karma, reincarnation and "other realms" that formed the topic of a few sessions. There was a very good talk by Dr. Susan Sumskis of the Nan Tien Institute at the end of the two-day retreat, and that was the high point of the entire program for me.

What Dr Sumskis said made sense. Mindfulness and meditation help to increase the buffer between external events and our own reactions to them, giving us greater flexibility in fashioning our responses. What the Buddhists call the human condition of "suffering" is alleviated by creating new neural pathways to deal with the curveballs life throws at us.

I have grown up with the Hindu characterisation of Buddha as the ninth avatar of Vishnu, and as I reflected upon this as an adult, I realised that this was a political reaction of the Hindu establishment to the threat of a then-upstart new religion. The strategy was to position Buddhism as no more than a sect of Hinduism by reducing the status of Buddha from that of a religious founder to a docile avatar within an existing  pantheon. (See my unconventional take on the ten avatars of Vishnu.)

But I didn't expect to see this line in one of the chants I heard: 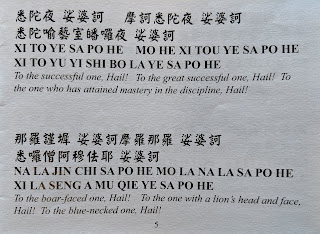 Read the lines at the bottom. Why is a Buddhist chant referencing Varaha (the 3rd avatar of Vishnu), Narasimha (the 4th avatar), and the god Shiva?

Methinks there's quite a bit more to the Hinduism-Buddhism story than we know. Although Buddhism explicitly rejects many of the ideas in Hinduism, it's not just karma and reincarnation that are retained.

One of the sessions was a tour of the temple complex conducted by a person who wasn't part of the monastic order. She provided some interesting history into both the temple and Buddhism itself. However, one of the things she said surprised me and made me research her claim after I got back home. 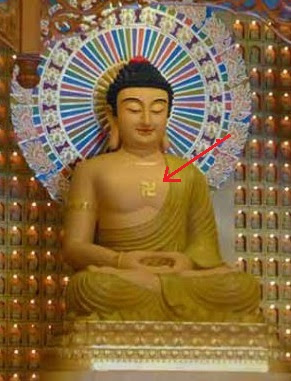 Notice the backwards-facing Swastika symbol on the chest of the Buddha idol.

As would inevitably happen with a Western group, the Swastika on the Buddha's chest attracted some comment. Most people seemed to get the idea that the Nazis had appropriated an existing symbol and given it its modern unsavoury association, but there was no knowledge that the Swastika was an ancient Indian symbol.

Our guide didn't help matters by claiming that it was called a 'Sauvastika' and that it originated in ancient Greece! My first and rather sarcastic thought was that she was confusing it with Souvlaki. Wisely, I held my tongue and didn't contest her claim outright.

After I got back home, I did some research of my own, and learnt that 'Sauvastika' was an actual word used to refer to the backwards-facing Swastika, but this was a term coined by 19th century Europeans to highlight the distinction, not an original Indian term.

Also surprisingly, it appears that there exists a Greek connection after all. The symbol appears in ancient Greek art, but it was never called the Swastika or Sauvastika. It was called a Tetragammadion, because it looks like four Gamma (Γ) symbols joined together.

The most interesting thing I learnt, though, was that the Swastika appears as a religious symbol in all cultures where a god wields a lightning weapon, because its jagged shape represents bolts of lightning. Indra, Zeus, Jupiter, and Odin - all of them are said to be associated with this symbol. This is yet another piece of evidence to me that "Vedic" civilisation is "Aryan" and came to India with the Steppes Pastoralists.

So the lady wasn't outright wrong, but her information was misleading all the same. The most direct connection from the backwards-facing Swastika on the Buddha's chest is to the Swastika symbol used in ancient India. Yes, it's called the Sauvastika, but that's a 19th century European word. Yes, it was also used in ancient Greece, but that's not where the Buddhist symbol came from.

My philosophical takeaway from this episode is that, until India becomes an important world power, a lot of cultural misconceptions and appropriations will continue.

The style in which the monastics chanted the hymns sounded familiar. After some reflection, it struck me that they were singing in a scale known as Bhoopali (in Hindustani music) or Mohanam (in Carnatic music). This is a pentatonic scale and most commonly heard in all East Asian music.

A number of Sanskrit words are retained in the Chinese hymns, but often converted into Chinese forms.

How many Sanskrit words can you find? "Namo" and "Muni" remain more or less unchanged. "Sakya" becomes "Shi Jia", and "Buddha" becomes "Fo".

1. As you can see in the top photo, there are five huge statues of the Buddha in the main shrine of the temple, making it impossible for devotees to circumambulate them, as would be the practice otherwise. One of the priestesses - called "venerables" (which reminded me of Hillary Clinton and her "basket of deplorables") - told us we would have to circumambulate the cushions (pews) instead. It struck me that if we couldn't circumambulate the Sakya prince, we could simply walk around the Kushans.

2. I did a double-take when reading the book of chants. The Chinese character for emptiness ("kōng") looked like a gorilla standing on top of a building! Was it entirely a coincidence that this is King Kong's most remembered scene today?

(If you can't see it straightaway, try this.) 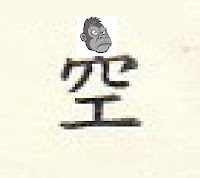