No, The Aryan Invasion Theory Has Not Been Disproved

There has been much rejoicing in Hindu right-wing quarters over some recent news reports on the genetic findings from an ancient burial site in Rakhigarhi, Haryana.

On closer examination, however, the findings from this study do not in any way contradict earlier studies that very clearly support the Aryan Invasion Theory. 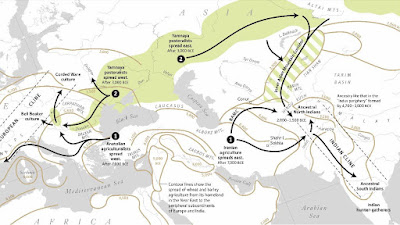 The Aryan influence on India was NOT a benign "migration". It was an armed invasion followed by mass rape, which explains the sudden infusion of Central Asian male DNA (but not female DNA) into the Indian gene pool, which persists today in 17.5% of Indian males

Current thinking by geneticists, based on the evidence collected in the last decade, is that the earliest inhabitants of the Indian subcontinent were South Asian Hunter-Gatherers. These people intermixed with Iranian Agriculturalists who migrated eastwards, to form Ancestral South Indians (ASI), who could be loosely called "Dravidians", and who set up the Indus Valley Civilisation. There was an invasion by Steppes Pastoralists (who could be loosely called "Aryans") from Central Asia around 2000 BCE, and the subsequent admixture of these genes with those in the Indus Valley created a group called Ancestral North Indians (ANI). Subsequently, ANI and ASI people intermixed for many centuries, until strict endogamy was enforced 1900 years ago, which entrenched the caste system. Consequently, "upper-caste" and North Indian people have more ANI (and therefore more Steppes Pastoralist/Aryan) DNA, while "lower-caste" and South Indian people have more ASI (and therefore less Aryan) DNA.

[The one surprising finding from Rakhigarhi is that the admixture of genes from Iranian Agriculturalists was much earlier than previously thought. It probably happened in 10,000 BCE rather than during 4700-3000 BCE. However, this has no bearing on the Aryan Invasion, which happened much later.]

1. Much is being made of the finding that the Rakhigarhi specimen did not have any trace of Steppes Pastoralist (Aryan) DNA. Well, duh! The specimen was from the period 2800-2300 BCE, which predates the Aryan invasion by a few centuries. Of course it would not have any Aryan DNA!

2. Much is also made of the fact that the specimen's DNA has a very high correlation with the DNA of modern Indians, so the implication is that there is negligible foreign (Aryan) DNA in Indians, and that modern Indians descended directly from the Indus Valley civilisation with no external influence, with the further, politically significant corollary that "Vedic" culture is therefore indigenous to India.

There are serious flaws in this argument.

First, it has never been the claim that Aryan DNA was a huge part of Indian DNA anyway. The actual Aryan DNA in modern Indians is relatively small, although not negligible. 17.5% of modern Indian males belong to haplogroup R1a, which signifies an Aryan link.

Second, the Rakhigarhi specimen contributes no evidence to dispute the earlier finding that there was a sudden infusion of patrilineal or Y-DNA (but no corresponding infusion of matrilineal or mitochondrial mt-DNA) from Central Asia around 2000 BCE, when the Indus Valley Civilisation collapsed. This one fact alone strongly suggests that there was an armed invasion of men around that time, followed by mass rape. However unpleasant the scenario is to consider, nothing else explains the sudden and exclusive infusion of male DNA on such a scale at a single point in time, which also coincides in time with the collapse of the Indus Valley Civilisation. If 17.5% of the Indian male population today carries this DNA marker, it must have been a very significant event.

Third, cultural influence can be disproportionate to genetic influence. The British ruled India for about 200 years. Their genetic influence on India was negligible. The population of Anglo-Indians is negligible compared to the overall Indian population. Yet the cultural influence of the British was cataclysmic. From the parliamentary system of democracy, to jurisprudence, to the civil service, to the education system, to the English language, India has been profoundly altered by the experience of colonialism. Why, the very political entity that is the Indian nation-state was the creation of the British. So the argument that the Aryans would have had to have a greater genetic imprint among modern Indians to have influenced Indian culture is baseless. The Aryans were conquerors. They did rape and spread their genes among the indigenous people, but their cultural impact as conquerors would have been far, far greater.

[Besides, if it were to be discovered, for example, that 17.5% of Indian Muslim males had Afghan or Persian DNA, this would be seized upon by the Hindu right wing to argue that all Indian Muslims are "foreigners" and not true Indians.]

Surely the links between Vedic culture and other "Aryan" groups should be obvious to anyone at a glance. Linguists refer to an entire family of languages as "Indo-Aryan" for this reason, with "Dravidian" languages being recognised as distinct. As another example, Hindu, Greek and Norse mythology all feature a pantheon of gods led by a king who wields a thunderbolt weapon (Indra, Zeus, Odin).

It's very obvious to anyone (anyone who considers the evidence dispassionately, that is) that "Vedic" culture came to India from outside, and it was brought by the Steppes Pastoralists (Aryans) who conquered the indigenous people of the Indus Valley and brought their civilisation to an abrupt end. Thereafter, Indian civilisation has been the result of intermixing of Pre-Aryan (Dravidian) and Aryan cultures, with Aryan culture dominating.

In later centuries, the Muslim invaders and then Western colonialists conquered and profoundly influenced India. Modern India, for better or worse, has been shaped by all of these external influences, and it is best to accept this historical fact and move forward, building a modern society based on reason and humanism rather than on narrow chauvinistic identities. There is no sense in trying to uproot "foreign" influences (read Muslim and Western), when "Vedic" culture itself came to India from outside.

In sum, my reading is that the Hindu right wing has been severely embarrassed by genetics findings over the last few years that prove the Aryan Invasion Theory, and they are now clutching at straws.
Posted by prasadgc at 22:21