Real Miracles In Scripture -1 (Kanakadaasa And The Idol That Turned)

One of my pastimes is to ponder "miracles" from scripture and conjecture how those stories must have originated, since, after all, there are no such things as miracles. As Sherlock Holmes says in the case of The Sussex Vampire,

This agency stands flat-footed upon the ground, and there it must remain. The world is big enough for us. No ghosts need apply.

When we look at the stories of miracles with a completely rational eye, we begin to see things that we would have missed had we swallowed the mystical explanation.

In this post, I want to analyse a "miraculous" episode in the life of the Kannada poet and mystic, Kanakadaasa. 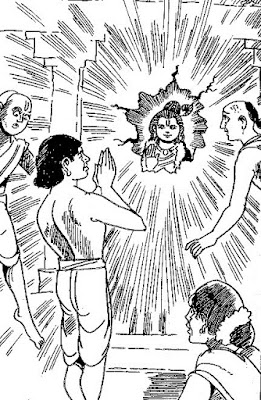 Kanakadaasa and the "miracle" that granted him access to his deity

To cut a long story short, Kanakadaasa was a devout person who once visited the town of Udipi and wanted to see the idol of the god Krishna in the main temple. The priests denied him entry because he was of a "low" caste. Kanakadaasa was despondent, and he went to the rear of the temple and sang his devotional songs. The story goes that the idol of Krishna turned around during the night to face the rear of the temple, and a hole mysteriously appeared in the temple's rear wall, allowing the "low caste" devotee to have a darshan (view) of his deity.

This sequence has been dramatised (melodramatised, perhaps) in the eponymous Kannada movie.

To this day, the idol of Krishna at that Udipi temple faces the rear wall. A window placed where the hole is said to have miraculously appeared is now the standard way for devotees to obtain a darshan of the idol. 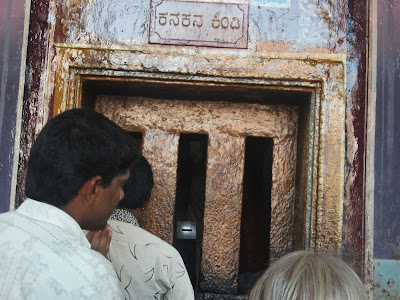 The rear is now the new front

It should be obvious to us as rationalists that no miracle actually occurred. The god Krishna did not turn his idol around, nor did some divine force break a hole in the wall. Yet, the idol is turned the other way, and the rear wall does have an opening in it. Someone human must have done these things. Who was it?

It's in pondering these "miracles" that one realises something fairly heartwarming. Society at the time was officially observant of caste rules, which is why Kanakadaasa could not have been allowed entry into the temple, but someone's humaneness ensured that the man got his darshan after all. I'm betting it was one or more of the temple priests. No one else would have had free access to the sanctum sanctorum where the idol was installed, and it is highly unlikely that anyone else would have dared to enter that area to do something so sacrilegious. If caught, their punishment could have been severe.

No, my bet is on one or more kindhearted priests who did what they believed was the right thing. (I think we can rule out bribery, since Kanakadaasa was probably too poor to afford that.) They turned the idol around, made a hole in the wall, perhaps whispered a "Psst!" to Kanakadaasa to come and get his darshan, and then they must have put on the act of their lives to convince everyone around that a major miracle had taken place.

I'd say a miracle took place all right. Human kindness, and the willingness to break rules to ensure justice, never fail to touch me.
Posted by prasadgc at 07:22