One of my Aussie friends pointed me to a classic short story by the Australian poet and writer Henry Lawson, called "The Drover's Wife". (Click on the link to read it now.)

Read superficially, this short story is a recounting of a few dramatic hours in the life of a woman living alone with her children in the Australian outback. A venomous snake appears, and then ominously disappears under the floorboards of the rough house. The vigil she mounts against the threat of the snake's reappearance, aided only by her dog, occupies the bulk of the story, together with some reflective passages that recount some of the other struggles she has faced alone. Her husband is a "drover", a stockman who drives livestock over long distances, and is consequently away for months at a time. Her children are all very young and require her protection rather than being of help to her. 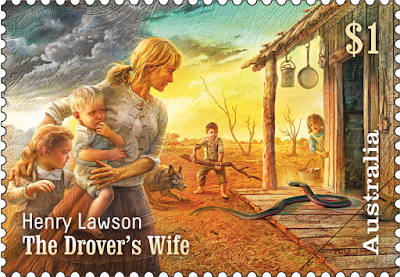 "The Drover's Wife", immortalised in an Australian postage stamp

However, the story is much more than just an evening in the woman's life. It is an allegory for the female condition, and it is as valid today as it was in the 19th century when it was written. I believe it's a feminist text that should form part of any Women's Studies program. It appears from Henry Lawson's biography that his mother's own struggles as a single parent (his father being a miner and away from home for long periods) sensitised him to a woman's struggles and enabled him to write about them so insightfully.

As an allegory, the story actually deals with the specific issue of women's physical safety, and there are five main players:

1. The woman herself, who has to be alert, cool-headed and courageous at all times.

2. The men in her life, whom she cannot rely upon to protect her. The men here are either absent (her husband) or incapable (her young sons).

3. Society as a whole, which enables her to survive when things are otherwise going well, but is not of much use in a situation of immediate threat. The barter she has with her brother-in-law's family is an allegory for the social contract between a family and society.

4. The snake, a classic phallic symbol which here represents the predatory male, the ever-present threat to a woman's physical safety. She has no way of telling when the threat will appear. When it does, she cannot let her guard down for a moment, and has to stay calm and collected to deal with it.

Occasionally a bushman in the horrors, or a villainous-looking sundowner, comes and nearly scares the life out of her. She generally tells the suspicious-looking stranger that her husband and two sons are at work below the dam, or over at the yard, for he always cunningly inquires for the boss.

Only last week a gallows-faced swagman — having satisfied himself that there were no men on the place — threw his swag down on the veranda, and demanded tucker (food). She gave him something to eat; then he expressed his intention of staying for the night. It was sundown then. She got a batten from the sofa, loosened the dog, and confronted the stranger, holding the batten in one hand and the dog’s collar with the other. “Now you go!” she said. He looked at her and at the dog, said “All right, mum,” in a cringing tone, and left. She was a determined-looking woman, and Alligator’s yellow eyes glared unpleasantly — besides, the dog’s chawing-up apparatus greatly resembled that of the reptile he was named after.

5. The dog, the one entity that can protect her with its sharp teeth. The dog represents the Law. That's the only thing feared by the predatory male.

The moral of the story is that women cannot rely on the protection of friendly males, or on other families in civil society. Women are partly responsible for their own safety, in that they must remain alert about potential danger, and must also be level-headed and courageous. They also need to work with sympathetic law enforcement machinery to ensure their safety.

At the very end of the story, after the snake is killed and consigned to the flames, the release of tension makes it possible for other, repressed emotions to come rushing back. The woman's eldest son, an "urchin of eleven", declares,

Mother, I won’t never go drovin’; blarst me if I do!


I believe that was the author's own voice, expressing anguish at the struggles to which his own mother had been abandoned.
Posted by prasadgc at 01:55