From Ahmedabad, we went to Baroda (Vadodara). This is a two-hour train journey, and I introduced my son to the joys of train door travel, Indian-style. 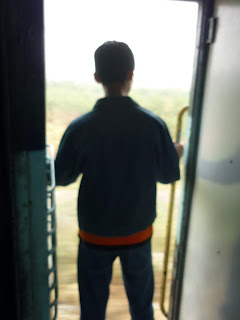 With the wind in your face, this is "air travel"


Baroda city is part of the old princely state of Baroda. After the defeat of the monolithic Maratha empire in the Third Battle of Panipat in 1761, four separate Maratha dynasties rose to power - the Bhonsles of Nagpur, the Scindias (Shindes) of Gwalior, the Holkars of Indore and the Gaekwads of Baroda. 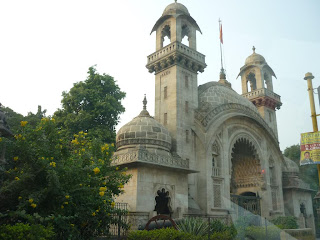 The history of the Gaekwads gives me a lot to think about. It is a sobering lesson in Realpolitik. The British defeated a federation of Maratha chieftains in the First Anglo-Maratha War (1775-1782). Then they supported one faction of the Gaekwads against others and signed a deal that gave them suzerainty over Baroda while granting the favoured Maharaja local autonomy.

The standard lesson that we as Indian students were meant to learn from our history textbooks was how Indian disunity has traditionally favoured the foreign invader, from Alexander the Great, through the various Muslim invaders, to the British. Today, with the passage of time and the benefit of hindsight, I wonder if a different lesson may be learnt.

When we were in Baroda, the city celebrated the 150th birth anniversary of Maharaja Sayaji Rao Gaekwad III (1863-1939). He was known as a reformer and moderniser and is credited with the progress of Baroda in the early twentieth century. All his decisions were taken with the permission of the British, of course, since he was just a vassal king. However, in return for a surrender of sovereignty, the people of his kingdom did enjoy peace and progress. Other Indian kings who are celebrated in history for resisting invaders, such as Rana Pratap, ended up causing themselves and their people much hardship. I don't mean that a ruler must roll over and surrender to an invader without a fight, but in this age when we prize economic progress and the quality of life of citizens higher than wars of honour, the trade-off is worth pondering about.

To celebrate the 150th birth anniversary of the popular maharaja, there was a Sufi music concert organised at the Laxmi Vilas Palace, another palace on the outskirts of the city. My local hosts had received an invitation to this event and kindly gave it to myself and my wife to attend the show. 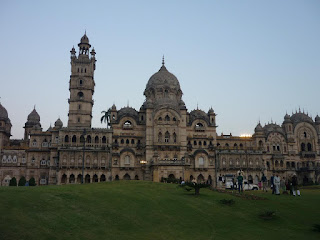 
The concert was by the well-known Sufi singer Kavita Seth. (I must confess I had just read about her in a magazine for the first time a few days earlier.)

As the sun set, the lights began to come on and the palace looked magnificent. More photos here. 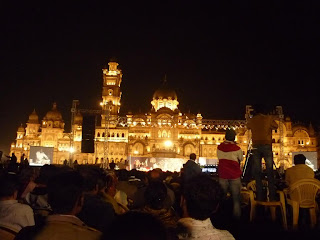 
Her sons Kavish and Kanishk (the former a student at IIT Bombay) accompanied her on different musical instruments. She spoke a little bit between songs. At one point, she made the shocking announcement that she was dedicating a certain song to her husband, who had recently passed away on December 15th. And on Jan 3rd, she was on stage before us, singing. Some people are possessed of phenomenal courage... 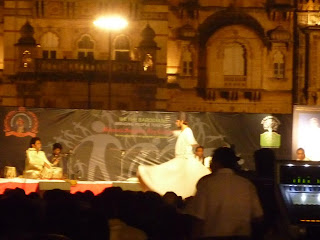 A whirling dervish was on stage, untiringly rotating during each song


They were selling Kavita Seth's CDs offstage. They weren't expensive (INR 200 (about AUD 4 to 5) each), so I bought all the five CDs on offer.

There is a small zoo in Baroda inside the Kamatibagh park. It's very depressing to see animals in cages. Indian zoos are far less humane than the ones in Western countries. The animals in Sydney's Taronga zoo seem much happier and at ease compared to the incessantly pacing leopard, bear and lioness in Baroda. 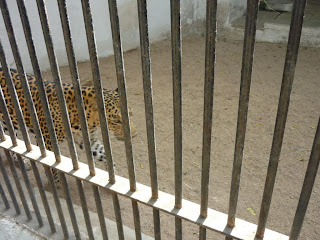 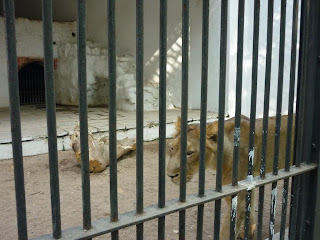 The irony of this crudely drawn poster seems to escape the zoo's management. More spacious facilities would be appreciated by the animals, I would wager. (On the positive side, I was gratified to see that the common confusion in modern "English-speaking" nations on when to use "there", "their" and "they're" has not yet infected India.) 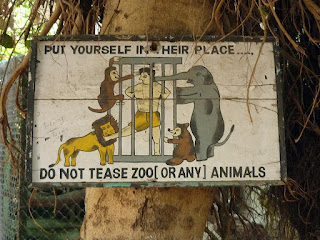 Don't gnaw on a lion's ankle

There were other amusing sights as well. 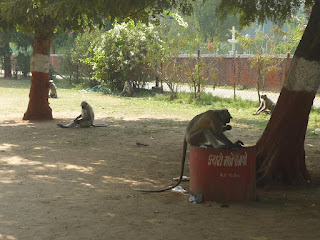 Langurs raid a dustbin.
I'm not sure whether they're part of the zoo's exhibits or visitors like ourselves!


Somewhere within the sprawling park, I came across this temple. 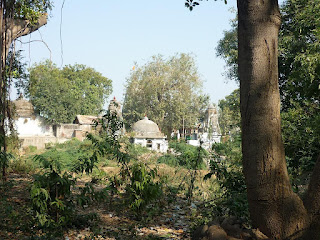 It reminded me so much of the ruined temple in The Jungle Book, the haunt of King Louie and his monkeys. 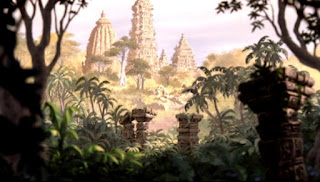 More photos of the zoo are here.

That concluded our Baroda adventure.

From Baroda, we went to Jaipur, and I'll describe that part of our trip in my next post.
Posted by prasadgc at 23:01