Henry Ford's most famous quote is probably this:

"They can have it in any color as long as it is black." 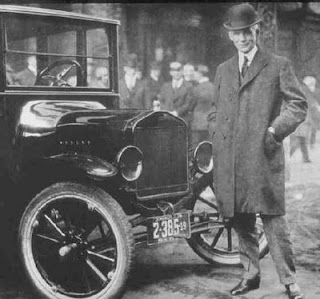 But Ford is also known to have said this:

"If I'd asked my customers what they wanted, they'd all have said they wanted a faster horse."

I think he was right on the money with the latter statement, but the former was just arrogance.

Ford lost out to General Motors mainly because of his failure to meet the legitimate demands of the market. In 1921, Ford had 60% of the market for new car sales. But Ford doggedly insisted on selling a single model (the Model T), while GM began to offer a full line (Cadillacs, Chevrolets and Buicks) at different price points. Obviously customers preferred GM.

The lesson this holds for me is, you can ignore your customers' demands as long as you give them something even better (a car instead of a faster horse). If you merely ignore their demands, you do so at your peril.

I've seen a lot of timidity in the area of software design, where software makers go to great lengths to ensure a good "user experience". They do this by running focus groups and testing various user interfaces to see which ones users like best. This is a valuable approach, but it virtually rules out developing bold and innovative products that create new markets.

After all, no computer user could have asked for the mouse in an age when the only interface to computers was a keyboard. The invention of the mouse surely required a leap of imagination, and its inclusion with the first mass-market computers must have taken prodigious courage on the part of their makers, because every user has struggled to master its use on their first encounter with it. Yet the mouse is nothing less than a marvel of user interface engineering.

The lesson here is that intuitiveness is a function of learning. What seems unfriendly and unusable initially becomes indispensable over time.

We must be bold enough to look beyond customers' stated wants and their current mindsets and instead visualise what can be. Entrepreneurs owe their success not only to their responsiveness to customers' needs but also to their vision of a future that may not exist at the time.