My Economic Philosophy - 8 (Beyond Socialism and Capitalism)

(This is the eighth of n pieces on my emerging economic philosophy called Liquidism.)

I came across this hilarious illustration today:

While funny, it's also sad that both systems have come to represent a zero-sum game in the eyes of many people, a belief that one person's gain must always result in another person's loss. I don't believe this is true. I believe that wealth is potentially infinite, and human civilisation is constantly improving the incentive systems that cause us to apply our ingenuity and industry to increase our collective wealth, with everybody being better off as a result. I believe in the capitalist ideal based on competition and liquid markets (not the cronyism and oligopolistic markets that pass for capitalism nowadays). At the risk of appearing trite, I can sum up my economic philosophy with another illustration: 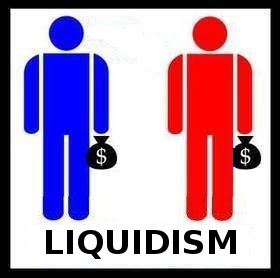 It could be argued that what I call Liquidism is just "capitalism done right", but it does involve some non-intuitive aspects. I arrived at this economic philosophy in stages, and it's the fortuitous result of many coincidental experiences in my life.

My journey began when I realised that "freedom" could mean two very different things, and that one kind of freedom is higher than the other. A freedom that cannot be taken away is superior to a freedom without restrictions. I thank the Free Software / Open Source software communities for sensitising me to this difference.

With that insight, I tried to derive (from first principles) an economic system from a philosophy of freedom, but using the higher of the two kinds of freedom I talked about earlier. In essence, I was trying to redefine a "free market". In the process, I realised that a truly free market had to be a guaranteeably liquid market, not a market without controls. That meant that there was a legitimate role for government (in the absence of any self-correcting behaviour on the part of the market) to step in and enforce liquidity whenever required. In other words, antitrust is not an enemy of the capitalist system (as libertarians make it out to be), but its saviour. That's where Ayn Rand is wrong.

From there, it was only a short step to realising that Liquidism is the next logical step in prudent economic policy, taking the "Australian model" of prudent fiscal policy (avoiding budget deficits) and prudent monetary policy (keeping inflation low through alert interest rate manipulation) to its natural conclusion by ensuring high market liquidity as well. I have been privileged to be part of the Australian economy for over a decade now, and I marvel at the simple yet effective way in which the Australian government and central bank have together kept the economy consistently booming in the face of worldwide boom-bust cycles. The Australian model has many aspects of a welfare state, but that welfare state operates within the discipline of a balanced budget. Australia has shown the world how to reconcile capitalism and socialism. However, many segments of even the advanced Australian economy are held to ransom by oligopolies.
It's unfortunate that nowhere on earth can an example be found of the perfect economic system. Worse, very few people have shown an interest in getting there. Until now.

I have finally seen the vindication of my philosophy in the market failures of 2008, and I realised (as did an eminent economist and old classmate of mine), that capitalism has to be saved from the capitalists. In a truly liquid market, the effect of a single player (or even a few players) has no perceptible impact on the market as a whole, so bailouts using taxpayers' money are never required. But in our imperfect world, large players always act to preserve their oligopoly, by making it harder for themselves to fail (governments are forced to prop them up using taxpayer's money in the larger interests of market stability, making a mockery of the free market in the process) and by erecting scale barriers to newer entrants. I'm sure the downsides of having extremely large players in the market has become apparent to others as well. We just need to join the dots and go where the logic leads us, i.e., to a guaranteeably liquid market, where no player can ever become large enough to unduly influence the market.

However, entrusting the role of market "liquefier" to governments is fraught with danger. Governments are corruptible, as we all know. The timidity of competition watchdogs in our economies is testament to the power of incumbent market players to protect their interests. Governments and legislative bodies are influenced more by market incumbents than by companies yet to be formed. Therefore, liquidity-seeking behaviour needs to be driven into the DNA of the basic unit of capitalism itself - the corporation. Corporations need to have an "amoeba gene" that causes them to grow and split ad infinitum, rather than grow and merge. This is the only way that the market can inherently (i.e., without external intervention) be prevented from consolidating into an oligopoly or monopoly. Such a solution would satisfy Ayn Rand as well. In this context, it must be pointed out that divestitures do not reduce shareholder wealth. On the contrary, new wealth can be released when diseconomies of scale are eliminated and competitive energies are unleashed. The few examples we have of corporate breakups (such as AT&T in 1984) bear out this optimism.
I think it's time the world innovated a new kind of corporation that contributes to market liquidity instead of opposing it. This may need to be defined and enshrined in law, just as the notions of "joint stock company" and "limited liability" were previously formalised through acts of legislative bodies. The capitalist system can then be relied on to generate wealth in a sustainable way, without needing constant government oversight and intervention, and without suffering the periodic system-wide collapses it is prone to in its current suboptimal form.

My concept of Liquidism has been a gradual awakening rather than an epiphany. I still read semi-informed (yet heated) debates in many forums about the merits of different ideologies and varied reasons for our recent financial crises. Although I don't want to sound overconfident, I'm increasingly convinced that I have found the answer to these questions. I think Liquidism is the key to future financial stability and world prosperity.