I lived and worked in Bombay (Mumbai) for 8 years between 1987 and 1995 (apart from a year and a half when I was in Kanpur). I didn't realise it then, but this was the very first time I experienced what may have been taken for granted by many others. For the first time, I heard Bollywood songs on a regular basis, and it was all around me - on the radio, on TV, from roadside loudspeakers, etc.

This had never happened to me before. During my childhood in Bangalore through the 70s, I mostly heard Kannada songs on the radio. During my IIT Madras days (1980-85), it was Tamil songs. I discovered Hindustani classical music during my stint at IIM Ahmedabad (1985-87), and that was what I played when I visited the institute's DJ club. The music that I consciously sought out and played during my teens was Western pop. So I had never previously experienced anything like the barrage of Hindi film songs that hit me when I moved to Bombay in 1987.

While I have many, many favourites from that time, I thought I'd focus on those that I later found were from movies starring Sanjay Dutt.

I know he's a controversial character, but I've always had a soft spot for him because of his sad puppy-dog eyes, and the many personal tragedies in his life.

And so, the songs:

Saajan was a very silly movie, IMO. But many of the songs were good. This clip also captures the pathos of Dutt's character, who is a cripple.

In this clip, the most moving scene for me is when Dutt's character sees himself without his handicap. 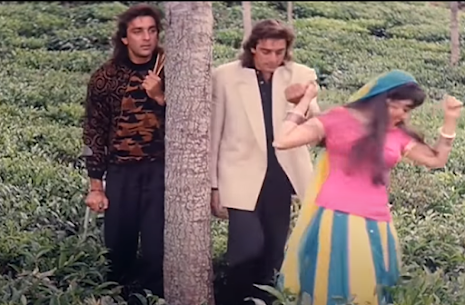 "Par saamne jab tum aate ho, kuch bhi kehne se darta hai"
(But when you are before me, (my heart) is too scared to say anything)

I haven't seen this movie. I know the story, and it's too gritty for me. But the song was very touching.

I haven't seen this movie either, but I like the song a lot.

"Cheerke dekhe dil mera to, tera hi naam likha rakha hai"
(Tear open my heart and see, it is your name that is written inside)