It was recently remarked upon that Modi has been seen with a longer beard than his usual trimmed one. It was also speculated, with good reason, that this is part of a deliberate PR strategy to make him appear like a wise old rishi (sage), so as to make him even more venerable to his devout followers. 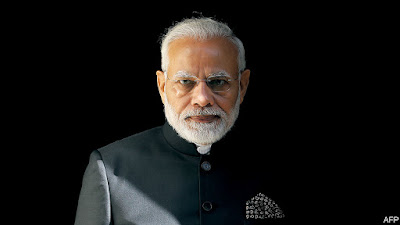 The old trimmed beard, giving Modi the efficient and deadly look that suits him so well (OK, he may not be efficient, but he is deadly, as his many victims would attest (if they're still around)) 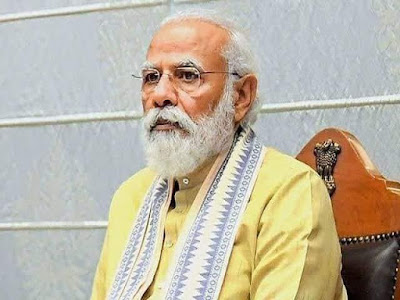 The new, longer beard - an attempt at cultivating a sage-like image. Does it work?

I must say that the rishi look reminded me of so many less-than-complimentary episodes from Hindu mythology that I simply couldn't understand how this was supposed to be a positive image makeover.

1. Shakuntala and the curse of Sage Durvasa

When Sage Durvasa visited the ashram of Sage Kanva in the latter's absence, his adoptive daughter Shakuntala attended on him. But she was lost in daydreams about King Dushyanta, which enraged the sage. He cursed her saying Dushyanta would forget her. (Of course, it all ended well eventually, but this is the bit that we're interested in.) 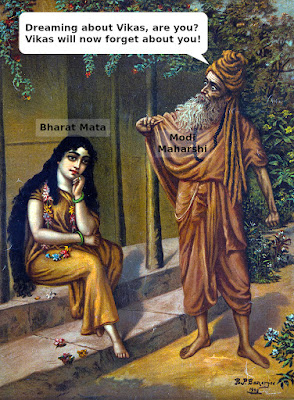 After all the talk about Vikas (development) during his pre-2014 election speeches, can one blame a poor nation for daydreaming about it? Apparently yes. The Modi curse has taken effect, most dramatically.

2. Ravana and his abduction of Sita

Ravana's devious plan to abduct Sita consisted of having his henchmen lure both Rama and Lakshmana away from their cottage deep into the forest, while he approached Sita disguised as a mendicant and begged for alms. He hadn't reckoned with the lakshman rekha, a charmed line drawn with the tip of an arrow by Lakshmana around the cottage, which acted as a barrier to the demon king. Ravana then realised he would have to lure Sita out of the magic circle through sweet words and deceit. Gullible Sita trusted the cunning mendicant and stepped outside the protective circle. Once the deed was done, nothing could save her, and Ravana carried her away. 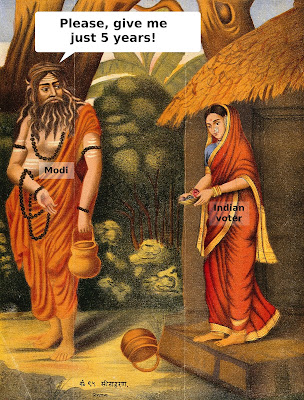 Once voted in, the man proved impossible to dislodge, helped amply by the fact that he has no credible opposition. Even those who can now see that he is a demon are resigned to his perpetual rule.

3. Vishwamitra and the creation of Trishanku Swarga

King Trishanku approached Sage Vasishtha with a request to be allowed to ascend to heaven in his earthly body, and the sage outright refused his outlandish request. Trishanku then approached Vasishtha's arch-rival, Sage Vishwamitra, with the same request. Vishwamitra took on this task with relish as a way to stick it to his rival, and performed a ritual to enable Trishanku to rise to heaven in his earthly body.

Things came unstuck when Indra, king of the gods, pushed Trishanku out of heaven, and he tumbled back to earth. Vishwamitra halted his fall, but couldn't push him back into heaven. So Trishanku remained stuck, upside-down, between heaven and earth. As a consolation, Vishwamitra built an alternate heaven around Trishanku ("Trishanku Swarga"), but he remained upside-down. 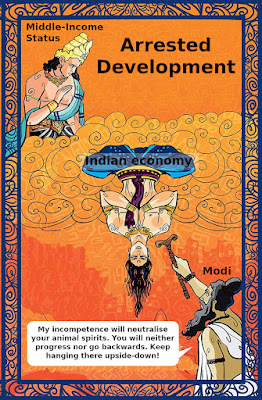 The Indian economy has strong fundamentals, and can potentially grow at double-digit rates under a wise government. Alas, Modi's government is anything but, and so the economy is stuck, unable to progress in spite of its inherent entrepreneurship and pent-up demand.

During Vishwamitra's penance, Indra (the king of the gods) sent Menaka, an apsara (nymph) to distract the sage and prevent him from attaining formidable spiritual powers. She succeeded, for a while at least. 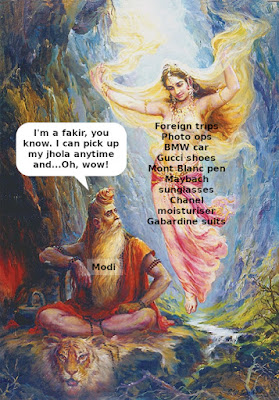 Modi has claimed more than once to be unattached to the loaves and fishes of office, but betrays an unbecoming fondness for them all the same.

Well, what do you know? The story comes full circle because the daydreaming damsel we saw earlier was none other than the daughter born to the apsara Menaka and Vishwamitra. He didn't want anything to do with the baby, so Menaka handed him over to Sage Kanva, who adopted and brought her up. 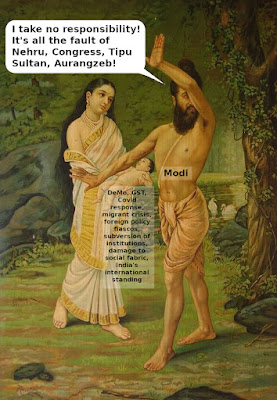 For a man who was acerbic in his barbs against the Congress government before the 2014 election, Modi shows a curious reluctance to take responsibility. He is quick to claim credit for all successes, even if their seeds were sown by previous governments, but equally quick to pass the blame for his failures onto any convenient scapegoat.

The demon Bhasmasura prayed long and hard to Shiva, and when the latter appeared before him to grant him a boon, Bhasmasura asked for the ability to reduce anyone to ashes by touching their heads. A careless Shiva granted the boon, then was horrified to see Bhasmasura attempt to touch Shiva's own head. Shiva ran for his life, and it was only Vishnu (in the guise of the temptress Mohini), who managed to trick Bhasmasura into following her dance moves, culminating in her touching her own head... 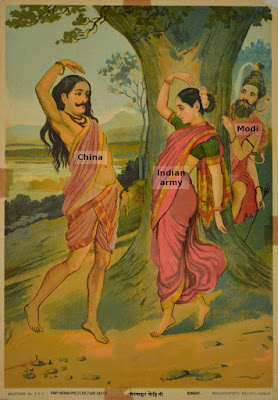 Modi (and his followers) have made much of his "muscular" foreign policy combined with a highly personalised style of diplomacy, and he devoted a great deal of effort towards wooing China's Xi Jinping. But things went horribly wrong when Modi's failure to adhere to his agreement with Xi (the so-called "Wuhan Consensus") led to a military confrontation in June 2020. While the Indian army acquitted itself creditably during that episode, Modi's own behaviour was disappointing. In his speeches following the confrontation, he did not mention China by name even once!

I don't think a longer beard is going to do Modi's image any favours. His new look only reminds one of several episodes from Hindu mythology when sages did less-than-wonderful things.

I think he should go back to the trimmed and deadly look.