Carnatic Music Appreciation For The Once-Scarred 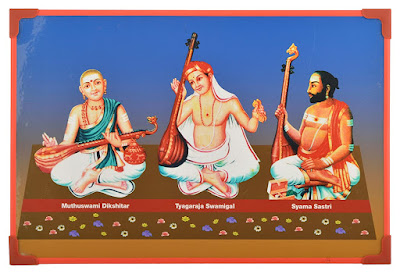 A North Indian friend of mine posted on Facebook about his frustration at not being able to appreciate Carnatic (South Indian classical) music in spite of repeated attempts with an open mind. He could deeply appreciate Hindustani (North Indian classical) music, and his sense of puzzlement came across in his post. The two genres of music are based on very similar concepts of scale and rhythm, so why did one transport him while the other utterly fail to impress?

I could also see that he was trying hard to balance honesty with a desire not to offend South Indians. After all, there is no polite way to tell someone, "I think my culture is superior to yours," even if that was the truth.

As a South Indian, I realised I could help him out without the constraint of political correctness that handicapped his expression.

I'm reproducing my response to him, suitably annotated and modified:

I feel your pain. There is nothing wrong with you. It's not you, it's Carnatic music ;-)

It amazes me how two genres of music (Hindustani and Carnatic) that are based on similar principles of raag and taal (or raga and tala) can sound so different aesthetically.

One of the theories I have heard is that voice quality is given a lot more importance in the Hindustani tradition. In Carnatic, technical perfection is valued far above voice quality. A Carnatic vocalist is lauded for a performance where they adhered strictly to every beat, note and nuance of the compositions they rendered even if they sounded like a toad. A certain female doyen of yesteryear who was popularly known by her three initials (but who shall remain unnamed in this blog) was one such prominent specimen of the family bufonidae.

I'm South Indian and I grew up in the South till my twenties. I had heard Carnatic music off and on during this period but never warmed to it. Then when I was 22, I heard Hindustani Classical Music for the first time (Check out item no. 6 in this blog post of mine), and my mind was blown. I've been kicking myself ever since for having wasted the first 22 years of my life.

Having said that, I have learnt to re-appreciate Carnatic music in limited contexts, and I will share some of these approaches with you.

The Carnatic style has certain advantages. The songs are typically in a faster tempo and mercifully short. Also possibly a positive from your perspective is that the lyrics are all religiously-themed, unlike much of Hindustani music which is of the "piya nahin aavat, souten ghar jaavat" type.

[Connoisseurs of Hindustani music may squirm here, but too many lyrics are devoted to the theme of faithless husbands who leave their wives pining for them while they enjoy themselves in the company of a mistress.]

And so, my approaches:

1. Try instrumental if toad vocals don't appeal. Saadhinchane in raga Aarabhi (I don't know the Hindustani equivalent) by the late U Srinivas on the mandolin is absolutely rollicking. You will probably tap your feet to it on the first go, and by the third time you play it, you'll be hooked. It's incredible.

2. Some ragas sound distinctly better than others. NaaTTai and Shahaana are two that I like. The closest equivalent to NaaTTai in Hindustani is Jog. NaaTTai is very majestic, more so than even Darbaari, IMO. Maha Ganapathim in NaaTTai is one of my favourites, and this piece also has relatively pleasing vocals. You may hear echoes of the Dil Se title song, since that is in Jog.

3. A lot of Carnatic music has been composed for dance (Bharatanatyam and Kuchipudi), and is hence strong on rhythm and quite catchy. (I have an analogous rant on how the Andhra-origin Kuchipudi style is so much more graceful and elegant than the more famous Bharatanatyam style of my home state Tamil Nadu). Watch Sandhya Raju perform this Kuchipudi piece which is again in Raga NaaTTai.

4. There's quite a bit of Carnatic fusion music going around, and some of it is quite good. Agam is, I believe, a Bangalore-based group that has come up with some good numbers. Being from Bangalore myself, I like to think Bangalore types are a lot more cool than their cousins from staid old Chennai. Try their Dhanashree Tillana, originally composed by King Swati TirunaaL of Kerala (or by one of his many court composers who signed over their IP to him!)

[As an aside, this particular piece (Tillana in Raga Dhanashree) seems extremely popular for dance and fusion. See my blog post on this.]

5. When Carnatic fusion and dance combine, the effect can be doubly pleasing. Watch this dance by two talented girls, choreographed around "Swans of Saraswathi", Agam's rendition of BanTu Riiti KOlu in Raga Hamsanaadham

6. The old mainstay for small, bearable doses of Carnatic music is of course film songs. I grew up in Bangalore in the 70s, and the Kannada film songs of the period were often based on classical ragas (mostly Carnatic but also Hindustani on occasion). Since you posted Raag Malkauns, here is a film song in the Carnatic analog (Raga Hindolam, not to be confused with the Hindustani Hindol). The blurb on an old Music Today cassette on Night Ragas talked about "the sublimity and sense of cosmic movement" of this raga, which always comes across for me, whether I listen to Malkauns or Hindolam.

Avoid watching the cringe-inducing visuals if possible, although you will no doubt wonder about the context. A boy's family has come to a girl's house to "see" her in regard to marriage, and as is often the practice in South Indian arranged marriages, the girl is asked to sing. The lyrics are about Krishna who came from Brindavan to see Bhama (his second wife Satyabhama after Rukmini).

7. Comic relief: You probably know the "ruk-ruk-ruk" song from the Bollywood movie Vijaypath featuring Tabu. In the Tamil movie Avvai Shanmugi (remake of Mrs Doubtfire/Chachi 420), Kamalahaasan (in disguise as a respectable "mami") sings this song in a sabha, but in the Carnatic style. The Raga is Shahaana, which I had mentioned earlier as one of my favourite Carnatic ragas.

Could not access one video which was a fusion example.

When I started with the mandolin piece I thought this is going in the same direction. However having faith in your taste I tried all other pieces, and to my surprise I loved each and every other piece.

The dance pieces were beautiful. I love bharatnatyam and kuchipudi.

The Hindolam was as good as any. There is something in that programming of notes which makes my whole being respond positively. And this one did too.

However the mahagaanapathim nattaai takes the cake. Worth listening to it repeatedly.

And Kamal was really funny. I am sure he ssung this himself. He is very talented.

Thanks for this compilation and your intention to show me the light. Heartwearming. And indeed enlightening.