The Three Singularities In Our Future

Ray Kurzweil's 2005 prediction of the "Technology Singularity", the point in time when machines will finally overtake humans in intelligence, is looking more inevitable as the years go by.

We are seeing this first-hand today with the pervasive growth of intelligence in the everyday "network". GPS that can help us navigate efficiently through real-time changes in driving conditions, messaging software that suggests suitable responses and suitable endings to sentences, IVR systems that provide self-service functions over the phone, and many more. And we read about breakthroughs in Artificial Intelligence, such as the many applications of Deep Learning. 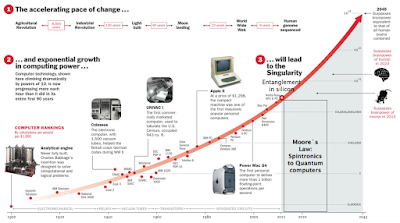 The moment that Skynet becomes self-aware...

All this is exciting, but it's also scary. That's not just because of some Terminator-style doomsday scenario, but because of the much more mundane prospect of mass unemployment.

There is a second singularity that is also approaching, which I call the "Energy Singularity". I define it as the point at which the marginal cost of energy production and transmission is virtually zero. In other words, the world can access as much energy as it needs at virtually no cost. The infrastructure to deliver energy has already been paid for at this point, and the investment can thereafter be harvested ad infinitum.

We're putting in place the infrastructure for the Energy Singularity as we speak, but we don't realise that we're doing it. We think we're saving the planet from climate change by reducing the emissions from hydrocarbons, but we're actually doing something of far greater significance. We're making energy sustainably cheaper to produce, and one day the marginal cost per unit of energy will be virtually zero.

We're seeing some early signs of this. Germany is now producing 35% of its power requirements from renewable energy. Chile is producing more solar power than it can consume, and is consequently giving energy away for free! There is talk of households being able to go "off the grid" with solar panels and battery storage. The cost of solar panels has been dropping significantly over the years, and the cost of battery storage is beginning to follow a similar downward trend. 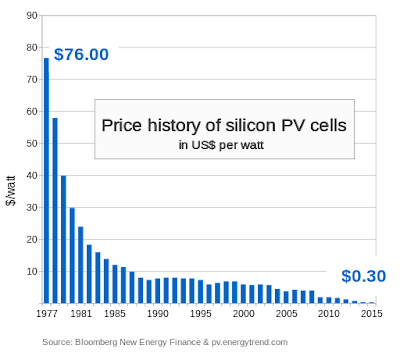 It's not hard to extrapolate forward to a future where energy is available in abundance at a price point that is virtually free, because the cost of the infrastructure that produces this energy has already been amortised.

These two trends together bode very well for the productivity of society in general, whether in the primary (agriculture), secondary (industry) or tertiary (services) sectors.

In fact, since energy is the ultimate currency, the availability of cheap and abundant energy (The Energy Singularity) means that human society will become unimaginably wealthy in a very short time. Humanity does not even have to exert itself to guide the application of that energy towards productive ends, because Artificial Intelligence is capable of doing it on our behalf (The Technology Singularity).

However, the imminent arrival of the Technology and Energy Singularities doesn't necessarily and automatically translate to a higher standard of living for human beings. There is a certain conscious economic "rewiring" of society that will be required to transition to this better future and to minimise the pain of the transition.

The point at which this rewiring takes place is what I call the "Economic Singularity".

After all, the implied social contact between households and firms has looked like this for a few generations now: 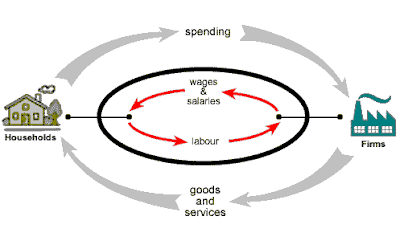 There are two cycles here, one clockwise and one counter-clockwise. The inner, counter-clockwise one is the employment cycle. Firms hire labour from households and pay wages as compensation. The outer, clockwise cycle is that of consumption. Households buy goods and services from firms, using the money they have earned through wages. The two cycles - inner and outer - have to be of roughly equal magnitude for the system to remain in equilibrium.

Consider however, that as firms become capable of replacing human labour with machine labour, the inner cycle necessarily begins to weaken. 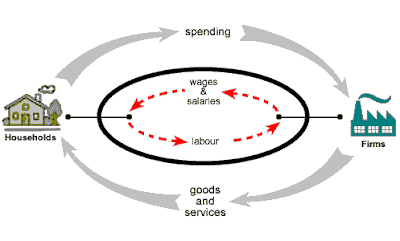 In other words, the consequence of rising productivity through increased automation is unemployment. Firms can continue to produce and sell the same volume of goods and services, without hiring and paying for labour at the scale they used to earlier. 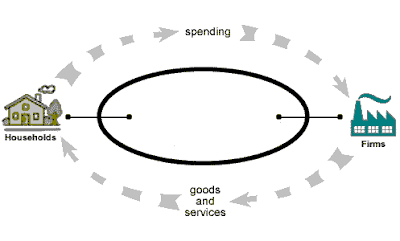 It cannot last. The economy will grind to a halt if households have no money to spend. This is now being called "Secular stagnation"

It's easy to see that if households suffer from mass unemployment, they will not have the means to spend on goods and services produced by firms. So it doesn't matter how productive firms are, or how competitive their prices become. They will simply not be able to sustain their volume of sales as time goes on, and the economy as we know it will grind to a halt.

Of course, long before that stage is reached, there will probably be bread riots and violent revolution, because people are unlikely to starve quietly.

It's obvious that firms are being extremely short-sighted in their headlong pursuit of productivity advantages through automation of their workforce. They are unravelling the delicately balanced wiring that keeps the economy going. If the captains of industry don't want their heads to be carried on pikes at some point in the inevitable popular revolution, they should start to look at alternative wiring of the economy to compensate for the weakening of the inner circle. Governments and monetary authorities should both realise that monetary levers will not work anymore. Interest rates are at their historical lowest, and cannot stimulate the economy by going even lower. The stimulus has to come from fiscal levers.  Money has to be put into the hands of ordinary people to get them to spend.

The Economic Singularity, the point when society rewires itself in a sustainable way so that equilibrium is again attained, will require the intervention of governments. Here is what that could look like: 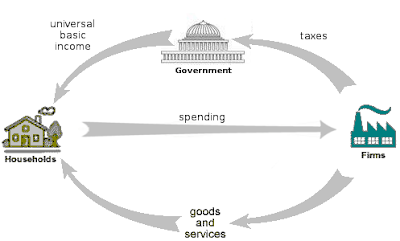 The long-prophesied "leisure society" after the Economic Singularity

In other words, the firms that produce goods and services for profit without employing human labour, consuming virtually free energy and using cheaply acquired raw material must pay taxes that are then distributed to households as a "Universal Basic Income", credited directly into bank accounts. Households then use this income to spend on goods and services.

This is a new equilibrium that gives every person what they need without their having to work for it. The Economic Singularity will mark the beginning of the much-awaited Leisure Society.
Posted by prasadgc at 09:13