The Stigma of Rape And Where It Belongs

I am outraged by the constant tendency to blame the victim in cases of sexual harassment, molestation and rape, and we've seen many recent examples of this over the past few weeks.

"She must have asked for it"
"She was wearing indecent clothes" (substitute "Western" for "indecent" when preferred)
"What was she doing out so late at night, anyway?"
"She's unmarried, and she was out with some guy."

The focus is always on the woman, her purported character or the lack of it, her "indecent" clothes, her decision to be out late, the relationships she has with men, etc.

The focus is never on the sexual offender, the molester, the rapist. His behaviour is always excused on some grounds or the other.

Rape is not treated as a crime committed by a man. The incident is taken as an opportunity to impugn the character of the woman. Worse, it is also made out to be a loss of honour - again, for the woman. Never mind that it was the man who acted dishonourably.

As an example of this latter bias, media stories on rape are generally accompanied by an illustration of a defeated woman sitting with torn clothes and covering her face in shame. Such a conventional portrayal reinforces very mediaeval attitudes even among people who condemn the crime, because it stigmatises the woman and turns the focus of a violent crime into a loss of "honour" that she has to suffer. 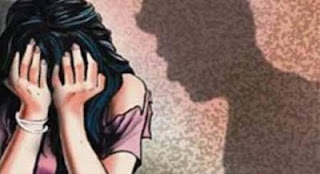 What has she got to be ashamed of?

This is from a recent article in DNA, an otherwise refreshing voice: 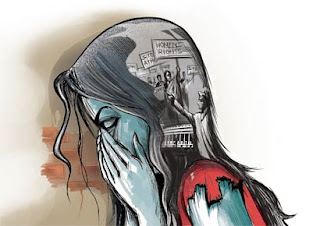 Again with the shame and the torn clothes. Hello...?

This is from an article in OneIndia News: 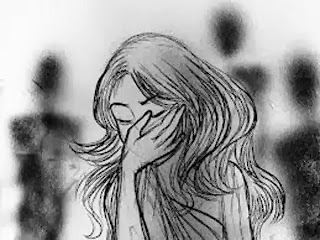 Obviously, expressions of shame cannot be depicted on shadowy figures, so the victim will have to wear one.

This is from a recent article in the reputed magazine India Today: 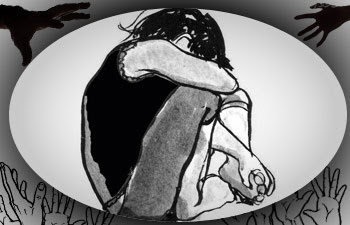 This is getting ridiculous. One would think a relatively enlightened mag like India Today would be able to break free of stereotypes

This is from a news item in the Times of India.

Should even a teenage girl feel ashamed of herself for what was done to her? 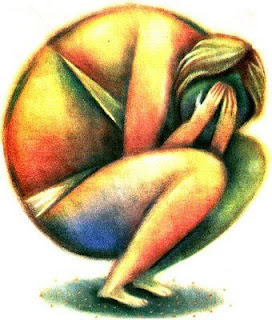 It isn't just the Indian media. Western media also seem to associate shame with the victim rather than with the perpetrator.

I was finally motivated to create a picture of how rape should be represented in the media, with the onus placed firmly where it belongs. 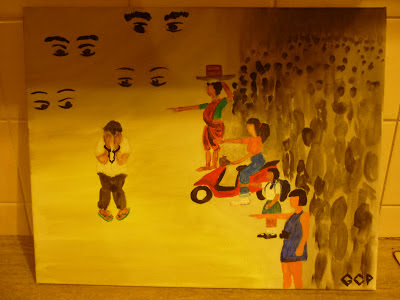 "The Stigma of Rape" (Click to expand)
I'm obviously no Michelangelo, but someone had to step up and do it

I've represented a few different concepts in this painting.

All of these go towards making the single point that the stigma of rape is on the rapist, not on the woman who has been raped. This is a deliberate reversal of the conventional pictorial portrayal of rape, which features a shamed woman.

In this painting, for a start, there is more than one category of victim - a poor and uneducated construction worker, an educated college girl or working woman, a schoolgirl and a female foreign tourist. They're wearing different types of clothes, - a sari, a T-shirt and jeans, skirts.

The clothes themselves are normal ones that women would be expected to wear in any civilised society, so this is deliberately confronting the idea that certain types of dress are immodest. Also, even the woman wearing a traditional, conservative dress like a sari has been a victim, so the point being made is that there is no link between a woman's dress and rape. Western clothes are not "indecent" and Indian clothes are not "decent". The cause of rape is in a man's mind, not in a woman's clothes.

The crowd is behind the women. This shows that the women have the full support of their family, friends and society at large. Many men are in the crowd supporting them, so this is not a gender war.

The four pairs of disembodied eyes in the background represent the judgement of society (The Tamil phrase naalu peyr ("four people") means "society"), and they are all on the rapist. He is clearly the one whom society blames.

The rapist is standing in a defensive crouch with his handcuffed hands covering his face. He clearly understands that he is in the wrong and he is ashamed. The handcuffs symbolise the fact that the law too is sympathetic to the victims, practically manifested through fast processes and high conviction rates.

The women are not covering their faces. They are able to look the rapist in the eye and point an accusing finger. They have no need to feel ashamed because they have done nothing wrong. They are also not afraid of any threats.

All shame and dishonour are on the rapist.

This is the way a progressive society looks at rape.

Now, I'd like to have this image professionally photographed and made available under a Creative Commons Licence so that it can be freely used by anyone instead of the regressive images being used today. Any suggestions?

Absolutely agree with your view here ... the only dishonourable person is the one committing the crime...

Am super impressed with your expressive painting!!