Where Are You In The Moral Grid?

I have been thinking about this model of humanity for a while now. My attempts so far, to place adherents of organised religions, non-denominationally "spiritual" people and rationalists (agnostics and atheists) on some kind of spectrum or scale, have not been very satisfactory.

However, recent events have convinced me that the cornerstone of morality is empathy. It is precisely at points when people fail to show empathy that breaches of morality occur. No one who feels another's pain as their own would harm another in any way - whether through dishonesty, physical harm, cruel words or even a lack of positive action. This is "Do unto others..." in action. However, the principle does not owe its origin to the Bible or any religious text. Empathetic behaviour has been observed in primates and is most probably an evolutionarily favourable trait. Empathy, and therefore morality, pre-date any organised religion.

[It's important to emphasise that empathy does not imply abnegation, or the constant sacrificing of one's own interests for others. It merely means that one treats others as one treats oneself. In other words, we must be kind to ourselves as well as to other people. Overall, empathy is a fairer concept than either selfishness or martyrdom.]

Also, as I have commented before, I believe sexual behaviour by itself is morally neutral. It is only when one combines sexual desire with a callous disregard for the feelings of another person does one commit acts of sexual immorality. Infidelity, sexual harassment, molestation and rape fall into this category. However, homosexuality, non-marital sex between two consenting adults who have no prior commitments to third persons, masturbation and other sexual acts traditionally deemed by organised religions as "immoral" are not characterised by a lack of empathy (indeed, they may involve profoundly empathetic feelings), and hence they are not immoral. [While this is bound to be controversial, I don't believe that consensual polygamy is immoral either, for the same reason.]

I have also studied the phenomenon of psychopaths with some interest and alarm. Psychopaths are dangerous precisely because they have no delusions and lack the emotional weakness of attachment to other living beings. They are incapable of empathy, which is, I believe, the foundation of true morality. They are also supreme realists and therefore have no fear of God, hell, the afterlife or any other figment of religious imagination. Being cynical, they can fake emotion when appropriate and masterfully manipulate other people using a knowledge of their weaknesses. These traits are virtually super-powers in human society, and it is believed that a disproportionately large number of psychopaths are found at higher levels of organisations because they are the only ones cynical enough to lie, cheat, bully, manipulate and backstab their way there. A chilling thought.

When I added psychopaths to my previous line-up of people and viewed them through the two lenses of mystical beliefs and empathy, the picture became much clearer. This is how I think society should be classified in order to understand its relationship with morality. Click on the picture to enlarge. 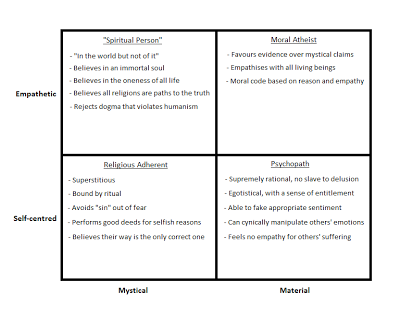 This is the model that finally feels right to me. It makes concrete the reasons for my contempt of organised religions, i.e., because they are characterised by superstition and selfishness.

I place myself in the "Moral Atheist" cell. (I'm increasingly comfortable calling myself an Atheist and not just an Agnostic.)

I now also understand my strangely mixed feelings about "spiritual" people. I have no practical quarrel with them (indeed, they are the best of the other three kinds), and I have many friends in this category whom I like and respect very much.

However, I find the beliefs of "spiritual" people irrational because I cannot believe in mystical notions without proof. Fundamentally, I cannot believe in an immortal soul that outlives the physical body any more than a person can believe that Windows continues to run after they have shut down their computer. Functional MRI has demonstrated the specific areas of the brain that are responsible for various thoughts and feelings, and these aspects of consciousness consume measurable amounts of energy. Once brain cells die, it doesn't seem feasible to sustain the "consciousness" (i.e., thoughts and feelings) that a soul is supposed to be capable of. The hardware and the energy required for such computation are no longer in existence. Therefore, the notion of the immortal soul just doesn't make sense to me, and once this notion is demolished, the entire edifice of "spiritual" belief comes crashing down (although the empathy-based moral system should remain intact). That's why I use the word "spiritual" within quotes. There is probably no "spirit" to speak of.

But as I said, what I consider to be the delusions of "spiritual" people do not interfere in a practical way with our ability to coexist. If the world consisted of only "spiritual" people and moral atheists, there would be no need to look for a Heaven beyond this earth. Life would be extremely kind, gracious, loving and harmonious (with the occasional friendly philosophical debate about the existence of mystical things).

It's the presence of the two other groups that causes suffering and strife, and keeps earth from being heaven. We need different strategies to deal with Psychopaths and with Religious Adherents.

We cannot appeal to the empathy of psychopaths - they have none. We cannot scare or tempt them into pro-social behaviour through the sticks and carrots of a purported afterlife - they know it to be hogwash. In short, we cannot change them for the better. They are "perfectly evolved" predators in the manner of crocodiles or great white sharks.

We will need to protect ourselves against psychopaths by smoking them out and branding them. (I think it's fair to say, with just a touch of irony, that I have no empathy for psychopaths! What are known as "non-criminal psychopaths" are those, I believe, who haven't yet committed a crime or who haven't yet been caught for a crime that they have committed. Their congenitally conscienceless, selfish rationalism practically ensures immoral behaviour.) Although their prodigious manipulative skills help psychopaths elude detection through psychological testing, science seems nevertheless to have found a way to identify them - they lack a sense of smell. What a fortuitous coincidence! If there is a yellow sun that gives these villains their super-powers, there is also a green kyptonite to which they are vulnerable. The same mental impairment that prevents psychopaths from feeling empathy also prevents them from recognising smells, and that is how society must smoke them out, figuratively brand them on the forehead, and steer clear of them thereafter. If future neuroscientific advances can help psychopaths acquire the capacity for empathy afresh, then they could be re-admitted into society.

And that leaves the adherents of organised religions, collectively the most numerous group by far. Given their numerical dominance, the only thing that prevents the world from descending into utter anarchy is the fact that their behaviour largely mimics moral behaviour, thanks to the superstitions they believe in, which play on their greed and fear.

When these people do good, they generally do so in order to secure a better afterlife for themselves (whether the eternal heaven of the Abrahamic religions, or karmic credits for an inevitable rebirth as per the Dharmic religions). When they refrain from evil, they do so out of fear (of eternal hell or bad karma as the case may be). It is scary to think of how these people would behave if they should ever lose their faith in the mystical afterlife, since these imaginary carrots and sticks will then fail to ensure their good behaviour. The morality of religious people is a case of doing the right thing for the wrong reasons, and the harmony of a social system based on this foundation is a rather fragile one.

On the flip side, we have seen too many cases when religious dogma has caused people to commit immoral deeds, such as killing perceived blasphemers, or punishing those who violate religiously sanctioned codes around sexual behaviour (i.e., the harassment of homosexuals, stoning of "adulterers", etc.) These are cases where dogma trumps empathy, and many otherwise empathetic people go against their better natures because of their superstitious beliefs and peer pressure, and end up causing harm to other living beings.

I think there are three possible strategies to deal with Religious Adherents:

If we can get the bulk of humanity into the top right-hand quadrant of the above diagram (traditionally the best place to be), we will have attained something close to what the spiritualists would call nirvana.

And that's my philosophical learning for the day.

Very well written & agree with you. But for the 4th para, would have shared with the kids. Perhaps that's one area religion scores.