The Agnostic Argument - 6 (Society Defers Too Much To Religion)

The protests by Muslims across the world about a movie that they believed insulted their religion reached Sydney yesterday. The protests turned violent and the violence was promptly condemned by public figures, both politicians and journalists.

The standard argument from "reasonable society" goes, "You have a right to protest, but you may not resort to violence."

I have a rather more hard-line argument: "You have the right to believe in any religion, but not the right to be respected for it." If someone laughs at you or insults you for your faith, well, just develop a thick skin because you're going to need it.

That's a lesson the religious need to be taught. You may absolutely hate what someone is saying, but you will just have to learn to accept it. And public officials in democracies whose salaries are paid for with taxpayers' money and who have pledged to uphold their respective constitutions will have to stand up for this principle much more strongly. It's not just violence that's reprehensible. It's the attempt to shut down free speech.

Be that as it may, free speech is for adults because adults are expected to be able to handle it. Children need extra protections, and not just in cases of bullying. This is something I find absolutely unacceptable: 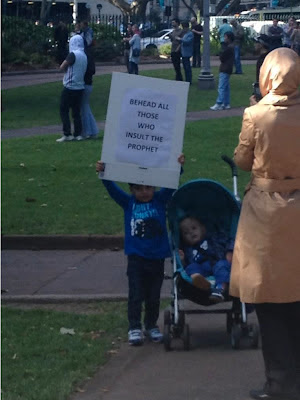 While the sign itself is disturbing, adults can and must learn to handle it. But children must absolutely not be exposed to such nonsense. It is tantamount to child abuse.

It is pointless having movie classifications to protect children from images of violence if they are going to be exposed to it by their own parents.

This isn't just about Islam, although Muslims seem to be among the world's touchiest people. If you want me to prove my even-handedness, I have contempt for those whose sentiments were offended by swimwear bearing pictures of Hindu deities on them. 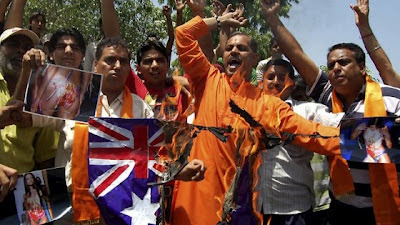 President of the Universal Society of Hinduism, Mr. Rajan Zed (who has earned a mention on this blog before) said

Let me get this straight. Lakshmi is the goddess of wealth, and it's perfectly acceptable for businessmen to pray to her for profits, but one shouldn't use her images to further "mercantile greed"? Did Rajan Zed say that with a straight face?

(At any rate, the swimwear company quickly capitulated and apologised, much to my disappointment and disgust.)

Thankfully, Christianity does not seem to wield the same kind of power in its homelands. The work titled "Piss Christ" (a work of "art" in such awful taste that I have to hold my nose as I defend its creator's freedom of expression) was destroyed in an act of vandalism in Australia, but did gather more than a modest number of defenders.

Offended sentiments are the luxury of the superstitious, because in a rational world, the truth or otherwise of an assertion can either be proven or deferred till future research settles the issue. What rankles deeply is that society (through its official figures) feels obliged to apologise for the offence taken by superstitious people when a contemptuous laugh would be more appropriate.

I belong to a burgeoning tribe of agnostics, atheists, rationalists and allied people who have contempt for organised religion and resent the way society bends over backwards to accommodate the sentiments of the superstitious.

Ours is a cold rage, but it cannot be ignored for long.
Posted by prasadgc at 07:01